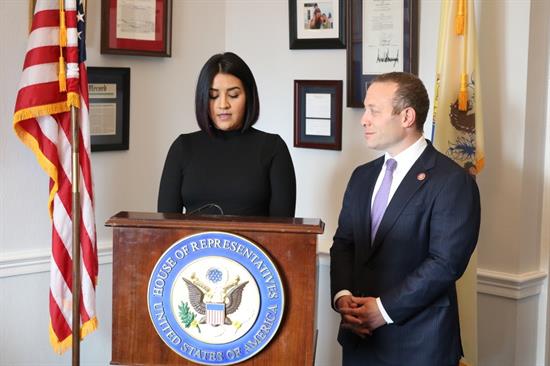 Rep. Josh Gottheimer is creating an award to honor the service of a Bergen County man who was killed while serving his country in Afghanistan in 2019.

The congressman made the announcement with Jen Albuquerque, the partner of Goble and Gottheimer guest for the State of the Union address.

Goble, a North Jersey native, was killed in Afghanistan in December 2019 while serving as a member of the U.S. Special Forces. Goble was with his unit in the Kunduz Province clearing out a Taliban weapons cache when he was fatally injured from an explosion.

Albuquerque, who has a six-year-old daughter with Goble, called him a “true patriot” who died making the world a better place for all of us to live in.

“Mike was just like many of us, with hopes and dreams,” she said. “But Mike was also different. Mike was a Green Beret, one of America’s finest warriors. Mike loved his job and he loved his country. He died while fighting our nation’s enemies.”

“It is our duty as Americans not only to honor these men and women, but to do everything we can to fight for their surviving loved ones, to ensure they have the care they need, and the support we all owe them,” said Gottheimer .

To that end, Gottheimer will cosponsor and lead a bipartisan letter calling on House leadership to bring up the Dependency and Indemnity Compensation Improvement Act for an immediate vote. This bipartisan legislation increases the benefits of Gold Star families who lose a family member in battle.

“Together, by taking care of our military families, surviving loved ones, and veterans in North Jersey, continuing to work across the aisle, and fighting for change here in Congress, we can live up to our nation’s commitment to those who gave the last full measure of devotion,” declared the North Jersey congressman.