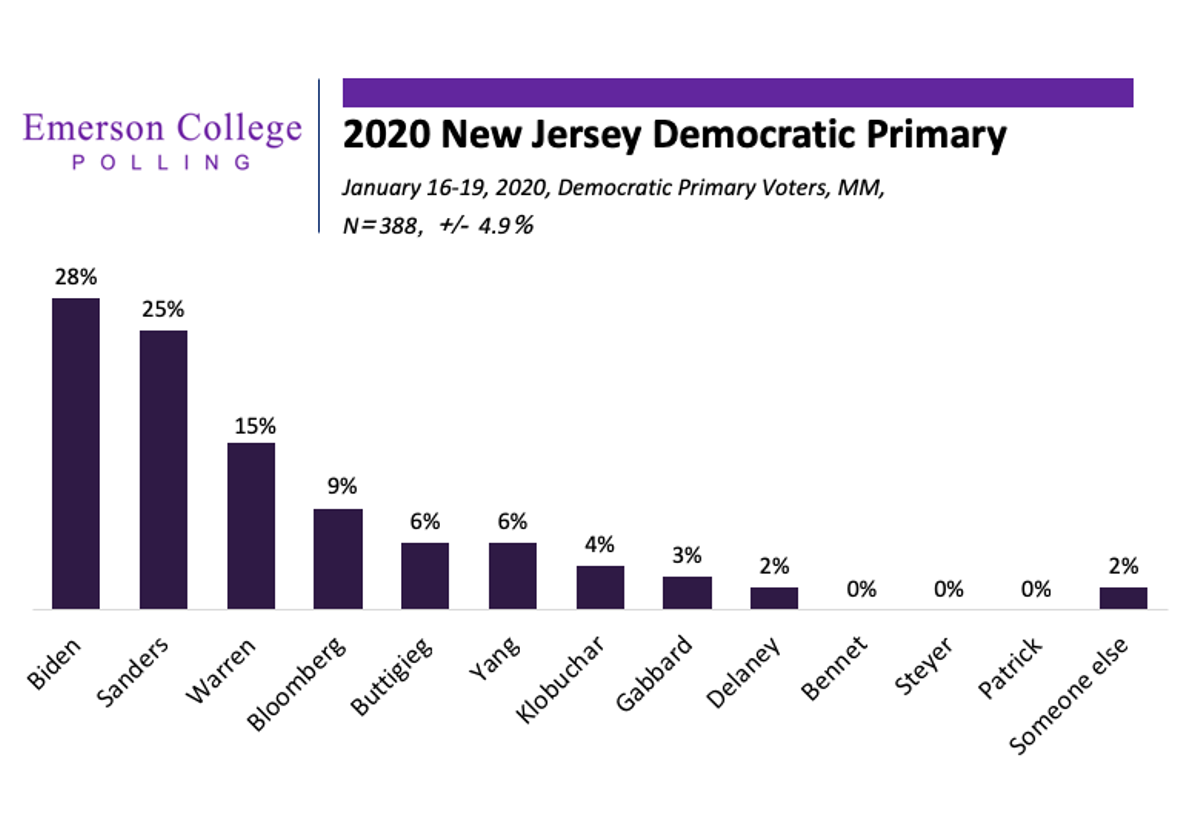 Former Vice President Joe Biden is the current leader for the Democratic nomination in New Jersey,  with a three percent lead over Sen. Bernie Sanders, according to Emerson College Poll.

The poll, conducted between Jan. 16-19, shows the former Delaware senator at 28% of the vote, trailed by Sanders at 25%, Senator Elizabeth Warren at 15% and former New York City Mayor Michael Bloomberg at 9%. Former South Bend Mayor Pete Buttigieg and Andrew Yang were tied for 5th at 6% each.

Bloomberg’s 9% is the highest for the late entering candidate in any state poll this year, according to Spencer Kimball, Director of Emerson College Polling.

“If his late start strategy is going to work, he will need to perform well in delegate-rich states such as New Jersey at the end of the nomination season,” Kimball stated.

On the Republican side, President Donald Trump dominates his Republican rivals with 93% of the vote.

But while the numbers are favorable at this point for Biden, the election is still volatile. About 52% of Democratic primary voters indicate they could change their mind and vote for another candidate by June, while 48% are locked in for their choice.

Support for each candidate follows national trends when broken down by demographics.

Warren is the third most popular candidate in all four age groups with a range of 12% to 22% support and 19% of women supporting the Massachusetts senator.

Sanders currently captures 27% of the white votes in the state, with Biden at 23%, and Warren at 13%.

Dems Expect Biden to be Nominee

Despite the poll showing no clear favorite at this point, 55% of voters expect Biden to be the nominee. Sanders is the next expected choice at 22%, and Warren is at 10%.

The support for Biden follows a similar pattern of a poll released the week before about the New Hampshire primary, said Emerson’s Kimball.