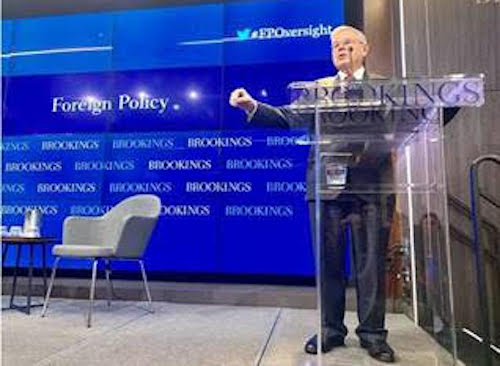 Sen. Bob Menendez recently laid out reform proposals in the wake of the impeachment trial of President Donald Trump’s conduct regarding Ukraine.

A ranking member or the Senate Foreign Relations Committee, Menendez said Congress must learn the lesson from the Ukraine scandal to better serve as a check to its co-equal branch on the office of the President at remarks delivered at the Brookings Institution.

The New Jersey senator plans to introduce a series of proposals to respond to the abuses of power, including the Marie Yovanovitch Act ensuring the U.S. government supports and protects career officials and diplomats.

In warning about the sense of urgency for enacting his proposed reforms, Menendez noted: “Before we find ourselves talking about the next Ukraine scandal, before we are bemoaning yet another set of inexcusable actions, I suggest we do something now.” Those actions include:

Additionally, Menendez laid out a vision to reaffirm the U.S. commitment to Ukraine, a key ally in fighting Russia. Building on his prior successful sanctions on Russia for its unjustified aggression, the Congress must immediately send a unified, bipartisan message that Ukraine will remain a top priority through increased military and development assistance, stated the senator.

“We stand with Ukraine against Russian aggression because it is in our national interest to do so. It is a defense of our democratic values and everything that we have fought for since the end of World War II,” said Menendez.