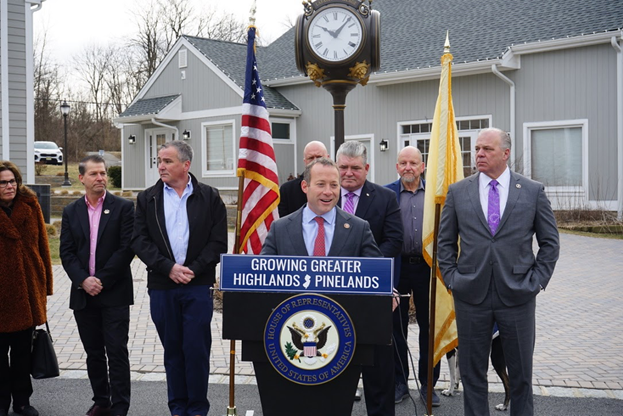 Rep. Josh Gottheimer, along with state Sens. Steve Sweeney and Steve Oroho. were on hand to announce the plan to reduce sales and property taxes, boost collaboration for the regions’ local businesses, and task the Highlands and Pinelands Councils with studying measures to improve economic growth in the region.

“We have all supported efforts to grow the economies in our urban areas, but we need to grow in all areas of the state and expand local economic opportunities for all New Jerseyans,” said Sweeney, the state senate president.

The Greater Highlands Region will consist of the existing Highlands Preservation and Planning Areas with an expansion into the remainder of northern Warren and Sussex counties.

The economic development plan features the establishment of a rural enterprise zone program to benefit the greater Highlands and Pinelands regions, require the state to invest more in and support businesses within the regions, task both councils to study ways to expand and improve economic development and seize the opportunity of eco- and agri-tourism, along with retail investment to improve the regional economy.

“Given the explosion of eco-tourism and the remarkable potential here in the Greater Highlands and in the Pinelands, there is simply no reason why we can’t create and attract more jobs and businesses to these regions, whether that’s new retail, experiential, tourism, high-skilled manufacturing, STEM jobs—you name it,” said Gottheimer.

“With this bipartisan plan, we are encouraging tourism, helping job creation, supporting our local businesses, cutting both sales and property taxes, and boosting the Greater Highlands economy at every angle.”

The area’s growth has been stagnant, leading to a 7% to 10 % decrease in property values, foreclosure rates nearly four times the national average, and contributing to New Jersey’s ranking as the top state in the nation for outmigration.

The establishment of the rural enterprise zone program will reduce sales taxes to 4.3%, with one full point going directly to reduce property taxes. The zone will offer additional economic benefits including financial assistance for businesses from state agencies, including through public-private partnerships with the New Jersey Economic Development Authority, exemptions from energy sales tax for qualified manufacturing firms and tax credits for qualified investments.

In regards to requiring the state to invest and support businesses, an online portal will be established to promote collaboration and innovation among qualified businesses as well as publishing the availability of state and local resources.

Both councils will be tasked with producing annual public reports detailing ways to improve economic growth, expand infrastructure development, and reduce property taxes. The reports are to capture the state of the local economy and make recommendations, including ways to better seize on new opportunities, such as eco-tourism and STEM jobs.

In looking to grow the economy, a key element will be promoting eco-tourism and retail businesses in the regions. With an increase in retail investment, state and local tax revenue are projected to grow. Advertising campaigns will be built on such natural resources as the Delaware Water Gap and the Appalachian Trail to compete with neighboring tourism areas in Pennsylvania and New York.