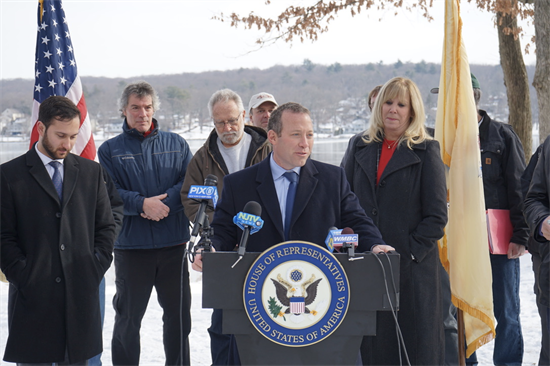 Gottheimer appeared before a subcommittee of the House Committee on Transportation and Infrastructure focusing on water infrastructure projects undertaken by the U.S. Army Corps of Engineers. The congressman wants the renewal of the Water Resources Development Act (WRDA) to include resources to identify and remove lead pipes in their water infrastructure.

“I am confident that if we work together, we can bring clean drinking water to every community and school, and stomp out Harmful Algal Blooms for good,” said Gottheimer.  “(I made) clear to my colleagues in Congress just how important it is to make progress on combating the threat of lead water and toxic algae in North Jersey.”

“Every child deserves to drink water that’s free of lead, and every parent deserves to know if their child’s school has lead in their pipes, sinks, or water fountains.”

“Simply put, this problem will not fix itself, and we must take immediate action to help schools and communities nationwide address this urgent issue,” he stated.

Last Fall, Gottheimer and state officials announced steps to provide parents and communities with easy-to-access and up-to-date information on dangerous lead water in their children’s schools.

“In my district, I issued a comprehensive report which found that 12% of 85 school districts did not report the results of lead testing on their district website for parents to see,” said the representative. “And of the 88% of school districts that did post lead testing results, 52 districts indicated at least one outlet within their system that had a problem with lead in their water.”

For Gottheimer, focus on ensuring bodies of water utilized for recreation and tourism are safe is needed as well. In 2019, HABs broke out in Greenwood Lake, resulting in lost revenue for small businesses relying on lake eco-tourism as well posing a severe health hazard to visitors and wildlife.

In November 2019, Gottheimer met with New Jersey congressional, state, local, and environmental leaders to combat HABs in the state’s lakes. The congressman followed that up this year, teaming with the Greenwood Lake Commission in calling for emergency investment to combat HABs.

“Given the impact of climate change, these higher temperatures are likely not a one-off occurrence, but now just part of our every day,” he said. “Just like with other environmental emergencies, we need to act. It will take a comprehensive strategy, working together—a true local, state, and federal partnership.”

The HAB’s in the state was caused by a perfect storm of warmer than usual temperatures combined with rain and phosphorus run-off from mountains, roadways and fertilizers, the congressman stated in his testimony.

“I am calling on this committee to help our pristine, world-class lakes combat HABs by authorizing funding to more deeply study the causes, and invest in effective solutions,” said Gottheimer. “Many lake commissions, including Greenwood Lake, are strapped for cash, and would greatly benefit from additional federal investment to prevent further environmental disasters caused by HABs.”