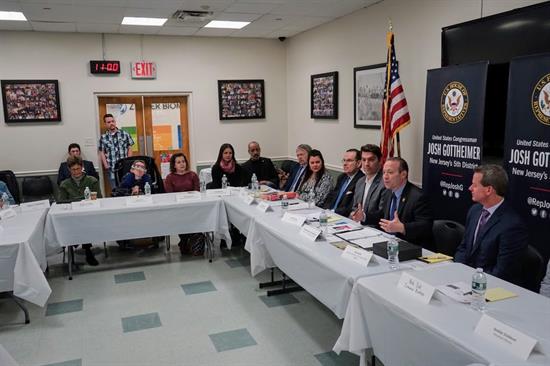 A five-year-old Wyckoff resident is having a bill named after him in a bid to increase research and development dollars to fight orphan diseases.

Rep. Josh Gottheimer is a bipartisan co-sponsor of Cameron’s Law, which would fully restore the Orphan Disease Research Tax Credit, following the 2017 Tax Hike Bill that cut the credit in half and made treatment for rare diseases even rarer.

This bipartisan legislation is named after five-year-old Cameron Hyman of  Wyckoff, who is diagnosed with the rare disease Sanfilippo Syndrome, which affects the central nervous system. Right now, there are no FDA-approved treatments for Sanfilippo Syndrome.

“With Cameron’s Law, we will invest and restore the Orphan Drug Research Tax Credit to its original levels and give our best and brightest—many of them right here in Jersey—a fighting shot to find effective treatments for rare diseases and, eventually, find a cure to the most ruthless diseases that plague our families, loved ones, and neighbors,” said Gottheimer.

The family recently established the CAM Foundation to raise funds to help invest in trials and to find a cure for his degenerative disease.

“This tax credit will give families like Cameron’s the resources and hope for curing these rare diseases,” stated the congressman, who lost his mother to a rare disease, Sarcoidosis, in 2018. “It will give everyone here more research opportunities so that we can all come together and continue to ensure New Jersey is a leader in this area.”

“Here in New Jersey, we have some of the best hospitals and medical facilities in the country, the best doctors, medical school graduates, nurses, and life sciences leaders—and we need to keep growing that talent pipeline so that we can come together to cure and treat rare diseases, some known as orphan diseases—those that often don’t get the attention and investment they need and deserve,” said Gottheimer.

The Orphan Drug Act passed was signed into law by then-President Ronald Reagan in 1983. Before becoming law, only 38 orphan drugs for rare diseases were approved for use in the U.S. By 2014, 373 drugs for rare diseases were approved. The credit has been used to help those with mesothelioma, multiple sclerosis, cystic fibrosis, and bone marrow disorders, with discoveries made in labs across the U.S.

Gottheimer pointed out New Jersey is one of the leading centers in the world for life sciences and innovation, with 12 of the world’s top 20 research-based biopharmaceutical companies.

New Jersey ranks second in cancer treatment drug development, and second for heart and stroke drugs and development. In 2017, 50% of all new FDA approvals came from companies with a New Jersey footprint.

More than 372,000 New Jersey jobs are supported by the life sciences sector with $96 billion in total economic output annually.