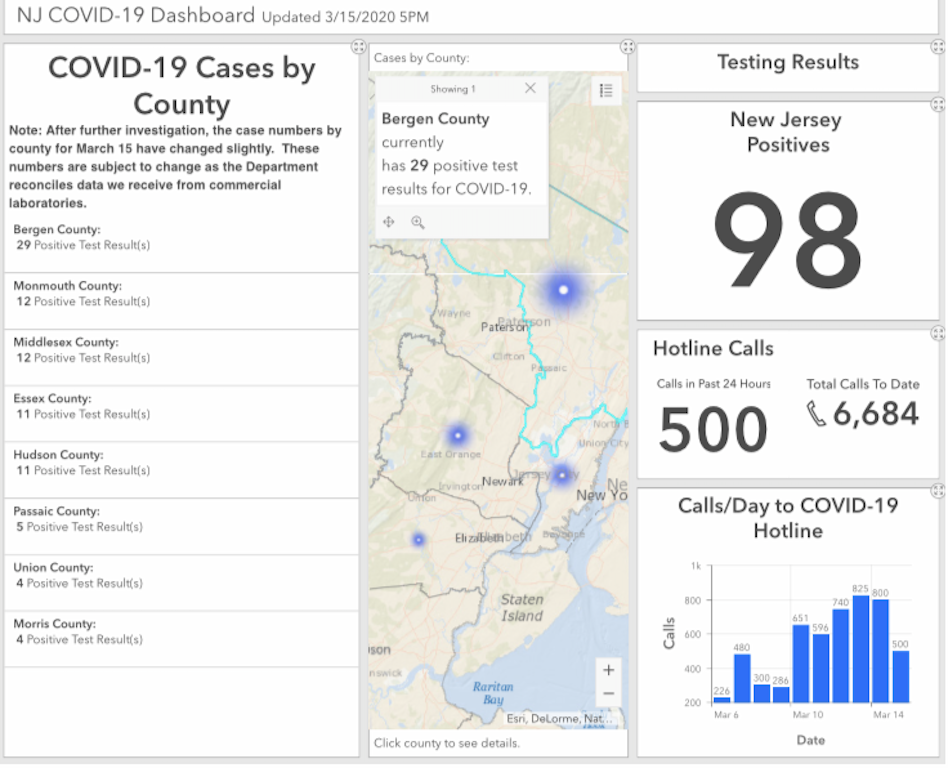 Gov. Phil Murphy said it’s a “99% certainty” New Jersey is likely to announce all public and private schools are to be shut down to minimize exposure to Covid-19.

The governor expects to announce the closing on March 16, leaving the final decision open as the state figures out how it will provide for the approximately 210,000 students who rely on schools for food and 259,000 students who don’t have access to a device at home to take instruction online. About 400 of the state’s 600 public school districts already closed to protect against the virus.

State Education Commissioner Lamont Repollet said officials have not decided for how long schools would be closed and did not provide other details about the plan, such as whether students or school staff will have to report or if staff members will continue to get paid.

As of March 15, the number of coronavirus cases in New Jersey climbed to 98, with 29 new cases announced by the state. The numbers by county were led by Bergen at 29, followed by Middlesex and Monmouth with 12, Essex and Hudson with 11, Passaic with five, Burlington, Union and Morris with four, Camden and Ocean with two and Mercer and Somerset with one each. So far, only two deaths have been announced, one in Bergen County and one in Ocean County.

With the most cases in the state, Bergen County Executive James Tedesco told residents to prepare for new rules aimed at limiting public exposure to the virus. Tedesco said he’s already spoken to town mayors about potential business and mall closures, with saving lives taking precedence over lost wages and jobs,

“The self-quarantining in Teaneck and the decision to close our schools will help mitigate the spread of coronavirus,” said Gottheimer. “These proactive approaches will help stem the rising tide of this virus.”

Tedesco, joined by Teaneck public officials, stated stricter rules will be enforced throughout the county in the coming days.

“Teaneck is a model we will use for towns throughout the county,” he said.

Teaneck, which the day before told its residents to begin to self quarantine due to the high number of cases reported, placed further restrictions on business.

The town is shutting down businesses that demand more physical contact, such as daycare centers and gyms, while requiring restaurants to operate as takeout and delivery only.

Further, the town placed restrictions on the number of patrons at local groceries, which will be strictly enforced, as the local Stop & Shop is limited to 50 patrons at a time and two smaller ones to 25.

bergenPAC closed its productions and its performing arts school after state and county officials banned the gathering of more than 250 people.

The performing arts center is working to either reschedule or cancel all performances through March 31 with decisions about April events to be made closer to the dates of those performances. If shows must be cancelled, refunds will be given at the point of purchase.

Other towns in North Jersey are following the lead of Teaneck and Hoboken, which closed down its bars and restaurants and began enforcing a curfew.

Ridgewood informed its residents it has closed all its offices, playgrounds and recreational sites and urged local restaurants to impose limits under a municipal state of emergency declared March 15. The state of emergency is until further notice.

The village is wants all restaurants and bars to use takeout and curbside delivery rather than in-restaurant dining, and to reduce seating capacity to increase space between groups of patrons

In Essex County, Montclair issued its own emergency order, following the state’s guideline of  prohibited gatherings of more than 250 people. In addition, bars and restaurants are prohibited from serving food or alcohol on the premises after 10 pm or before 5 am, and all customers must leave by 10 pm through the end of March. The order allows takeout or delivery services.