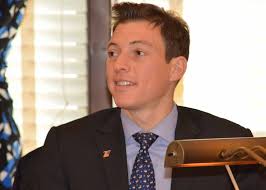 The first politician in New Jersey disclosed he has tested positive for the coronavirus.

The 34-year-old Assemblyman started feeling ill and experiencing flu-like symptoms on March 12. While he said he was back to feeling normal March 16, he chose not to attend the Assembly voting session that day. His last visit to the Statehouse took place on March 5.

Upon teleconference consultation with his doctor, it was recommended Calabrese seek testing due to interactions as a legislator despite having a very mild case.

“I feel fine and have been in self-quarantine for five days at this point,” Assemblyman Calabrese said in a statement. “I want to ensure my friends, colleagues and anyone else I may have had contact with is aware of these facts. I am extremely thankful for the tremendous work our medical professionals are doing and strongly urge all people of our state, especially the younger generations, to be acutely aware of their risk and to take precautions by adhering to current state protocols.”

Calabrese represents two of the counties especially hard hit in the state. As of March 22, the number of coronavirus cases in New Jersey climbed to 1,914 with 590 new cases and four deaths, bringing that total to 20. The four new deaths included a Bergen County man in his 90s and a Passaic County man in his 80s, both with underlying medical conditions.

The day after telling residents to stay home, Gov. Phil Murphy promised police enforcement will begin at what he perceives as people not adhering to his order.

“There’s too many people not paying attention to this. We’ve about had it. We’re not happy,” Murphy said.”If folks are monkeying around, we will take action.”

Under Murphy’s order, social gatherings of any size are banned in the state. People are not allowed to gather in groups and should practice social distancing. Individuals or businesses that don’t follow Murphy’s executive order will face a disorderly conduct charge, said State Police Superintendent Pat Callahan. A person with a disorderly conduct charge faces up to 364 days in jail and up to a $1,000 fine.

“We banned any social gatherings in the state. We want people to stay home,” he said. “We want all of these steps to be enforced aggressively.”

With the order now in effect, Murphy directed departments in his government to ensure access to telehealth and tele-mental health services for state residents to the greatest extent possible during the COVID-19 outbreak.

This comes days after he signed legislation authorizing any healthcare practitioners to provide telemedicine and telehealth services for the duration of a declared public health emergency.

The departments of Human Services, Banking and Insurance, Treasury, Health, Children and Family Services and Consumer Affairs were authorized to identify opportunities to support broader access and go forward when opportunities arise, including the waiving of co-pays, allowing patients to use services from the comfort of their own homes, and increasing flexibility in the technological platforms used to deliver services and more.

New Jersey Residents Must Stay At Home; Gov. Phil Murphy Expects Order to Be for Weeks