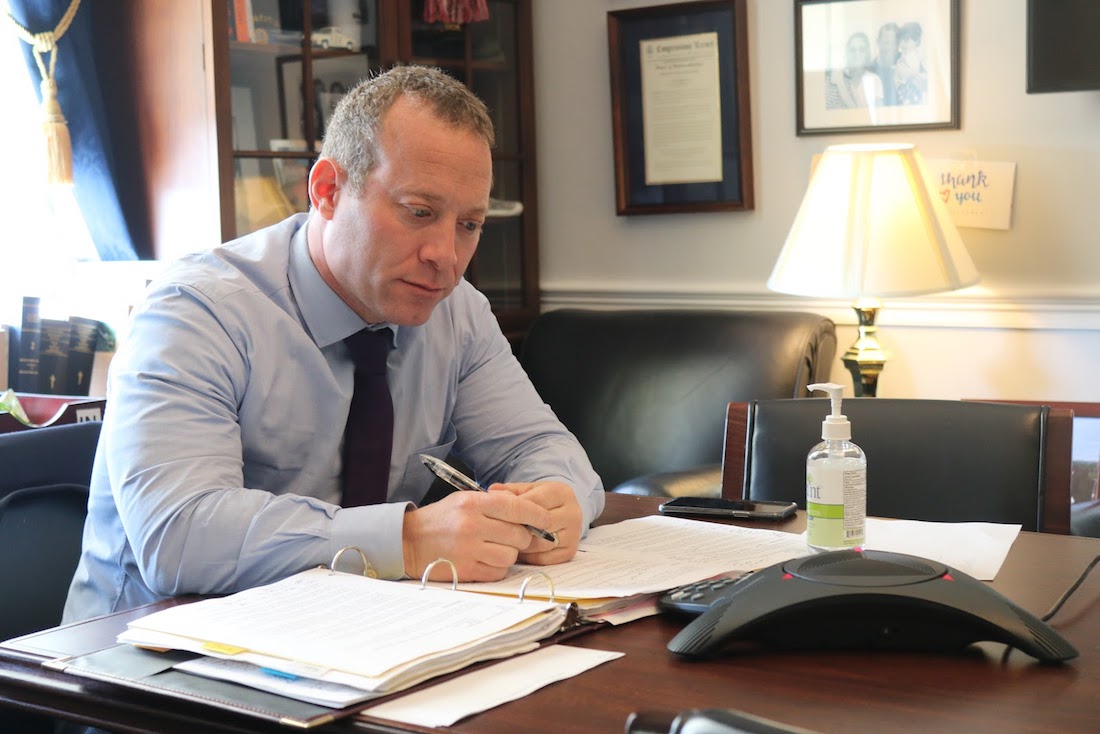 Two North Jersey politicians placed themselves in self quarantine on March 24 as the number of residents affected by COVID-19 continues to climb.

Rep. Josh Gottheimer and Bergen County Executive James Tedesco are self-quarantining after attending a press conference with Michael Maron, the president and CEO of Holy Name Medical Center in Teaneck on March 15, who later tested positive for the coronavirus.

The congressman and the county exec were advised to get tested and self-quarantine pending the results despite both being symptom-free.

As of March 24, the number of coronavirus cases in New Jersey climbed to 3,675 with 846 new cases announced by the state and 17 new deaths, bringing that total to 44. The new deaths include cases in five in Bergen, three each in Morris and Essex, two in Hudson and one each in Monmouth, Camden, Passaic and Union counties.

Officials reported for the first time Bergen was not first. Essex and Passaic both reported 63 cases followed by Middlesex at 62 and then Bergen at 61.

Another 645 cases are still under review to determine where the person resides, state health officials said.

The state estimates of the 12,000 tests of symptomatic individuals in the state who have taken the test, 27% have had a positive test. Further inside those numbers, about 35% of New Jersey cases are people between the ages of 30-49 and overall about 24% of those have been hospitalized.

The data will allow health officials to model what is happening in the state and how to manage as to flatten the curve.

“We are trying to limit, or spread out, the number of new cases,” said State Health Commissioner Judy Persichilli. “We will not eliminate them.”

Murphy added, “We need patience and we need people to stay at home. The number may be the same but flattening allows us to manage it is manageable for the health care system.”

The governor said he was hearing of too many companies not allowing people to work from home.

“Companies are deeming all employees essential or flat out refusing to follow the order,” said Murphy. “It is an order…there must be 100% compliance with. It’s about saving lives.” .

While getting the message out that the stay at home order would be strictly enforced, the governor later altered the order and hinted he was considering expanding another.

The order clarified municipalities may impose additional restrictions on beaches and boardwalks as well.

Meanwhile, the governor revealed he is moving closer to ordering children daycare facilities closed in New Jersey amid the coronavirus outbreak, but wanted to make sure emergency and medical workers have day care options.

“I am personally migrating toward a decision that, assuming first-responders and health-care workers (can be addressed), we close daycare centers,” Murphy said. He estimated about 80% of daycare centers are closed already.

Persichilli said a solution is needed because 40% of nurses across the state are single parents and/or primary caregivers. “We need the nurses on the frontlines. Good child care is imperative,” she said.

Those frontline healthcare workers will be needed as Federal Emergency Management Agency (FEMA)  gets set to open four field hospitals in the state.

A fourth one will be temporarily housed in Wall Township as the state analyzes the most effective place to set that up. Each field hospital will have 250 beds.

New Jersey was granted a federal waiver to cancel student standardized testing scheduled for April amid the statewide coronavirus shutdown. Murphy had stated before receiving the approval that with schools closed and all students remote learning and not in their regular classrooms, it was not feasible for the state to move forward with testing.

New Jersey mandates that high school students pass a state exam in math and English in order to graduate. Murphy said that the decision to cancel tests will not impeded students from graduating.

The state launched a new online portal to connect New Jersey residents with jobs in critical industries responding to COVID-19 as well as an intake tool for employers seeking to have openings posted on the portal.

“The jobs portal will give residents who have lost their jobs or seen their hours reduced an opportunity to get back to work while also providing crucial support to the industries that are on the frontlines of fighting this pandemic,” stated Murphy.

The jobs portal has more than 12,000 openings in industries critical to New Jersey’s COVID-19 response, such as grocery stores, shipping and logistics, healthcare, janitorial services, human services, and warehousing.

The governor believes by connecting workers to these new openings, the tool will allow New Jersey residents to get back to work while increasing these key industries’ capacity to perform their essential duties.