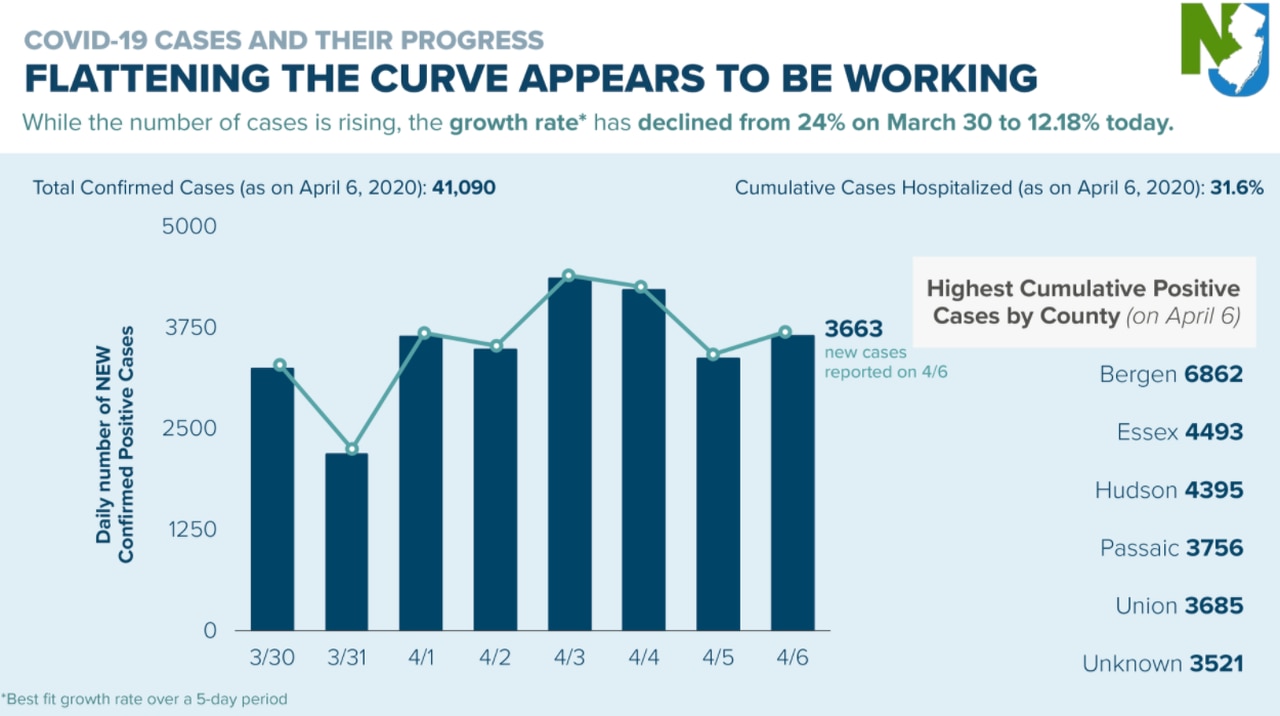 For the first time since the residents of New Jersey were ordered to stay at home, Gov. Phil Murphy provided evidence the tactics employed by his administration was slowing down the pandemic in the state.

State officials reported the curve in the state is beginning to level out as the projected peak in cases could happen between late April and early May.

“(There’s been) a decline in the growth rate of new cases from 24% day over day on March 30 to roughly 12% day-over-day (April 6),” Murphy said. “This means our efforts to flatten the curve are starting to pay off.”

Murphy went through different models to show the effects the coronavirus had and could have depending on actions taken by officials and residents of the state.

“We’ve built a strong modeling program that we can use with great and increasing confidence,” stated Murphy. “When we began our preparations for responding to this emergency back in January, we knew that only an objective, fact-based, Moneyball approach would get us through this.”

According to the governor, this approach has shaped the state’s aggressive stance on social distancing.

“While we are not anywhere close to being out of the woods just yet, we are clearly on the right path to get there,” he said. “It will be tough and it will be stressful, but our health system can get through this intact.”

Health Commissioner Judy Persichilli said 84,768 tests have been performed with 36,826 people, or about 44% of thoses tested, having COVID-19 while 47,942 people tested negative for the coronavirus.

The breakdown does not include 3,821 cases and one death still under investigation to determine where those people reside.

There were 6,390 COVID-19 patients hospitalized in the state as of April 6; of those hospitalized with the virus, 1,505 patients are in critical care.

No Spiking of Footballs

“If we relax our social distancing, our health care system will be overrun with a surge four times what it could be. That would be literally disastrous,” said Murphy. “This is no time to spike any footballs or to take our foot off the gas. We still have a week-and-a-half to go, at least, until we hit the peak. This isn’t over—not by a long shot.”

FEMA will keep open two COVID-19 testing sites through May in New Jersey, located at Bergen Community College in Paramus and the PNC Bank Arts Center in Holmdel that were slated to be closed by the Federal Emergency Management Agency (FEMA).

Rep. Bill Pascrell said the efforts of the workers on the frontline workers will only succeed by not just maintaining but expanding our testing capacity.

“The feds are right to reverse their ill-conceived plan to pull up stakes at test sites as our state maintains the second-worst infection rate in the nation and endures perhaps the worst crisis in our state’s history,” said Pascrell.

While state officials agree more testing is needed, so is manpower. Murphy signed an executive order allowing retirees to return to state and local government employment without impacting their retirement pensions and removing restrictions on law enforcement’s ability to temporarily supplement their ranks.

“Right now, we need all the experienced help we can get, whether it be retired law enforcement officers returning to duty, or nurses who can return to University Hospital,” said Murphy. “(The) order will remove roadblocks preventing retired public employees from joining our fight against COVID-19—in any capacity they can—without impacting their pension status.”