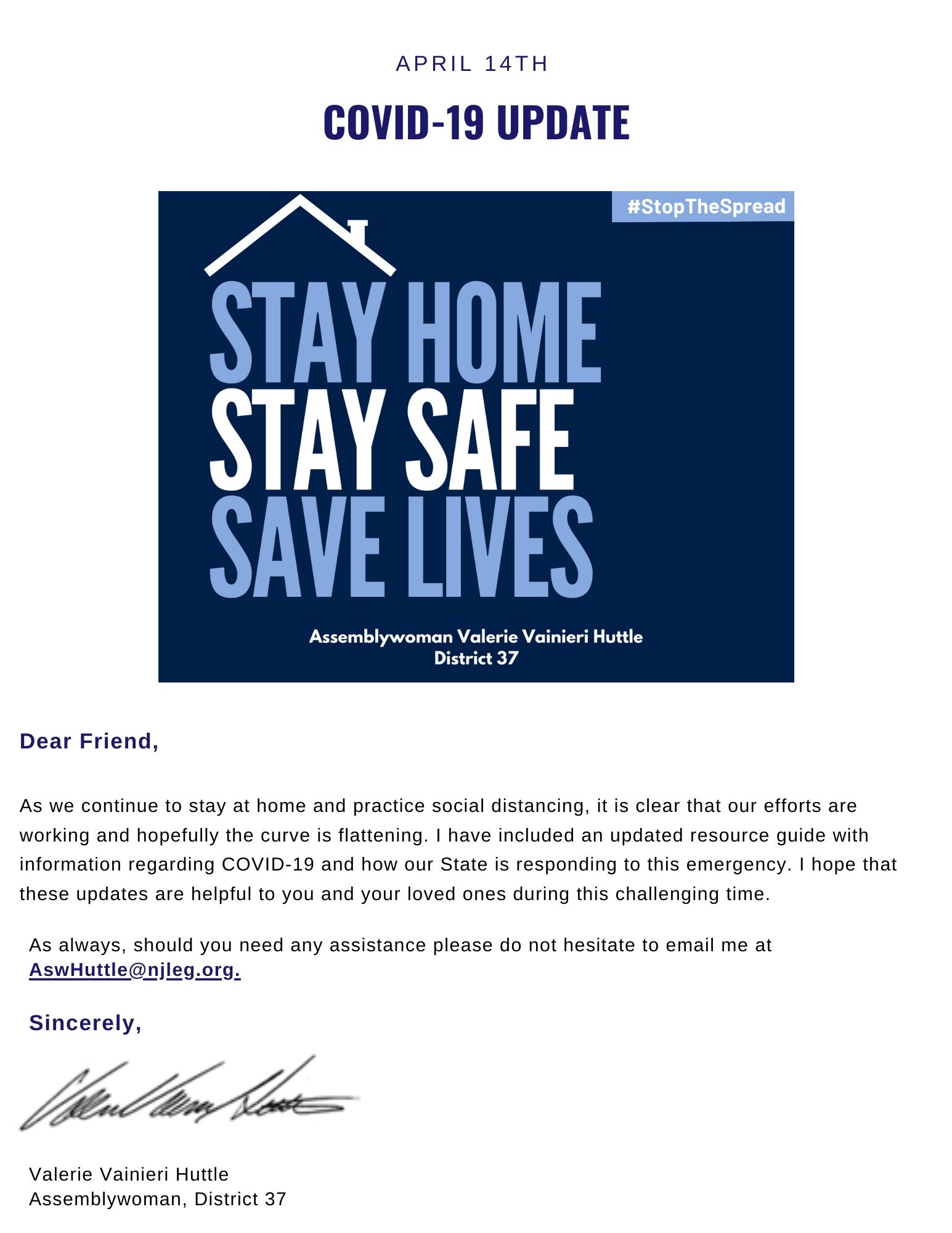 As with most households in North Jersey, teleworking has been an adjustment for Assemblywoman Valerie Vainieri Huttle.

“I feel that we are busier than ever,” said Huttle (D-37). “Working from home, the days seem longer as you try to answer every email and phone call that comes in.”

The assemblywoman closed her district office in March and now coordinates daily with her staff on efforts to help those in her district. Huttle said two of the most pressing issues are constituents filing for unemployment, and working with small businesses filing for federal aid to keep their companies afloat.

While this may be as Huttle says the “new normal,” the deputy speaker keeps up with her duties by talking to her colleagues on a regular basis, via phone and email, instead of the halls of the capitol building in Trenton. Additionally, Huttle is involved in standing weekly calls with Gov. Phil Murphy and Bergen County executives, while making sure to check in with hospital associations in her district to see what they need.

Huttle praised Murphy and his staff for all the work they have done, stating she is “following their lead as they know what is best.”

As part of her efforts to work for the residents of Bergen County and to keep them informed, Huttle is sending out an email with the latest news and resources available during the pandemic.

Getting the Word Out

Included in the latest email are resources available through the state’s COVID-19 website, specifically for business owners and job seekers; volunteer services for those looking to donate blood and personal protection equipment; recent legislative updates on items including laws expanding paid family leave and employment protections for first responders; and updates on changes brought on by the pandemic, including tax filings, educational opportunities and new programs from the New Jersey Economic Development Authority.

Huttle said that the newsletter helps keep everyone updated as “every day brings another issue, another new executive order…there are new rules daily.”

The Assembly recently held its second voice voting session April 14. Most of the bills passed codified Gov. Murphy’s executive orders resulting from the pandemic. Huttle was a co-sponsor of a bill aimed at bolstering the state’s workforce during the current public health crisis.

The bill permits certain former public employees, including police officers and firefighters, to work as temporary employees without having to re-enroll in the pension system. These temporary workers would be eligible for the State Health Benefits Program or be allowed to retain health coverage under the state’s retiree benefits program if applicable.

The legislation further allows exceptions to usual law enforcement policies during the public health emergency, including waiving the mandatory retirement age for officers, to make sure police departments have enough staff to assist during this crisis.

Huttle remarked that “voting went smoother the second time—remember, we have 80 voice votes to record. These bills are not being vetted as they usually would by committees in a traditional fashion; most votes were COVID-19 related and need to be passed quickly.”

The latest session included a caucus meeting at 11 am followed by votes in the afternoon. The assemblywoman noted only one vote, dealing with the immunity for healthcare workers, needed clarification. Huttle was heartened all but one bill passed in a bipartisan matter.

“It’s nice to see that we are working together in these difficult times,” she stated.