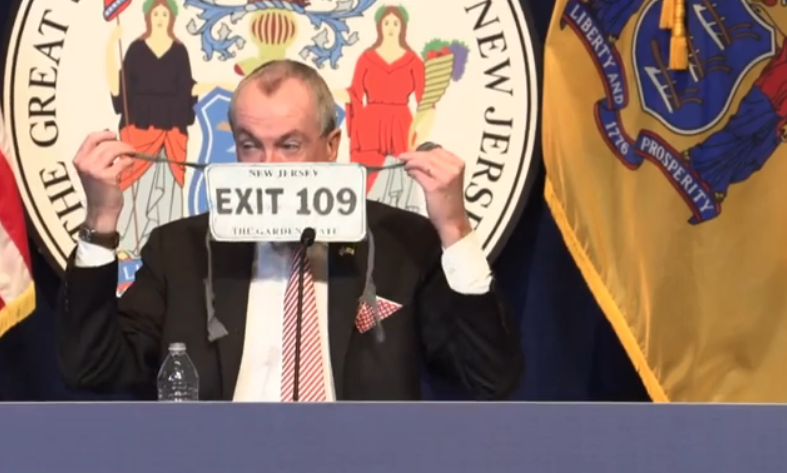 While proud of the great job the residents of the state have done in fighting the coronavirus, Gov. Phil Murphy still has “nightmares” the situation could easily go backwards.

“We are going in the right direction,” said Murphy. “Every day (residents) are doing the right thing…but one misstep and we are back to the worst case scenario.”

New Jersey has taken some of the most-aggressive positions of any state in America to slow the spread of COVID-19. For example, it is the only state requiring masks being worn in stores.

“We’ve asked you to make tremendous sacrifices with us in this fight,” said Murphy. “Some of them may seem like nuisances, but every step we’ve taken has been made out of sheer necessity.”

The democratic governor said that nothing would make him happier than to have been overprepared.

“That’s our new best-case scenario, because that means you took to heart our call to social distance at all times and to stay home,” Murphy said.

When the state comes out on the other side, Murphy painted a picture that life will be changed as the state gradually opens.

“The new normal probably won’t look like the old normal, at least at first,” Murphy said. “The notion (that we ) go back to just turn the clock back to three months ago, I just don’t see it. People talk about a new normal, and I think that’s a reality.”

For example, the governor said a re-opened business like a restaurant would still have social distancing with capacity capped at 50%, temperature or rapid coronavirus saliva tests at the door and servers masked and gloved.

But while pleased with the progress that state has made in flattening the curve, Murphy warned cases and deaths are still increasing, and residents need to keep staying inside and practicing social distancing.

As of April 15, the number of coronavirus cases in New Jersey climbed to 71,030 with 2,625 new cases and 351 new deaths, bringing that total to 3,156. The one-day total in deaths represents over 10% of the total to date. Murphy noted a significant number of the new deaths reported occurred over Easter weekend.

The racial breakdown of the record deaths was 51% white, 22% black, 16% hispanic, 6% Asian and 5% another race. State officials noted that deaths in the black community were running about 50% more than their percent of population in the state.

Murphy said that the crisis “has shined the light” on the inequalities causing a higher rate, including living in more densely populated areas, lack of access to healthcare and a majority of essential and front line workers being black.

There are another 1,189 cases and two deaths still under investigation to determine where the person resides.

The state has processed 131,967 coronavirus tests of symptomatic individuals since the outbreak began, with a 44.7% testing positive for COVID-19. The state reported 8,270 patients are hospitalized with coronavirus with 709 discharged on April 14. Of those hospitalized, 1,980 are in intensive care units and 1,705 are on ventilators.

Overall discharges is one of the indicators officials point to that their actions are paying off. According to Persichilli, more than 6,300 patients with the coronavirus or under investigation for it have been discharged from hospitals in the last 10 days.

“While the numbers we report every day are grim, over 6,000 discharges is a reminder people are getting better and overcoming this illness,” said Persichilli.

“As we see the daily overall number of positive test results rise, we should also keep in mind there are hundreds, if not thousands, who have received positive tests results and have now defeated the virus,” Murphy added.

Murphy noted while 54,000 cases have been reported in April alone, about 17,000 were confirmed earlier and have gone through the believed two-week incubation period.