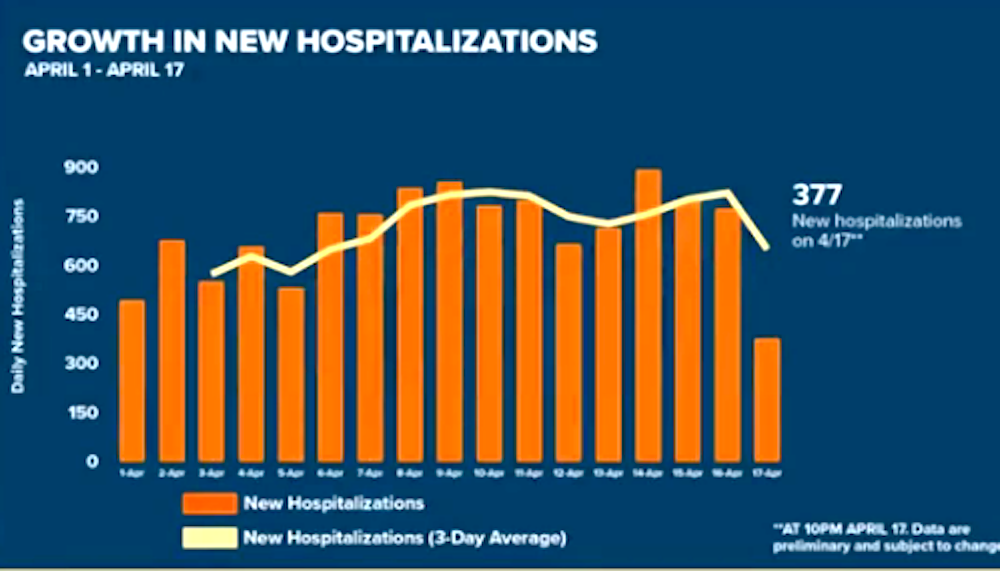 New Jersey officials used charts to show data they say proves their stay-at-home actions are the flattening curve of COVID-19 cases in the state.

Gov. Phil Murphy showcased charts that showed the state has seen a lower rate of new cases, deaths and hospitalizations.

In North Jersey, six counties are seeing the rate for cases to double exceeding 10 days. The hardest hit county, Bergen is at a rate of 19 days to double, followed by Sussex at 18, Morris at 17.5, Hudson and Essex counties both at 14, Warren at 13 and Passaic at 12.5.

“The progress is undeniable,” Murphy stated. “Please, God, let it stay that way.”

The governor credited residents with a strict adherence to the social isolation being undertaken, but implored that this has to continue until the data and the science shows that the state can start to reopen.

“The short connection between an abrupt change in human behavior and all those charts, data and progress is shocking,” Murphy insisted. “If we let our guard down right now, we would literally see it tomorrow….We are not out of the woods. We have not yet plateaued.”

Health Commissioner Judy Persichilli said New Jersey saw a 3% decrease in the daily hospitalization growth, a second straight day of decline, and 9,692 people with the virus or under investigation for it have been discharged from the hospital overall.

“We are now reporting more people leaving the hospital than entering,” the governor added.

Despite the optimism, officials said overall cases and deaths in the state continue to increase. As of April 18, the number of coronavirus cases in New Jersey climbed to 81,420 with 3,026 new cases and 231 new deaths, bringing that total to 4,070.

The racial breakdown of the record deaths was 50% white, 22% black, 17% hispanic, 5% Asian and 5% another race. State officials noted deaths in the black community were running about 50% more than their population in the state.

In regards to the underlying disease of those who have passed, 61% had cardiovascular disease, 39% diabetes, 30% chronic diseases, 21% chronic lung diseases, 15% neurological conditions, 11% cancer and 11% other. Persichilli has stated most cases have multiple underlying conditions which would push the percentage of 100%.

Bergen with More Than 12K Cases

There are another 748 cases and two deaths that are still under investigation to determine where the people reside.

The state has processed 147,850 coronavirus tests of symptomatic individuals since the outbreak began, with a 45% testing positive for COVID-19. The state estimates between 7,000-9,000 tests a day are taken.

Officials reported 7,718 patients are hospitalized with coronavirus and 814 discharged on April 17. There are currently 90 patients in field hospitals. Of those hospitalized, 2,204 are in intensive care units and 1,641 are on ventilators.

Murphy said the state cannot reopen until there is rapid scale testing and contact tracing so that those with COVID-19 to can quarantine in isolation.

Additionally, the first term Democratic governor sounded the alarm that financial decisions in Washington will have devastating effects to all levels of the state.

“There’s one part of Congress in particular, that doesn’t see the wisdom to send direct money into states,” stated Murphy.

The governor warned of massive layoffs among public workers on state, county and local levels due to the loss of tax revenue resulting from the lockdown in the state.

“We need both direct financial assistance to states from a bill passed by Congress and signed by the President, and we will need bonding flexibility,” Murphy said Saturday. “I would just plead with folks from both sides of the aisle to please get to that reality sooner than later, and make that happen.”