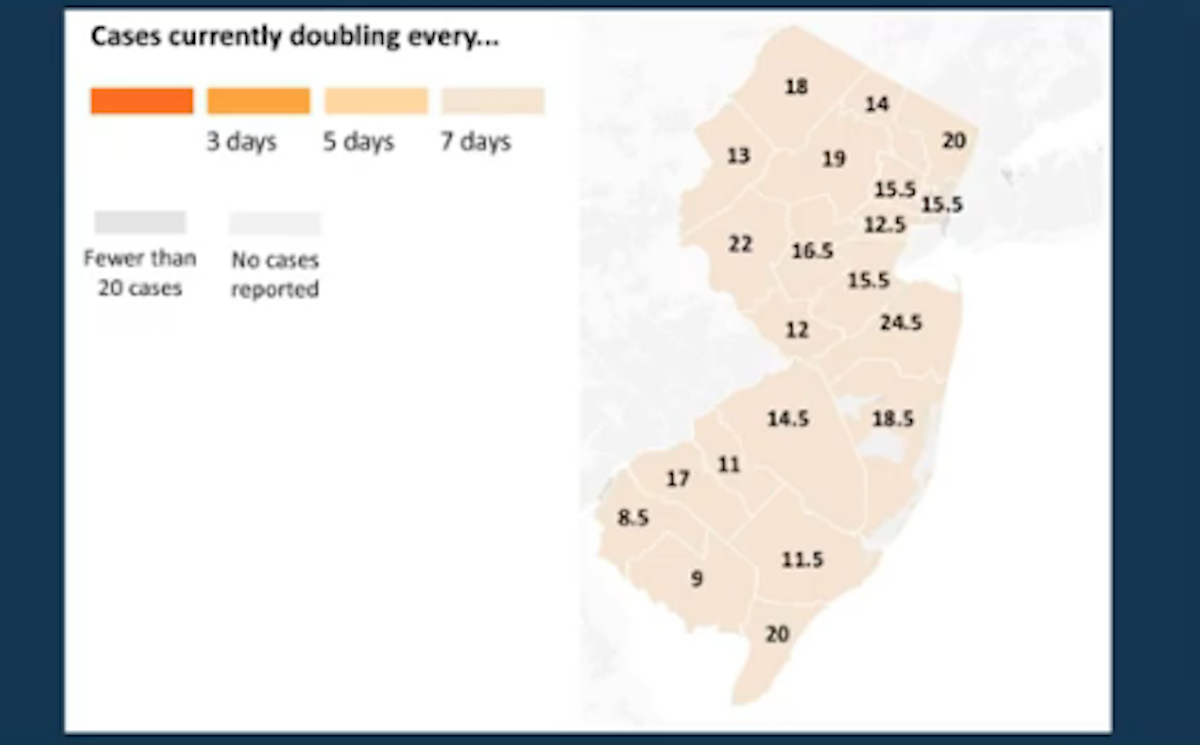 That is a mantra Gov. Phil Murphy used repeatedly at the daily coronavirus briefing April 20 when the subject about reopening the state was broached. And according to state officials, the trend of personal health is moving in the right direction.

“We are not claiming victory, but we are making progress,” the governor said. “It can’t be the other way around. It has to happen in that order.”

“We have achieved relative stability,” said Murphy as he trumpeted the numbers on hospitalizations declining. “The data helps inform our decisions as we look to a re-opening strategy.”

The first-term Democratic promised he will unveil “guidelines” and “principles” this week that the state will use when it comes time to reopen the state. But he stressed any decision would be data and science driven that puts the health of citizens first.

“This is a two-part scenario—securing the public health situation so you can have confidence as you get back as we reopen our economy,” stated Murphy. “Right now, that confidence does not exist.”

Murphy did state that any plan he enacts will less be date driven and more on the availability of testing in the state.

The governor stressed one guidepost that will be instrumental is the state’s ability to double the amount of testing it can offer—it currently performs 15,000 to 20,000 tests a day.

Another key element would be the turnaround of tests. Currently, it takes between five-to-seven days; Murphy wants results to come back within 24 hours to enable health officials to perform contact tracing and prevent spread in cases of positive COVID-19 tests.

Murphy said he has relayed these benchmarks in conversations with both President Donald Trump and Vice President Mike Pence. The Trump administration has said that testing is a state concern in which the states will have to obtain the test and the materials needed for the tests.

The governor pushed back on that approach, saying the federal government will be needed to develop the healthcare infrastructure that Murphy believes the country needs to have robust testing.

The current healthcare infrastructure on April 20 showed the number of coronavirus cases in New Jersey reaching 88,806 with 3,528 new cases and 177 new deaths, bringing that total to 4,377.

State officials said 57% of those dead are male and 43% female. The racial breakdown of the record deaths was 55% white, 22% black, 17% hispanic, 5% Asian and 5% another race. Murphy noted deaths in the black community were running about 50% more than their population in the state.

In regards to the underlying disease of those who have passed, 61% had cardiovascular disease, 39% diabetes, 30% chronic diseases, 21% chronic lung diseases, 15% neurological conditions, 11% cancer and 11% other. Health Commissioner Judy Persichilli has stated most cases have multiple underlying conditions which would push the percentage of 100%.

There are another 660 cases and one death under investigation to determine where the person resides.

The state has processed 161,714 coronavirus tests of symptomatic individuals since the outbreak began, with 45% testing positive for COVID-19. The state estimates between 7,000-9,000 tests are processed a day with test results returning in about a week.

Officials reported 6,986 patients are hospitalized with coronavirus and 583 discharged on April 19; a total of about 11,000 patients have been discharged since March 31. There are currently 74 patients in field hospitals. Of those hospitalized, 2,018 are in intensive care units and 1,594 are on ventilators.

Murphy said the number of newly hospitalized patients moving on a “downward trend….is one of our most-important positive indicators” for officials in determining if the procedures they have enacted are working. For April 20, hospitalizations were down 5% from the previous day.

Another positive indicator for the state was the amount of days it takes for a county to double its cases as all 21 counties in the state are now taking at least a week. The hardest hit county, Bergen is at a rate of 20 days to double, followed by Sussex at 18, Morris at 19, Hudson and Essex counties both at 15.5, Warren at 13 and Passaic at 14.

Murphy noted “just a few weeks ago, in some areas of the state cases were doubling in a matter of days.”