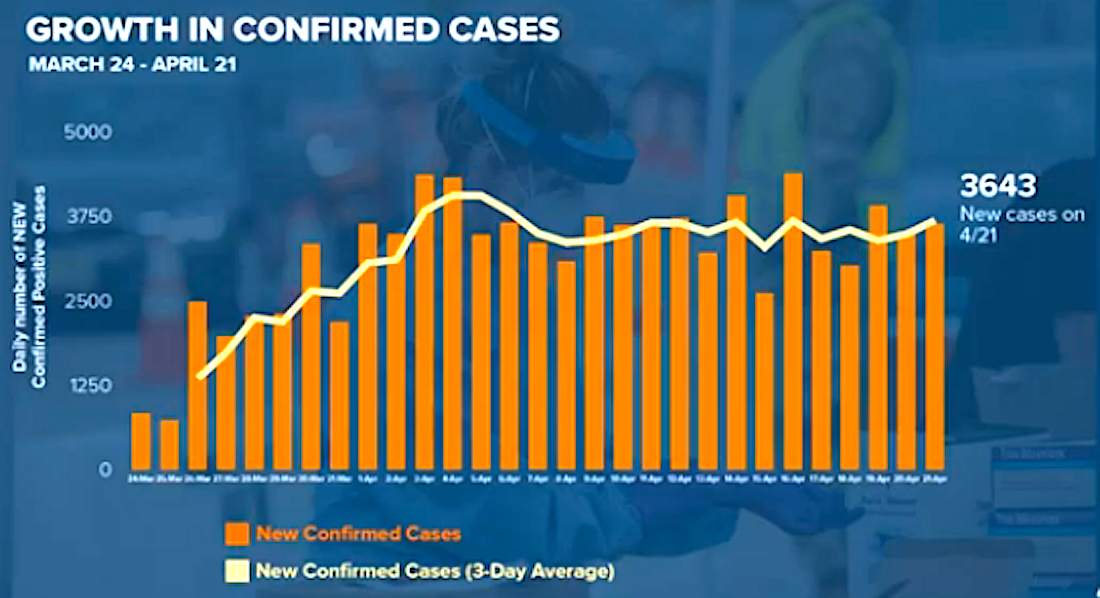 State officials say they are prepared for the surge in coronavirus cases that are beginning in the central part of New Jersey.

There were nine hospitals in the state that hit “divert” status April 20 and for the first time since the pandemic started, North Jersey hospitals did not lead the state. New Jersey Department of Health Commissioner Judith Persichilli said divert status was needed at five hospitals in central Jersey.

The state has a three region approach to deal with issues such as hospitalizations, staffing and equipment for those with COVID-19 infections.

Persichilli reiterated she expects the state to be dealing with “heavy hospitalizations” into mid-May.

Gov. Phil Murphy said because of these projections, restrictions on social distancing would need to remain in place for the next several weeks even as the rate of infection and hospitalizations flatten.

“We are not going to rush into reopening and risk undoing all the extraordinary work you have done so far,” Murphy said. “Our job collectively is to keep doing what we’re doing, limit the number of infections, hospitalizations, number of intensive care beds, the number of ventilators, and the number of fatalities.”

The first-term Democratic governor said his philosophy of letting data and science guide his administration will be used when it comes time to reopen schools.

“We are not going to open our schools back up until we are convinced by the science and medical professionals that doing so would be safe for students, for staff and for their families,” stated Murphy, adding issues such as face coverings and classroom configurations would have to be mapped out.

Murphy initially ordered all schools to close March 18 and recently extended the closure to at least May 15. He said receiving another month of data would allow for a more definite decisions if schools can be reopened this year.

As of April 21, the number of coronavirus cases in New Jersey reached 92,357 with 3,643 new cases and 379 new deaths—the highest single day total in the outbreak—bringing that total to 4,753.

In regards to the underlying disease of those who have passed, 61% had cardiovascular disease, 39% diabetes, 30% chronic diseases, 21% chronic lung diseases, 15% neurological conditions, 11% cancer and 11% other. Persichilli has stated most cases have multiple underlying conditions which would push the percentage of 100%.

There are another 599 cases under investigation to determine where the person resides.

The state noted 432 long-term care facilities are reporting at least one case of COVID-19 and the facilities have accounted for 2,048 of the total deaths in the state and 11,527 of the cases.

The state has processed 167,233 coronavirus tests of symptomatic individuals since the outbreak began, with 45% testing positive for COVID-19. The state estimates between 7,000-9,000 tests are processed a day with test results returning in about a week.

Officials reported 7,594 patients are hospitalized with coronavirus and 630 discharged on April 20. There are currently 72 patients in field hospitals. Of those hospitalized, 1,930 are in intensive care units and 1,501 are on ventilators.

Persichilli noted that the rate of patients on ventilators is currently 78%, down from a high of 97% a week ago.

“We really have seen a flattening out of our hospitalizations,” said Persichilli but commented intensive care units are tight in the central part of the state.

Health officials believe they will be better able to handle the surges in the central and south part of the state due to peaks expected to be lower and more bed capacity available throughout the state.

Persichilli said officials are prepared “to move patients in the southern part of the region” to increase bed availability as well as move in equipment and staffing from other regional tiers.