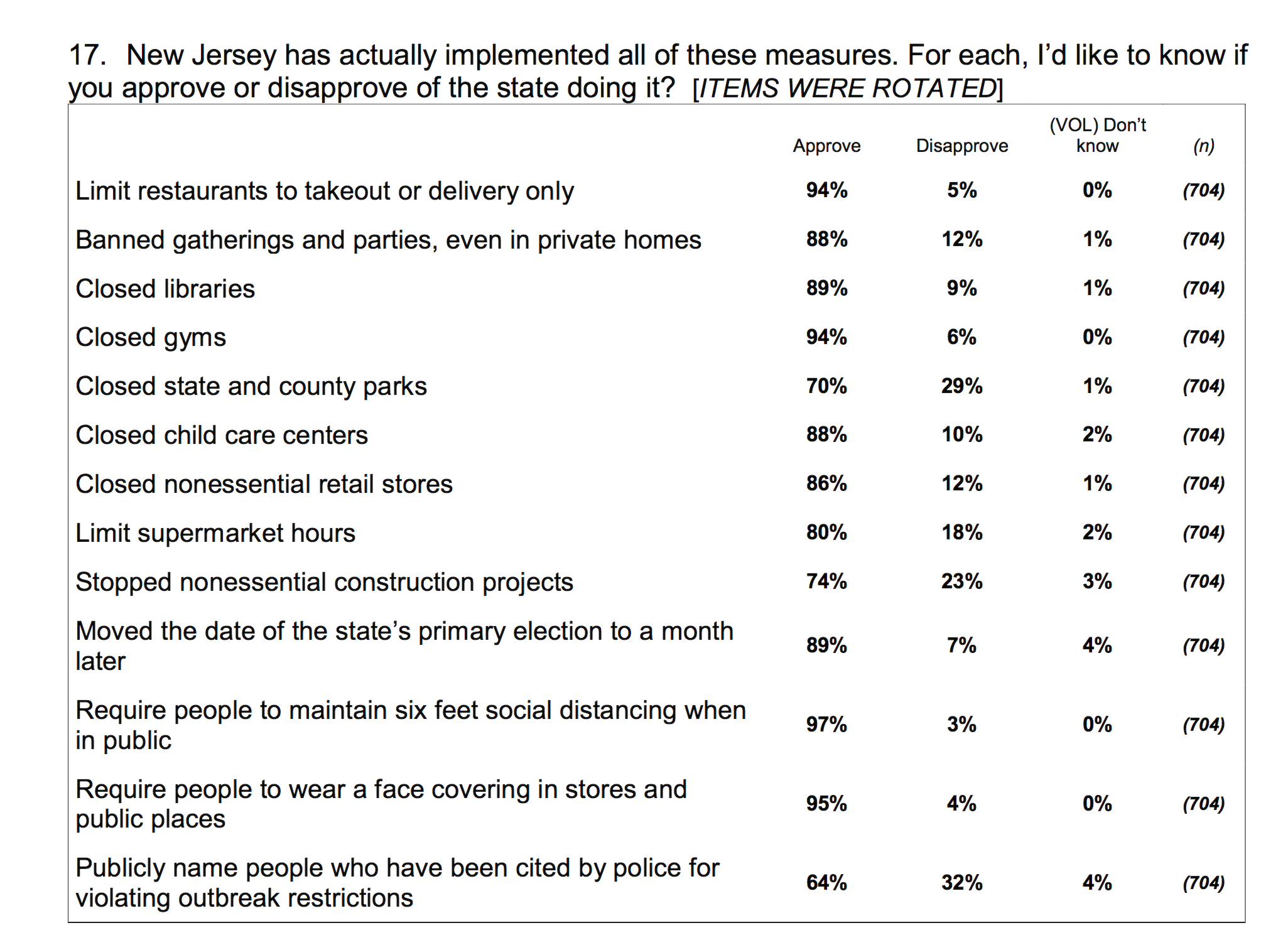 The actions taken by Gov. Phil Murphy and his staff to combat the coronavirus has earned widespread support from residents in New Jersey, according to the Monmouth University Poll released Apr. 21.

Just under two thirds of those surveyed (64%) say measures taken by New Jersey’s state government to slow the spread of the virus have been appropriate, compared with 23% say they have not gone far enough and 11% say they have gone too far.

In comparison, 51% of state residents say measures taken by the federal government have not gone far enough, while 42% say they have been appropriate. Another 5% say the federal measures have gone too far.

According to Patrick Murray, director of the independent Monmouth University Polling Institute, the numbers indicate any protests in New Jersey does not reflect the views of residents in the state.

“The vast majority are united in their support for social distancing measures to protect the health of their fellow New Jerseyans,” said Murray. “The poll shows, though, that these protestors represent an incredibly small sliver of all state residents.”

According to the poll, the public is very aware of the executive orders Murphy has signed since early March restricting certain activities in the state with 90% approval rates.

Among those policies include requiring people to maintain six feet of distance (97% approve/ 95% aware), wearing a face covering in public (95% approve/95% aware), banning all gatherings and parties (88% approve/85% aware); limiting restaurants to takeout and delivery only (94% approve/96% aware) and closure of gyms (94% approve/94% aware).

The Monmouth poll confirms Murphy’s statements that he fields the most questions about when are parks and schools going to reopen. Pollsters found shutting down state and county parks has probably sparked the biggest public pushback against the governor.

“The outcry is largely partisan, perhaps because it is the one area where GOP politicians feel they can criticize the governor without looking uncooperative,” noted Murray.

As for schools, the poll showed 87% agree with Murphy’s recent announcement that New Jersey schools will remain closed until at least May 15, but split on if the state should have done more.

Just over half, 51%, feel it is better to announce now  schools will be closed for the remainder of the school year while 46% agreed on the course to make the decision every four weeks or so.

Inside those numbers, 84% of state residents who have children under 18 years old approved of keeping the schools closed into next month, while 55% preferred the state announce now that schools are closed for the year. Forty two percent believe it is better to make closure decisions every few weeks.

The Monmouth University Poll was conducted by telephone from April 16 to 19, 2020 with 704 New Jersey adults.  The question results in this release have a margin of error of +/- 3.7 percentage points.