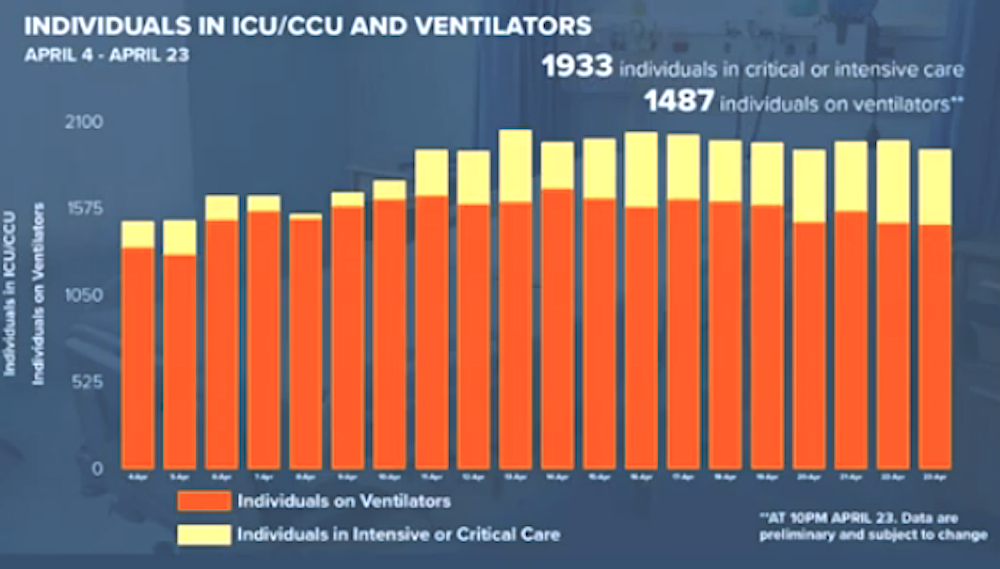 The warning came as State Health Commissioner Judy Persichilli reported April 24 daily hospitalizations were down 17% from its high on April 14, patients in intensive care units were down 6.6% from its April 13 high, and the 77% of patients on ventilators was down from 99% on April 10.

But both Persichilli and Gov. Phil Murphy stressed that while those trends show the curve is flattening, officials needed to see more progress and slowing of the coronavirus before a reopening can be considered.

Murphy stressed the indicators need to be on a significant decline before any actions to lessen the stay-at-home restrictions, particularly referencing several counties “slid backwards” with the number of days it takes for cases to double.

“We cannot let that happen,” the governor said. “Stay at home. Stay away from each other. We cannot ease one bit on our social distancing.”

The racial breakdown of the record deaths was 53% white, 20% black, 17% hispanic, 6% Asian and 5% another race. Murphy noted deaths in the black community were running about 50% more than their population in the state and recently signed legislation mandating hospitals report age, gender, ethnicity and race of people who have tested COVID-19 positive or died from the virus.

Another 1,108 cases and two deaths are under investigation to determine where the person resides.

The amount of days it takes for a county to double its cases in all 21 counties is taking at least a week. Bergen leads North Jersey countries with a rate of 27 days to double, Morris at 23, Essex at 22, Passaic at 17.5, Hudson and Sussex at 16.5 and Warren at 14.

The state noted 446 long-term care facilities are reporting at least one case of COVID-19 and the facilities have accounted for 14,579 of the cases and 1,652 of the total deaths confirmed with an additional 1,044 under investigation.

The state has processed 185,329 coronavirus tests of symptomatic individuals since the outbreak began, with 44% testing positive for COVID-19. The state estimates between 7,000-9,000 tests are processed a day with test results returning in about a week.

Officials reported 6,847 patients are hospitalized with coronavirus and 778 discharged on April 23. There are currently 98 patients in field hospitals, with 288 discharged overall. Of those hospitalized, 1,933 are in intensive care units and 1,487 are on ventilators.

After a couple of days of harsh words for Republicans in Washington, Murphy reported “good conversations” with key figures of the Trump administration.

Murphy in consecutive daily briefings had taken to task Senate Majority Leader Mitch McConnell’s for his suggestion states should file for bankruptcy instead of receiving more federal aid and U.S. Treasury guidance the governor said would have made The CARES Act funds allocated to the state “unusable.”

Murphy characterized a phone call with Treasury Secretary Steve Mnuchin as “productive.”  At issue is the Treasury Department restrictions prohibiting states from using the funds on the extra expenses they incur due to the coronavirus. New Jersey had plan to use the monies to offset the drop in tax collections that is hindering their ability to fund state operations and pay their employees.

“I discussed our need to get the money that’s rightfully ours from the CARES Act,” said Murphy. “Our conversation was a good step in the right direction, but we’re not over the goal line yet.”

Later in the day, the first-term democratic governor said he reiterated to Vice President Mike Pence the need for direct cash to all states hit hard by the coronavirus. He heralded a bipartisan bill sponsored by Sen. Bob Menendez as well the National Governors Association call for $500 billion as the type of relief states need.

“I will be persistent and stay at this because, if we don’t get direct cash assistance, we will have to make awful choices,” said Murphy.