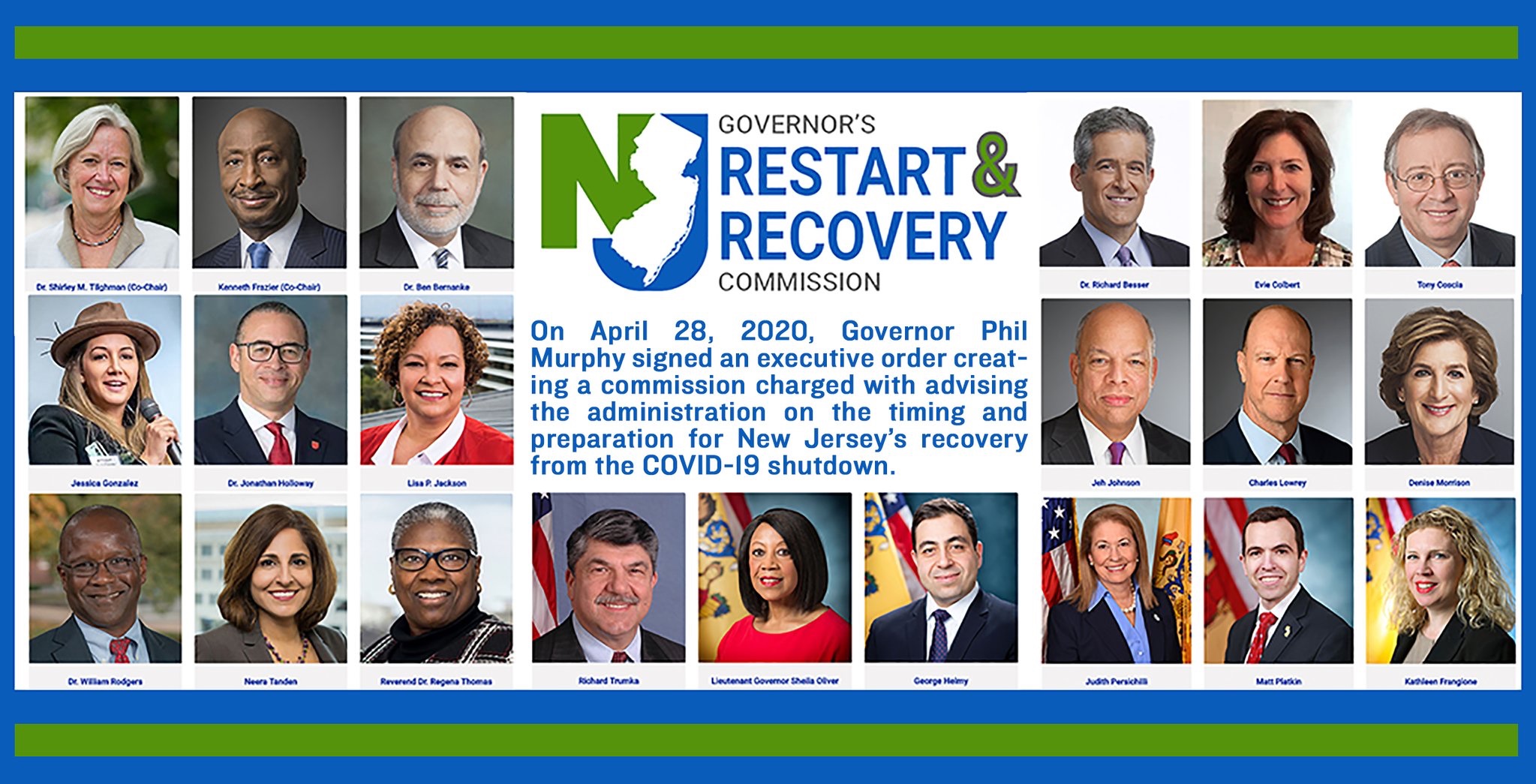 A day after rolling out his Road Back plan, Gov. Phil Murphy introduced the members of his Restart and Recovery Commission.

“With this task force we are bringing together some of the sharpest minds our state and nation have to offer,” said Murphy. “As I have said from the start, public health creates economic health and these individuals will help us decide when and how to restart the economy to best benefit both.”

The first-term Democratic governor said the commission will begin virtual meetings immediately, with their first task to advise Murphy on the timing of the restart that aligns with predetermined public health metrics put forth in the state’s Road Back plan.

Murphy said the 21 members of the commission bring a diverse wealth of experience in healthcare, business, finance, academics and economics.

Members of the committee besides Tilghman and Frazier are:

Besides being tasked by Murphy to address the immediate questions surrounding the safe restart of society, the commission will tackle both short-term and long-term economic issues—including public health, workforce issues and transportation—and develop strategies for how the state and federal government can support the economic recovery of the private sector and identify critical needs for federal support and intervention.

As of April 28, the number of coronavirus cases in New Jersey reached 113,856 with 2,887 new cases and 402 new deaths, bringing that total to 6,442. State officials acknowledge the numbers may skew a little lower coming off reporting inconsistencies due to the weekend.

Murphy has noted the rates in the black and Hispanic communities were running about 50% more than their population in the state and vowed that any plan will work to reduce racial inequities in healthcare. The governor recently signed legislation mandating hospitals report age, gender, ethnicity and race of people who have tested COVID-19 positive or died from the virus.

Another 718 cases under investigation to determine where the person resides.

The amount of days it takes for a county to double its cases in all 21 counties is taking at least a week. It has increased to more than 30 days in both Bergen and Morris counties, with Essex at 28 days, Hudson at 26, Sussex at 24.5, Warren at 21.5 and Passaic at 19.5.

The state noted 484 long-term care facilities are reporting at least one case of COVID-19 and the facilities have accounted for 17,201 of the cases and 2,051 of the total deaths confirmed with an additional 1,060 under investigation. Officials confirmed they are still reconciling the totals due to operators attempting to separate patient and staff records.

The state has processed 210,043 coronavirus tests of symptomatic individuals since the outbreak began, with 42% testing positive for COVID-19. Murphy noted that percentage has been “drifting down” for the past week. The state estimates between 9,000-11,000 tests are processed a day with results returning in about a week.

There are currently 63 patients in field hospitals, with 332 discharged overall. Of those hospitalized, 1,509 are in intensive care units and 1,262 are on ventilators. With 70% of patients on ventilators, Persichilli said that would be the lowest percentage for the month of April.

As cases continued in a southern trend, officials stated the top three counties for new cases included Middlesex and of the six hospitals on divert status, all but one was in the Central tier.

Additionally, the governor signed an executive order allowing municipalities to extend the grace period for property tax payments due on May 1 to June 1.

“Allowing municipalities the option of extending the grace period for May property tax payments is the right thing to do as many New Jerseyans are impacted financially as a result of this crisis,” said Murphy. “Leaders of towns and cities across the state have been trying to find ways to lessen the blow on local residents, and with this action, they are empowered to provide relief to homeowners as we continue to do everything possible to fight this pandemic.”

Under existing law, towns may only allow for a grace period of up to 10 days after the property tax deadline without interest or penalty. According to Murphy, the grace period extension will enable homeowners to pay their taxes a month after they are due without incurring any interest costs or penalties.