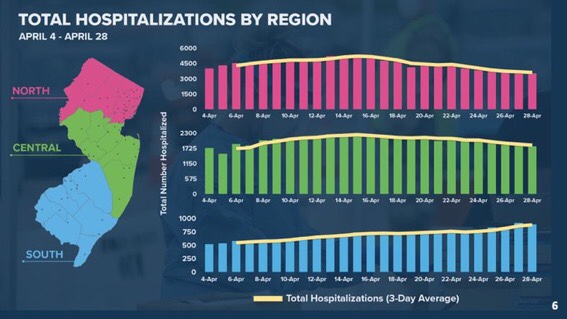 The order will take effect at sunrise on May 2 with social distancing continuing to be mandated. The park and course openings are the first major change to the stay-at-home orders implemented to slow the COVID-19 spread in the state.

The park and golf course closings were an issue Republicans had pushed back on since the announcement, was an area polls showed some disagreement with and comes a day after state Senate leadership, including Senate President Steve Sweeney, advocated the state reopen its parks and golf course.

In explaining the change, Murphy noted the decision was data driven—citing the drop in the number of hospitalizations for 15 consecutive days—and being swayed on an argument about the needs for it from a mental health perspective. Arguments made by politicians on both sides of the aisle and even friends did not factor into the reversal, he claimed.

“Your interventions to me did not matter one little bit,” Murphy said. “So with all due respect to all the pressure that’s been out there, we couldn’t frankly care. We make this call based on data, science, fact. Trust me I did not order these closures on a whim.”

Opening the parks and golf courses does come with restrictions. At golf courses, payment and reservations are to be made online; tee times are extended to 16 minute intervals for two players at a time, unless the foursome consists of immediate family or caretaker; one cart per person with exceptions made for family members or caretakers; frequent cleaning of common areas including restrooms, ranges and carts; pro shops and other amenities closed; removing bunker rakes and other furniture from the course; and no club rentals.

For state and county parks, parking lots will be limited to 50% capacity; playgrounds, restrooms, pavilions, and visitors centers will remain closed; and picnics and team sports are forbidden. Passive recreation will be allowed, including running, hiking, biking, fishing, boating, kayaking and horseback riding.

Counties and municipalities will decide whether their local parks will reopen or stay closed. Beach and boardwalk openings down the shore are dictated by local municipalities.

Murphy said the openings were in part a payment for the trust the overwhelming majority of New Jerseyans had put in the actions by state officials.

“We’re basically saying: We’re prepared to trust you,” he commented. “You’ve been trusting us…we’re returning some amount of that trust by saying, ‘We’re gonna open these ups, but you’ve got to behave in a certain way’.”

Behavior this weekend, especially adherence to social distancing and a “strong recommendation” by the governor for face coverings, will be monitored by State Park Police and local authorities and used as another data point for the state.

“I’m not trying to be a jerk about this, but if we see a congregation of people and they’re not social distancing, they’re not wearing face masks, we will reconsider,” stated Murphy. “We’re going to be looking very, very closely up and down the state this weekend.”

The governor paused for a moment of silence after noting New Jersey has lost more residents to COVID-19 than in World War I, the Korean War, the Vietnam War, both Gulf Wars, the wars in Afghanistan and Iraq, Superstorm Sandy, and 9-11 combined.

In regards to the underlying disease of those who have passed, 60% had cardiovascular disease, 42% diabetes, 31% chronic diseases, 16% chronic renal disease, 15% neurological conditions, 11% cancer and 13% other. Health Commissioner Judy Persichilli has stated most cases have multiple underlying conditions which would push the percentage of 100%.

Another 617 cases are still under investigation to determine where the person resides.

The amount of days it takes for a county to double its cases in all 21 counties continue to trend up, with cases in the now South doubling at a faster pace, according to Murphy. In New Jersey, it has taken more than 30 days to double in Bergen, Essex and Morris counties, 28.5 in Hudson, 28 in Sussex, 22 in Warren and 21 in Passaic.

Health officials noted 489 long-term care facilities are reporting at least one case of COVID-19 and accounted for 18,045 of the cases and 3,247 of the total deaths.

The state has processed 216,221 coronavirus tests of symptomatic individuals since the outbreak began, with 42% testing positive for COVID-19. Murphy noted that percentage has been “drifting down” for the past week. The state estimates between 9,000-11,000 tests are processed a day with results returning in about a week.

Officials reported 6,281 patients are hospitalized with coronavirus, while 474 patients were discharged on April 28. State officials noted discharge numbers going forward will not include those who have died. Murphy displayed a new chart showing hospitalizations decreasing in the North, remaining steady in the Central tier and slightly rising in the South.

There are currently 59 patients in field hospitals, with 342 treated overall. Of those hospitalized, 1,811 are in intensive care units and 1,327 are on ventilators.

Additionally, an executive order was signed allowing county and municipal clerks to accept initiative and referendum petitions electronically as well as allowing signatures for these petitions to be collected electronically.

“Now is not the time for anyone to be going door-to-door to campaign or collect signatures for any purpose,” said Gov. Murphy.

A template of the online form for electronic signature is to be created by the state for use by May 1. Clerks will require signatures for initiative and referendum petitions to be gathered electronically from that date forward, with hand signatures obtained prior to the effective date accepted.