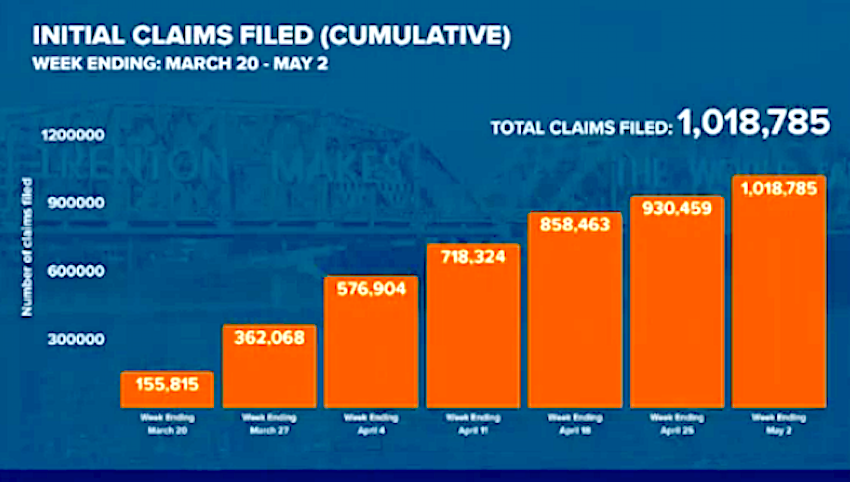 With unemployment claims in New Jersey passing one million May 7, state officials spoke about how they are working to get all claims processed in a timely fashion.

Gov. Phil Murphy said to those unemployed that have had issues getting their claims processed, “We’ve heard you loud and clear. We know you’re frustrated.”

“This is an unemployment crisis unlike that which we have ever seen,” stated Murphy. “Weekly claims are, literally, many times more than the New Jersey Department of Labor has historically dealt with across entire months.”

State Labor Commissioner Robert Asaro-Angelo said the state is averaging 155,000 new claims a week and unemployment office workers are trying to help residents submit qualified claims as quickly as possible for those who have lost their jobs due to the COVID-19 crisis.

The department has already processed claims for 700,000 unemployed, underemployed and furloughed residents, totaling $1.9 billion in federal and state assistance to date, officials said. The state said the current backlog of about 300,000 claims mostly deals with the new Pandemic Unemployment Assistance program that made gig workers and freelancers eligible.

To help handle the surge, the state is launching a new chatbot and is working on getting a new call center for claims up and running which would add 130 more employees to process the claims.

Officials noted six days is the median time it takes for a claim to get processed, with 97% paid within three weeks.

Asaro-Angelo characterized unemployed residents waiting longer to receive benefits are anomalies that now run into the thousands due to the higher volume. The commissioner said issues with claims often deal with wages from multiple states or claims being contested by their employers.

“In the end, those claims would be having the same issues if they happened five months ago. There’s all kinds of emergent situations. All you want to do is cure them right away,” said Asaro-Angelo

When asked about Assemblyman Kevin Rooney’s call for Asaro-Angelo to resign, Murphy did not blink in proclaiming his support for the labor commissioner.

“Rob’s not going anywhere,” the governor said. “This is a 500-year flood. New Jersey’s performance is in a different place than most American states right now.”

The state has processed 261,869 coronavirus tests of mostly symptomatic individuals since the outbreak began, with 39% testing positive for COVID-19. Murphy noted that the percentage was the lowest since the state began tracking. The state estimates between 9,000-11,000 tests are processed a day with results returning in about a week.

Officials reported 4,996 patients are hospitalized with coronavirus—which included 325 new hospitalizations—while 460 patients were discharged. The north tier had 2,562 patients hospitalized, the central 1,558 and the south 876.

There are currently 32 patients in field hospitals, with 413 treated overall. Of those hospitalized, 1,470 are in intensive care units and 1,107 on ventilators.

Another 594 cases are still under investigation to determine where the person resides.

In regards to the underlying disease of those who have passed, 59% had cardiovascular disease, 43% diabetes, 32% other chronic diseases, 17% neurological conditions, 15% chronic renal disease, 10% cancer and 14% other. Health Commissioner Judith Persichilli has stated most cases have multiple underlying conditions which would push the percentage of 100%.

Health officials noted 513 long-term care facilities are reporting at least one case of COVID-19 and accounted for 24,639 of the cases and 4,505 of the total deaths.

The governor announced the National Guard will be deployed to long-term care facilities beginning this coming weekend.

“We don’t take this step lightly,” he said. “But we take it knowing that the crisis in our long-term care facilities requires us to take it.”

The soldiers will work to support the facilities as non-medical workers, which could include testing, janitorial services, cooking and serving meals and performing administrative or logistical tasks.

The first deployment includes 22 soldiers being sent to Andover Subacute and Rehabilitation Center, said Persichilli. The Andover facility was being evaluated by Guard personnel to determine where the need is most.