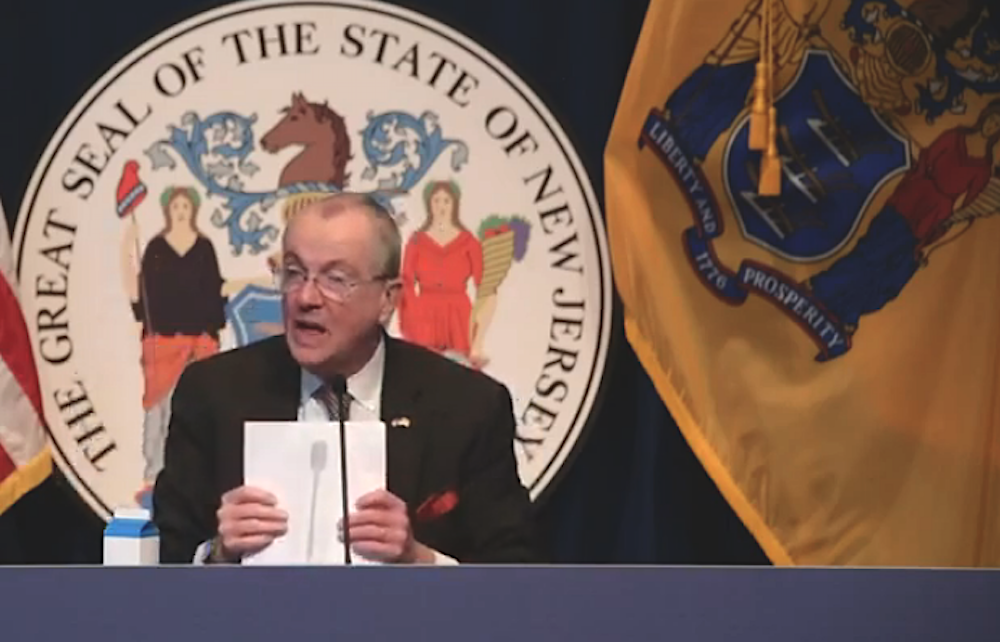 Gov. Phil Murphy, with Sen. Bob Menendez sitting at his side, came out attacking GOP politicians looking to curtail aid to New Jersey.

“These are leaders from states that are all too happy to spend the tax dollars of New Jerseyans on pork projects back home, but seemingly have no interest in helping states like New Jersey at this moment to avert a national economic catastrophe,” Murphy said at his daily briefing May 11.

The first-term governor did not veil his ire with Senate Majority Leader Sen Mitch McConnell (R-KY).

“Kentucky gets back $2.41 for every dollar it gets from taxpayers—including ours,” he said. “Sen. McConnell, good luck tapping New Jersey for your next project in Kentucky if New Jersey has nothing to give because you refused to help us restart and recover.”

The governor said the strain on budgets is not just a New Jersey problem and will mean mass layoffs of public workers, including police, firefighters, EMS and healthcare workers, who are currently on the frontlines of the COVID-19 crisis .

“I promise you, these discussions are happening in red states and blue states across the nation,” Murphy said. “No one has asked for a bailout. What we are asking for is the ability to prevent the public health emergency we are trying desperately to climb out from into a second Great Depression.”

Despite Murphy’s concerns of aid being held up due to politics in Washington, Menendez said support was growing for his bipartisan $500 billion proposal to deliver federal resources to states and communities on the frontline of the coronavirus pandemic.

Co-sponsored with Bill Cassidy (R-La),  The State and Municipal Aid for Recovery and Transition (SMART) Fund will expand upon the existing $150 billion set aside in the Coronavirus Aid, Relief, and Economic Security (CARES) Act to help both local governments and states.

The funding would ensure eligible entities receive money to plug revenue losses due to the outbreak. It would target additional funding towards hotzones that are combating the pandemic head-on. Locally, mayors and county officials up and down New Jersey have expressed support for the legislation as well as the New Jersey State Police Benevolent Association.

“The SMART Fund ensures New Jersey gets its fair share of federal funding,” declared Menendez.  “These flexible, federal dollars can help our state dramatically expand its testing capacity and continue to treat COVID-19 patients. It will help stave off massive layoffs and deep, painful cuts to the essential services that make our state the great place to live, work, visit and shop.”

New Jersey’s senior senator said he expects to have at least two GOP cosponsors—one he termed “surprising”—representing a cross-section of the country by the end of the week as the issues continue to resonate across the U.S.

“My experience is once you begin to create a movement, others feel comfortable in joining, the numbers grow,” said Menendez, who disclosed Rep. Mikie Sherrill will lead the bipartisan effort to pass the SMART Fund in the House of Representatives.

The senator noted Sens. Mitt Romney (R-UT), Susan Collins (R-ME) and John Kennedy (R-LA) have all spoken recently of the need for more funding on the Senate floor.

“That is a totally different tune then what the majority leader has expressed,” said Menendez. “When that many members of his own caucasus speak up, that makes a big difference.”

Additionally, the Senator had harsh words from the country of origin on the virus.

“China has failed miserably,” stated Menendez. “The problem for me is that they were not forthcoming when the pandemic started.”

As of May 11, the cumulative number of coronavirus cases in New Jersey reached 139,945 with 1,453 new cases and 59 new deaths, bringing that total to 9,310. The governor, while hopeful, noted historically there has been a lag with data on Monday’s since the state began tracking data arising from the pandemic.

The daily rate of infections from those tested as of May 7 has been in steady decline and currently rests at 26%.

Officials reported 4,195 patients are hospitalized with coronavirus—which included 179 new hospitalizations—while 227 patients were discharged. The north tier had 2,123 patients hospitalized, the central 1,331 and the south 741, all down from the day before.

Of those hospitalized, 1,255 are in intensive care units and 970 on ventilators, the second day in a row the total was below 1,000. There are currently 28 patients in field hospitals, with 426 treated overall.

Another 729 cases are still under investigation to determine where the person resides.

Health officials noted 515 long-term care facilities are reporting at least one case of COVID-19 and accounted for 26,397 of the cases and 4,890 of the total deaths.