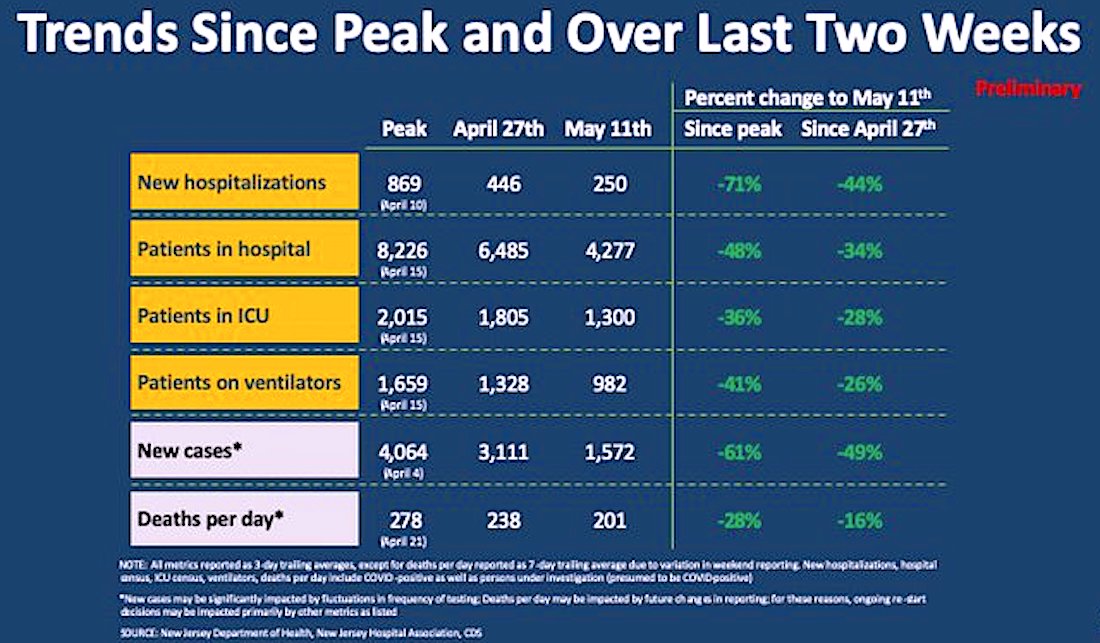 With the state rolling out its next steps to reopening the state, Gov. Phil Murphy was quick to remind residents there is still a lot of work to be done to defeat the coronavirus.

The governor rolled out how expanded COVID-19 testing would be implemented in the state in tandem with the contact tracing on May 12 with the warning that the state is not “out of the woods yet.”

“No state is currently as impacted as ours,” said Murphy.

To illustrate the point, Murphy focused on a chart showing New Jersey being the hardest hit per capita compared to other states in three significant data categories.

Even with those grim statistics, Murphy reported “undeniable progress” in key data points on hospitalizations, ICU patients and ventilators.

For the most severe cases, which reached its peak April 15, patients in the intensive care unit declined 36% since reaching the peak and patients on ventilators 41%. Since April 27, those numbers have dropped 28% and 26%, respectively.

Murphy credited residents with adhering to the stay-at-home order as well as following social distancing guidelines resulting in declining numbers.

“You have moved the trend lines in the right direction,” Murphy said. “This does not happen without the extraordinary efforts of everyone in this state”

As of May 12, the cumulative number of coronavirus cases in New Jersey reached 140,743 with 898 new cases and 198 new deaths, bringing that total to 9,508. The governor noted the number of new cases was the first time the count was under a thousand since March 25.

The daily rate of infections from those tested as of May 10 has been in steady decline and currently rests at 23%.

Officials reported 4,328 patients are hospitalized with coronavirus—which included 360 new hospitalizations—while 164 patients were discharged. The north tier had 2,197 patients hospitalized, the central 1,329 and the south 802.

Of those hospitalized,1,306 are in intensive care units and 982 on ventilators, the third day in a row the total was below 1,000. There are currently 34 patients in field hospitals, with 435 treated overall.

Another 704 cases are still under investigation to determine where the person resides.

Health officials noted 518 long-term care facilities are reporting at least one case of COVID-19 and accounted for 26,476 of the cases and 4,953 of the total deaths.