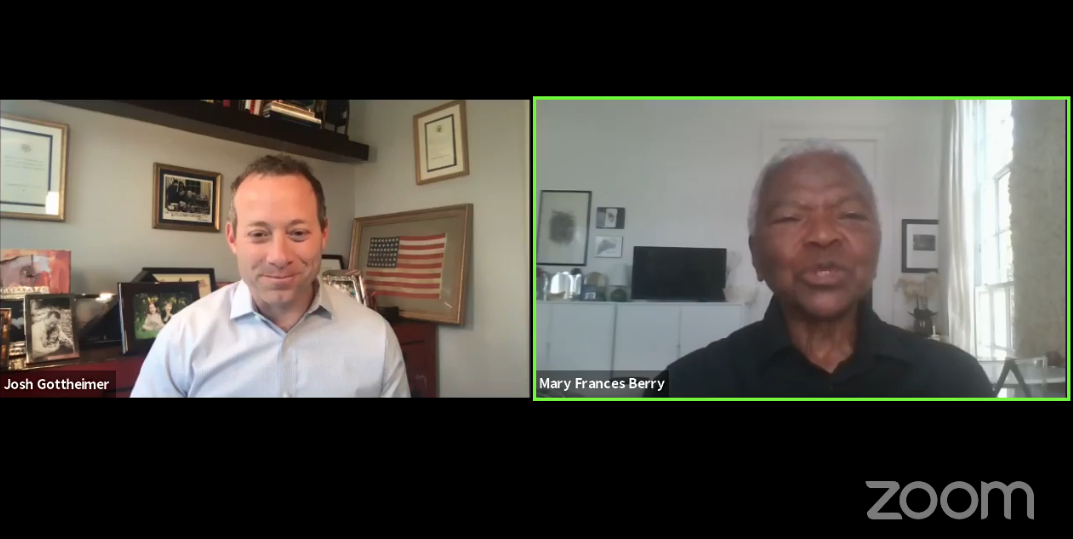 Civil rights leader Dr. Mary Frances Berry believes now is the time for Congress to enact police reforms that have been kicking around in Washington for years.

In a Facebook live discussion with Rep. Josh Gottheimer June 5, Berry said protestors want to make sure their anger over the death of George Floyd leads to change.

“I believe that Congress should pass a law before the election of what is acceptable for police keeping suspects from getting away from them,” said Berry, specifically citing the barring of choke holds and a national registry for police officers in regards to complaints filed against them.

But the issues go deeper, according to Berry, and these underlying causes need to be addressed as well.

“All types of reports have repeatedly said that if you want to stop crime and issues like this with the police, work on issues like housing, community support, mental health,” said Berry, who chaired the U.S. Civil Rights Commission during four presidential administrations.

“There ought to be some new legislation or modifications of ones that passed to deal with these underlying issues,” said Berry.

Gottheimer said in a recent discussion with the House of Representatives’ Black Caucus, the subject of professional relationships in law enforcement was one that was focused on.

“Too much coziness between prosecutors and law enforcement, that has always been an issue,” said Gottheimer. “Another issue is making sure if an officer has had infractions in the past, make sure that they are not hired by the next department.”

One thing Berry stressed that needs to be done at the local level is redefining the role of law enforcement as public safety officials, not to order residents around.

Berry noted in her experiences with protestors are they a diverse group who are looking in the mirror to see the problems, “they say it is a white peoples problem, not just a black peoples problem.”.

“Youngsters tell me it is a ‘Karen’ problem,” said Berry. “ “When you see the ‘Karens’ who call the police when someone is bird watching…these people are part of the problem. They say ‘We need to make clear that we do not agree with this type of behavior’ as all it does is to irritate everybody.”

Gottheimer said it has been a very painful time in the last few months, and that “Mr. Floyd’s murder has brough to the surface some much inequity….and a disproportionate affect on the minority community.”

Berry noted social media and the death coming during the coronavirus pandemic when 40 million people are unemployed and fatigue from stay at home orders has led to greater attention, contrasting it to the national reaction when Eric Garnier died in police custody.

“It’s the cumulation of these events…I pray to God we do not have another one,” said Berry.

Ultimately, Berry believes that changes must come from within police departments.

“This episode makes it harder for cops,” said Berry. “They need to be the first ones harder on their fellow officers.”

Berry said politicians need to make the case of what they are voting for, especially to younger people.

“If nothing happens, I believe the protests will continue,” said Berry.

The night for the conversation with Dr. Berry, Gottheimer spoke at a demonstration of unity with the Warren-Sussex County NAACP, Washington Township Police Department, Washington Borough leadership, and North Jersey residents on June 4.

“We are continuing to see how Americans are being wrongfully killed because of the color of their skin. This is a fight to end the discrimination, inequality, and deadly racism that has had a grip on our country for far, far too long,” said Gottheimer.

“But what we’re seeing right now in our country is that we are constructively confronting the very ugly truth that the color of our skin predetermines much about our lives, and we are choosing to talk about how to address that reality, and we are fighting to do better.”