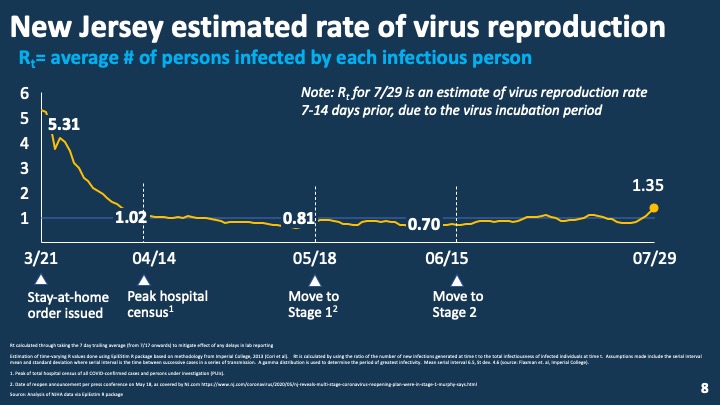 Despite no COVID-19 related deaths for the first time since March 10, Gov. Phil Murphy appears set to announce tighter restrictions as soon as Aug. 3.

Murphy detailed that if key predictive health metrics continued to rise at the rate over the first weekend in August as they did in the last week of July, stricter restrictions would be put back in place.

“We are not past COVID-19,” declared Murphy at a press briefing July 31. “These numbers are setting off alarms. The only way to silence these alarms is by taking this seriously.”

“We are standing in a very dangerous place,” he stated.

Officials have continually cited transmission rate—which measures the rate each new case leads to how many additional cases—and positivity rate as health data they rely on to track how the coronavirus is being contained in New Jersey, guiding them in determining when restrictions have to be tightened or could be lifted.

Additionally, Murphy said the amount of new infection cases is “meaningfully” higher than a month ago. The daily average for infections for the last week of June was about 350 a day; in the last week that has risen to 550 a day.

“The increases in new cases, given the recent data, we anticipate it will go higher in the days ahead,” predicted Murphy.

The first-term Democratic governor did not shy away from pointing a finger at who is to blame for the increases.

“Everyone who walks around refusing to wear a mask or hosts an indoor house party or who overstuffs a boat is directly contributing to the increase,” he said. “It has to stop and it has to stop now.”

“The problem has been with behavior of residents from in-state,” Murphy stated.

The current threshold for indoor gathering is 25% of capacity or 100 people, whichever is lower.  While not making any announcements, Murphy hinted this was the final warning before action takes place.

“Consider this as being put on notice…We will not tolerate these devil-may-care, nonchalant attitudes any more,” said the governor.

When asked what is the red line on health data that would move him to enact stricter policies, Murphy replied “We are there. You won’t have to wait much longer assuming the trends keep going where they have been going, we are in that neighborhood.”

The daily rate of infections from those tested as of July 27 was 2.2%. The state is no longer using serology tests as health officials explained those results show a past presence of the disease as well as a current one. By region, the north tested at 1.8%, the central at 2.0% and the south 3.0%.

Officials reported 695 patients are hospitalized, with 352 confirmed cases and 343 patients under investigation for having coronavirus. The north tier had 316 patients hospitalized, the central 195 and the south 184.

Of those hospitalized, 113 are in intensive care units and 45 on ventilators, while 52 patients were discharged.

Another 648 cases are still under investigation to determine where the person resides.

State officials are tracking cases of Multisystem Inflammatory Syndrome in children who in turn  test positive for COVID-19. No new cases were reported July 29, with the total remaining at 54 cumulative cases for children ranging in age from 1-18. All have tested positive for COVID-19 or have antibodies in their blood. No patient is currently hospitalized. No deaths have been reported from the disease.

Persichilli stated “Black and Hispanic children account for a disproportionately high number” on a national scale. While only a small sample, Health Commissioner Judith Persichilli reported the racial breakdown in New Jersey was 40% Hispanic, 34% Black, 12% White, 6% Asian and 4% other.

Health officials noted currently 300 long-term care facilities are reporting at least one case of COVID-19, accounting for a total of 21,161 of the cases, broken down between 13,782 residents and 7,379 staff.

The state’s official death total will now be reported as those that are lab confirmed, sits at 6,916 on July 31. The facilities are reporting to the state 6,704 residents deaths and 120 staff deaths.