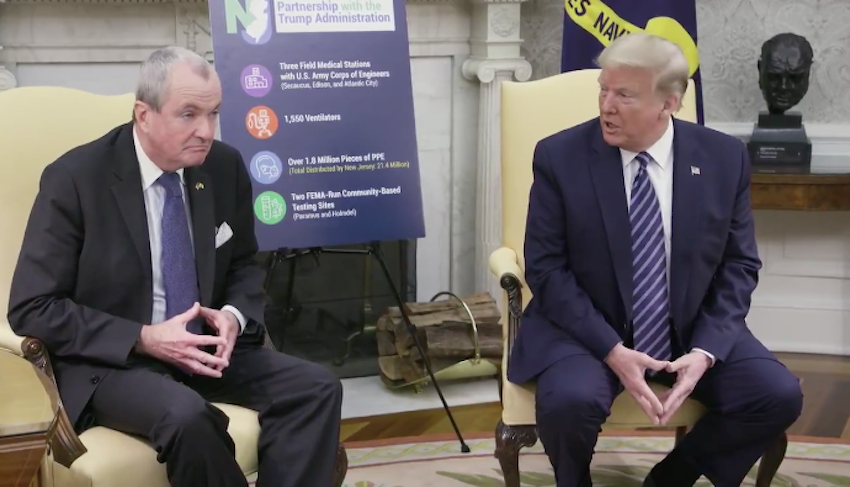 Gov. Phil Murphy characterized the executive orders President Donald Trump signed for unemployment benefits and a tax holiday as doing little to help the economy and the immediate needs of those out of a job.

“A payroll tax holiday means nothing to the unemployed when there’s not a paycheck coming in— a fact made worse since the $600 enhanced weekly unemployment benefit expired at the end of July,” stated Murphy at a press briefing Aug. 10.

The President has proposed a $400 a week unemployment benefit that would require states to match a quarter of. Murphy said besides all states being strapped for cash currently—the program would cost New Jersey about $70 million a week—the Trump Administration offered no clear guidance as to how states will pay for or run.

No Help to Unemployed

“Millions of unemployed workers—and their families—deserve better,” said Murphy. “Let’s be clear about something: States are going broke and millions of Americans are unemployed. Yet the President’s solution called for states to create a new program we cannot afford and don’t know how to administer because of this uncertainty.”

The first-term Democratic governor opined experts have spoken against the plan due to it having little or if any stimulus effects on our national economy.

“I can not sit here right now and say New Jersey can afford to participate in this program,” he said.

On a payroll tax holiday, Murphy argued it would not save workers anything in the long run, as they would still have to pay taxes come next April 15 while hurting funding for social service programs that are in use now.

“A payroll-tax holiday diverts billions of dollars we need for Social Security and Medicare,” said Murphy. “The former is the lifeline for millions of American seniors. And the latter is the sole means of healthcare for many who are wary of becoming COVID-19’s next victims.”

The governor backed the House of Representatives already sent to the Senate as a “workable plan” to extend direct benefits to the unemployed as well as billions of dollars to state and local governments to make sure their coronavirus response can continue.

He stated fellow Democrats Senate Minority Leader Chuck Schumer and Speaker of the House Nancy Pelosi have more than shown a willingness to deal,  to hammer out a deal that delivers a true stimulus and response bill to the President’s desk. He again laid blame for a lack of a deal with Senate Majority Leader Mitch McConnell.

“Sen. McConnell needs to stop trying to play to a partisan audience as well and please just get this done,” argued Murphy. “Millions of Americans, New Jerseyeans among them, need McConnell to step it up and step it up now—there can be no more excuses.”

The governor said New Jersey has proved things can be accomplished when leaders react to the COVID-19 crisis not according to politics, but according to science and the direct needs of the people.

“Let’s see some of this selflessness in Washington, for once,” he said.

Health Commissioner Judith Persichilli noted six deaths occurred in the last 24 hours of reporting that have not yet been lab confirmed.

The daily rate of infections from those tested as of Aug. 6 was 1.6%. The state is no longer using serology tests as health officials explained those results show a past presence of the disease as well as a current one. By region, the north tested at 1.4%, the central at 1.4% and the south 2.4%.

As for the rate of transmission, it continued to decline, registering at 0.98. Officials have continually cited transmission rate and positivity rate as health data they rely on to track how the coronavirus is being contained in New Jersey, guiding them in determining when restrictions have to be tightened or lifted.

Officials reported 545 patients are hospitalized, with 265 confirmed cases and 261 patients under investigation for having coronavirus. The north tier had 218 patients hospitalized, the central 150 and the south 177.

Of those hospitalized, 83 are in intensive care units and 29 on ventilators, while 35 patients were discharged.

Another 646 cases are still under investigation to determine where the person resides.

State officials are tracking cases of Multisystem Inflammatory Syndrome in children who in turn  test positive for COVID-19. No new cases were reported Aug. 10, with the total remaining at 55 cumulative cases for children ranging in age from 1-18. All have tested positive for COVID-19 or have antibodies in their blood. Two are currently hospitalized. No deaths have been reported from the disease.

Health officials noted currently 261 long-term care facilities are reporting at least one case of COVID-19, accounting for a total of 17,517 of the cases, broken down between 11,273 residents and 6,244 staff.

The state’s official death total will now be reported as those that are lab confirmed, sits at 6,966 on Aug. 10. The facilities are reporting to the state 6,678 residents deaths and 120 staff deaths.