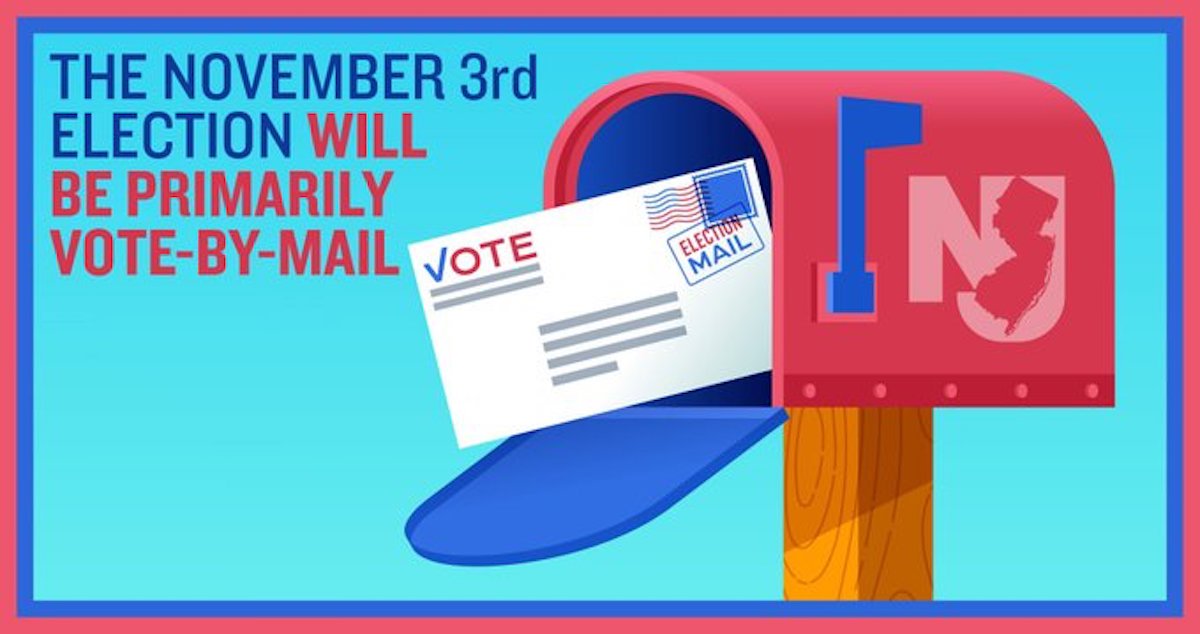 Even as efforts are being made by President Donald Trump to make it harder to do so, New Jersey will go forward with its plan to offer a vote-by-mail option to all eligible voters in November.

The Nov. 3 election will be a hybrid-model, with New Jersey officials expanding vote-by-mail to all active registered New Jersey voters who will automatically receive a prepaid return-postage vote-by-mail ballot. County Clerks are to mail the ballots out by Oct. 5.

The state is tweaking the process from the May and July elections, by allowing voters to return ballots by mail, depositing it in a secure drop box, handing it directly to a poll worker at a polling place on Election Day and allowing for in-person voting. Any voter who chooses to cast their vote in-person will do so on a provisional ballot, while individuals with disabilities will have access to an ADA-conforming voting machine.

Gov. Phil Murphy said the state will double each county’s drop boxes to 10 boxes from the five in the primary July 7.

Additionally, a new online voter registration system will be up and running Sept. 4, giving new voters an avenue to check if they are registered. No early voting will be held in the state nor will ballots be counted before Election Day.

“No one should have to choose between their right to vote and their health,” said Murphy at a press briefing Aug. 14.

Murphy and Secretary of State Tahesha Way both declared the two previous vote-by elections success, noting the July 7 primary was the second second-highest state turnout in history—1.8 million in 2008 vs. 1.5 million in 2020.

“Making it easier to vote doesn’t favor any one political party, but it does favor democracy,” said Murphy. “Our plan is built around a simple principle: Making sure voting is safe for you and secure for democracy.”

For those using the United States Postal Service (USPS) to vote, all ballots being returned must carry a postmark by Nov. 3 and received by the respective county clerk’s by 8 p.m. Nov. 10. Due to a court ruling in New York, ballots which lack postmarks due to postal error received by 8:00 p.m. on Nov. 5 will be considered valid.

In regards to the ongoing dispute about funding the USPS, Murphy said politics should be taken out of the equation.

“The USPS and its necessary funding, is being turned into a political football by those who simply don’t believe in expanding ballot access,” said the first term Democratic governor. “We will not let these political issues disenfranchise voters or suppress anyone’s ability or right to vote.”

Vote-by-mail has not been without its issues in the Garden State. The state before the July 7 primary settled a lawsuit in regards to the rejection of ballots due to signature issues, as over 9% of mailed in ballots in May’s special elections were disqualified. The agreement, reached with the League of Women Voters of New Jersey and the NAACP New Jersey State Conference, mandates election officials notify voters whose ballots are slated to be rejected due to signature issues within 24 hours.

The issues gaining national recognition due to President Trump using it as talking point in his argument against vote-by-mail was voter fraud charges stemming from the May 12 Paterson municipal election. Paterson Councilman Michael Jackson, Councilman-elect Alex Mendez and the brother of Councilman Shahin Khalique were among those charged by state Attorney General Gurbir Grewal on June 25 on voter fraud charges.

The indictments stem from a state investigation into the city’s six ward-based city council seats, an investigation that remains open, as candidates in some ward races accused each other’s campaigns of stealing voters’ blank ballots and fraudulently filling them out.

Murphy saw the indictments as a positive, showing that the state was on top of possible fraud issues and is willing to prosecute those who committed the fraud.

“Unlike some other states, we will not look for ways to restrict the rights of voters to have their voices heard or to otherwise block access to the ballot,” said Murphy. “We are doing everything we can to ensure that every voter is heard.”

“I’m confident that, on Nov. 3, New Jersey will show our nation that our democracy is stronger than ever.”

State officials noted four deaths occurred in the last 24 hours of reporting that have not yet been lab confirmed.

The daily rate of infections from those tested as of Aug. 10 was 1.6%. The state is no longer using serology tests as health officials explained those results show a past presence of the disease as well as a current one. By region, the north tested at 1.9%, the central at 1.8% and the south 2.6%.

As for the rate of transmission, it remained unchanged for the third day in a row at 0.92. Officials have continually cited transmission rate and positivity rate as health data they rely on to track how the coronavirus is being contained in New Jersey, guiding them in determining when restrictions have to be tightened or lifted.

Officials reported 514 patients are hospitalized, with 278 confirmed cases and 236 patients under investigation for having the coronavirus. The north tier had 246 patients hospitalized, the central 119 and the south 149.

Of those hospitalized, 91 are in intensive care units and 40 on ventilators, while 47 patients were discharged.

Another 1,001 cases are still under investigation to determine where the person resides.

Health officials noted currently 225 long-term care facilities are reporting at least one case of COVID-19, accounting for a total of 15,562 of the cases, broken down between 9933 residents and 5,629 staff.

The state’s official death total will now be reported as those that are lab confirmed, sits at 7,011 on Aug. 14. The facilities are reporting to the state 6,690 residents deaths and 121 staff deaths.