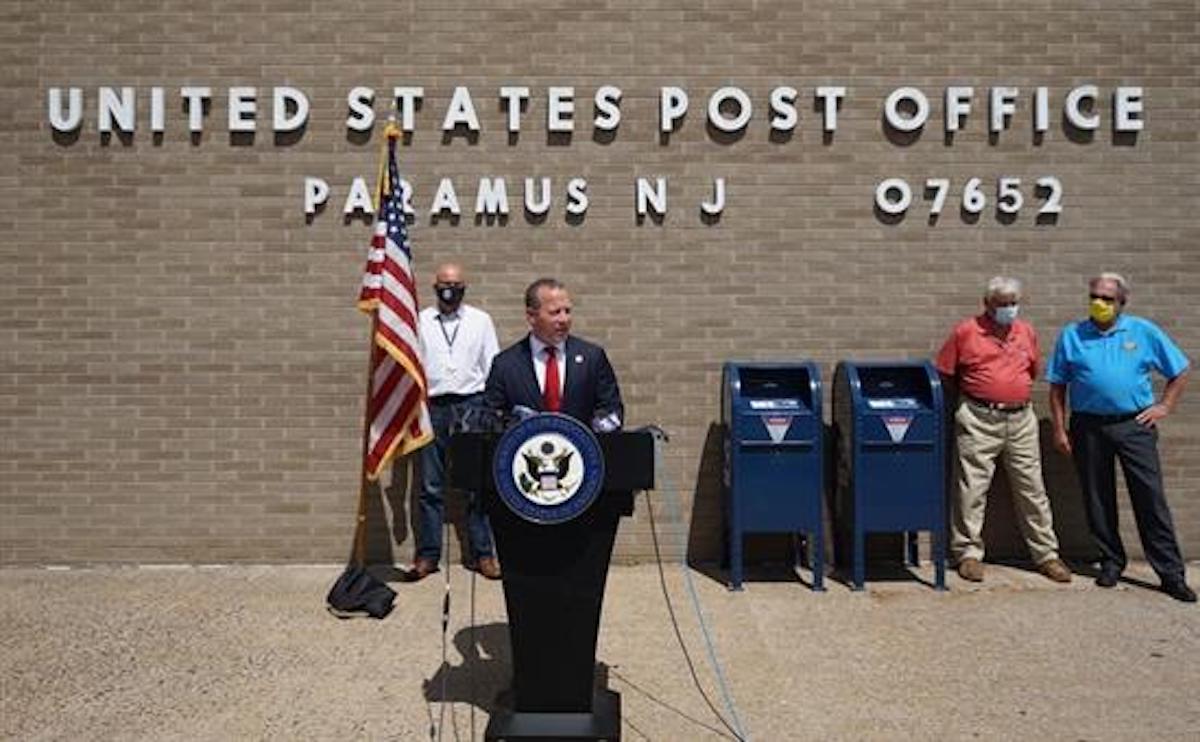 Rep. Josh Gottheimer made the case for the House Democrats’ plan to fund the United States Postal Service (USPS) at a stop in Paramus on Aug. 18.

Gottheimer, along with other Congressman in the state, visited local post offices to highlight nationwide Postal Service interference and delay issues impacting the delivery of absentee ballots, medication to seniors and veterans, Social Security benefits, paychecks and tax returns.

“Here in the Fifth District, delay issues echo what we’re hearing all throughout the state and our nation: constituents not getting their first-class mail or the medications they need on time,” stated Gottheimer. “By tampering with the mail in order to slow down the delivery of absentee and mail-in ballots, the Postmaster General’s actions to sabotage the USPS are impacting the health, safety, and economic security of North Jersey veterans, seniors, families and our small businesses.”

The USPS shipped 1.2 billion prescriptions in 2019 alone and 80% of veterans receive their medications by mail, usually within a 3-5 day window.

The controversy surrounding USPS began after President Donald Trump said he was against funding the postal system for the purpose of increasing vote-by-mail.

“This is insane and unacceptable and it’s why I am headed to Washington on (Aug.22) to ensure that the Postmaster General can’t implement any changes to slow down the operations or reduce the level of service the USPS had in place until this pandemic is over,” said Gottheimer.

“What’s taking place is active work to dismantle the USPS in order to slow down the delivery of mailed and absentee ballots—all during a pandemic when it’s safest for people to stay at home and avoid crowded areas,” he continued. “All of that—coupled with the impacts on seniors, veterans, and our local businesses—hurts all Americans and it must stop.”

Gottheimer discussed the issues with North Jersey postal workers, including ongoing mail delivery delays, the removal of mail processing machines—including in Teterboro—resulting in mail backed up in processing facilities due to fewer machines and overtime cuts at the centers.

In Paramus, Gottheimer noted the local Post Office normally has sixty to seventy letter carriers but now is down to fifty-two as efforts to hire new carriers have fallen short. The man power shortfall has happened while package volume has jumped 40%.

“Let’s be clear—there are plenty of things that need to be fixed in the postal system, and many have been fighting for years to get it done,” said the Democratic Congressman. “But gutting the mail and playing politics with the postal system three months before the election is simply unacceptable.”

Later in the day, Postmaster General Louis DeJoy announced he was discontinuing “long standing operational initiatives” at USPS facilities amid fears changes could delay election mail this Fall in the middle of the pandemic.

“To avoid even the appearance of any impact on election mail, I am suspending these initiatives until after the election is concluded,” DeJoy said in a statement. While the statement said mail processing equipment and blue collection boxes will be halted, it did not address whether changes that have already been made—like removed equipment or changes in operational practices—would be rolled back.

According to Gottheimer, the Postal Service has seen a dramatic surge in the number of packages from online shopping because of the COVID-19 crisis. From April to June, the Postal Service’s package volume increased by 708 million packages, up about 50% from last year.

The two-term congressman noted there is bipartisan, bicameral support for putting the Postal Service back on a financially sustainable path which the House of Representatives will vote on this weekend, while DeJoy is scheduled to testify before the House Committee on Oversight and Reform next week.