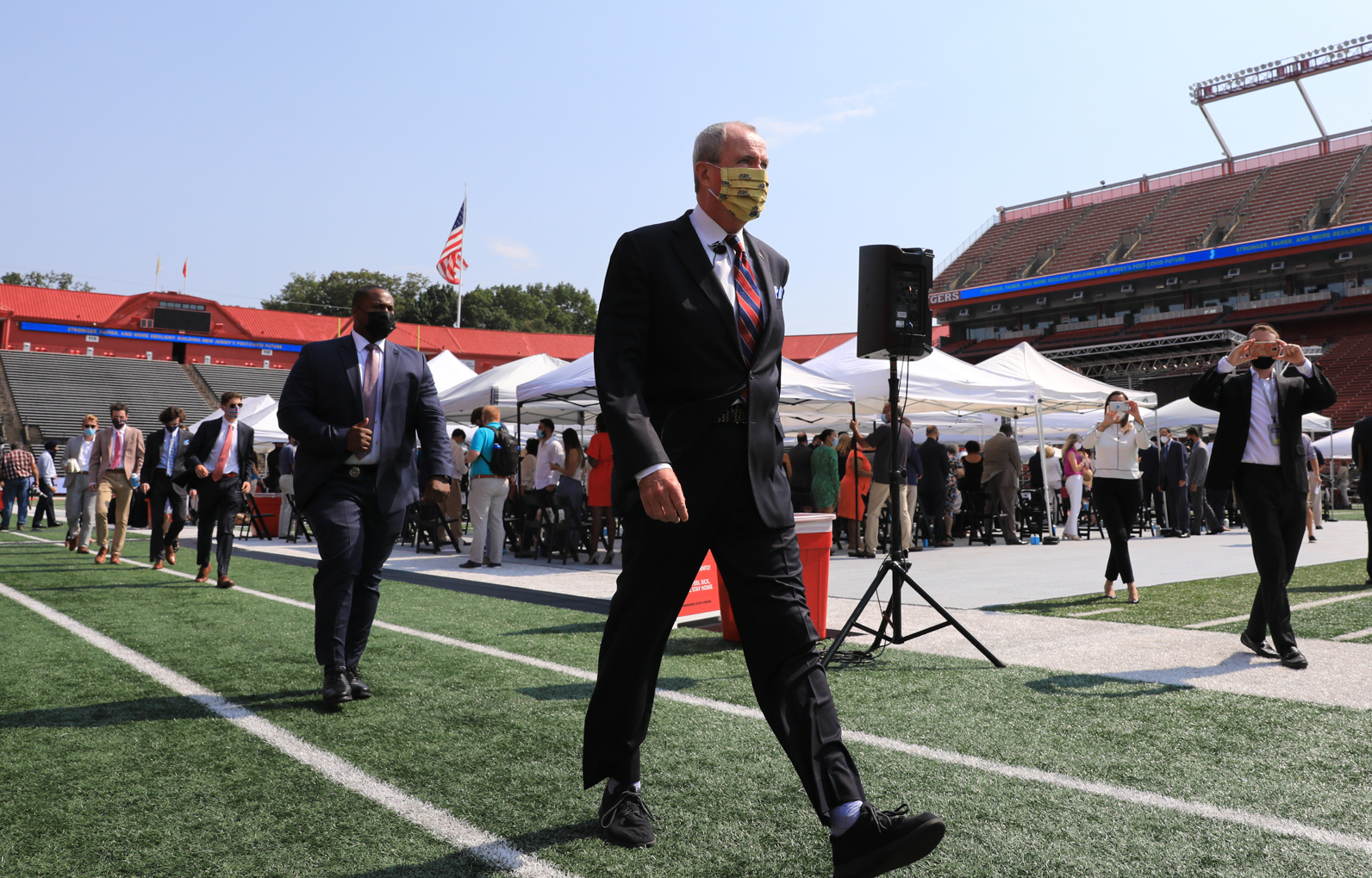 Gov. Phil Murphy said his $32 billion budget proposes “a new future” for New Jersey that enables systematic changes to provide opportunities for all residents of the Garden State.

“We can’t build the same New Jersey that we had before the coronavirus crisis,” said Murphy at his budget address at Rutgers University’s SHI Stadium Aug. 25. “We can’t run the same old plays of the past, which only provided short-term political cover while not providing any long-term systemic reform.”

“We are in a moment unlike any other. A moment from which we cannot shrink from. A moment that demands that the scope of our actions meets the size of our challenges.”

The governor, in his second budget address in six months necessitated by the coronavirus, rattled off a list of investments that state has made to those hardest hit during the pandemic, including $155 million to long-term care facilities, $150 million to colleges and universities to help defray the costs they have incurred in responding to this pandemic and more than $100 million directly into Main Street small businesses through grants and loan.

Murphy said to continue the state’s economic recovery, more federal aid is needed not just for New Jersey but for states across the U.S.

“Washington can’t walk away from the American people. Our job fighting this virus is not done, and neither is theirs,” said the first-term Democratic governor. “We still need the federal government—especially the President and Senate Republican Leader Mitch McConnell—to join us as full partners.”

“Our states need direct federal assistance, and that is an unavoidable truth,” he stated.

Murphy framed his budget proposal as “not simply about getting New Jersey back to where it used to be, but moving forward to where we need to be by building a new economy that grows our middle class and works for every single family, while asking the wealthiest among us to pay their fair share in taxes.”

The governor said he will continue to push for tax fairness, ensuring that more fortunate Garden State residents pay what they owe for the nine-month budget that must be passed by the Democratic-controlled State Senate and Assembly by Oct. 1.

“That means that the wealthiest among us—millionaires and large corporations—need to pay their fair share in taxes, whether it be on income or in buying a yacht,” Murphy said.

The governor will again ask for state lawmakers to impose a millionaire’s tax on all income above $1 million; permanently incorporate the 2.5% corporation surcharge; restore the sales tax on limousines; and remove the tax cap on boats.

Murphy defended these choices as alleviating “the pain being felt by the millions of middle-class families, and the working poor reaching to lift themselves out of poverty, and secure a better place for them through job-training and workforce development—things that will make our economy stronger and benefit our business community for generations to come.”

“In renewing my call for a millionaire’s tax, let’s be honest about who this pandemic has hit the hardest—our middle class and low-income working families—and this tax would not impact them at all.”

Additionally, the revised budget proposes to borrow $4 billion to help address the economic fallout created by COVID-19. Murphy, who sought the ability to borrow up to nearly $10 billion, said the monies will better position the state to weather any future public health and economic uncertainties.

A new initiative the governor proposed is the introduction of Baby Bonds, a first in-the-nation program to provide a $1,000 deposit for babies born in 2021 into families whose income is less than $131,000 for a family of four. Advocated by Sen. Cory Booker on the federal level, residents when they turn 18 can withdraw these funds to help them pursue higher education, buy a home, start a business, or pursue other wealth-generating activities, according to Murphy, adding the bonds would assist three of four children born in New Jersey.

The budget includes a nearly $4.9 billion contribution to bolster the state pension system and a  $2.2 billion surplus, which Murphy said is needed “to address the very real possibility of another shutdown due to a resurgence of the novel coronavirus.”

The governor’s revised budget proposal includes $1.25 billion in spending reductions across all executive state departments, including Medicaid cutbacks totaling $336 million and $59 million from the Department of Corrections.

Murphy opined that the proposed budget is a needed mixture of tax increases, borrowing and budget cuts.

“Some have looked only to draconian cuts—cuts that would disproportionately fall upon our working and middle-class families, our kids, and our communities of color while, at the same time, leading to increased property taxes,” stated Murphy. “That is the wrong way, the dishonest and failed way, and is just more of what made us so vulnerable to the ill winds of the pandemic.”

The governor said years of poor fiscal decision-making have left too many New Jerseyans vulnerable to the global recession that this pandemic has created.

“An overreliance on cuts would be counter-productive not just to our efforts to contain the economic impacts of COVID-19, but to the ability of millions of families to get ahead – notably low-income households, single mothers, and people of color,” he said.

“We’ve heard these warnings before—the last time in 2009, just as the last recession began gutting our state. And, we were one of the last states in the entire nation to get back on our feet. Maybe it’s about time we start heeding them.”