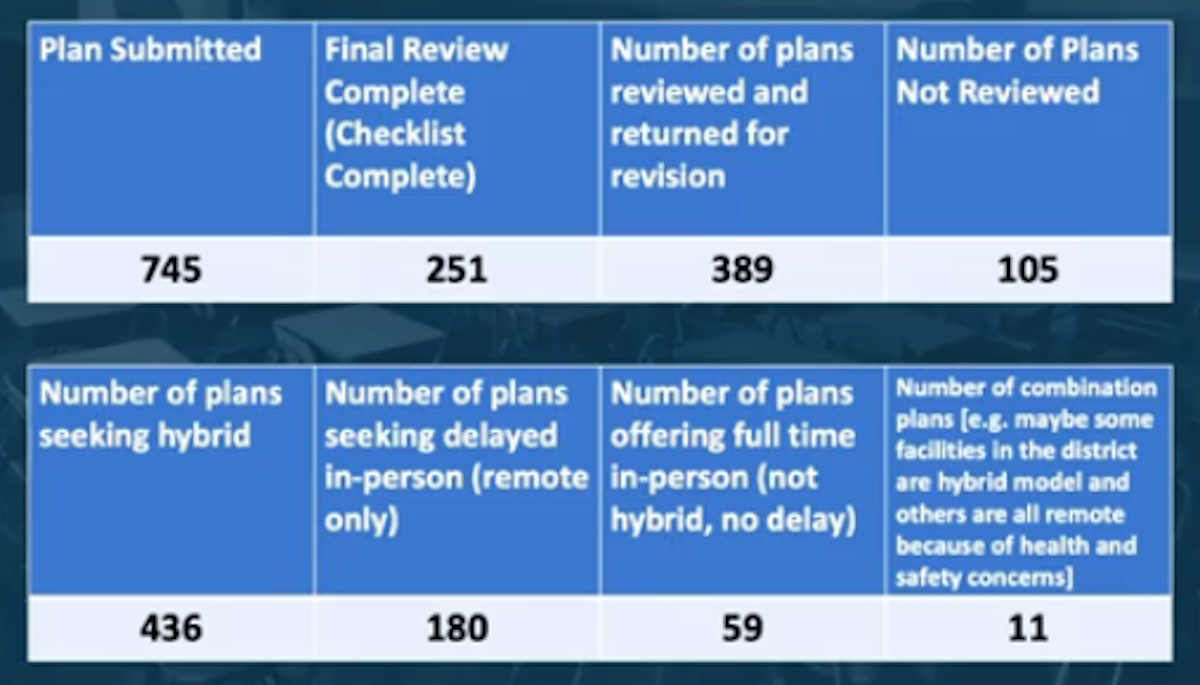 Nearly 400 school opening plans to address COVID-19 in New Jersey have been sent back to school districts in order to be revised.

Gov. Phil Murphy revealed that 736 total plans for public and private schools have been submitted to the New Jersey Department of Education (NJDOE). Of those, 189 have been completed and deemed acceptable.

A total of 389 have been reviewed and returned to districts for revisions. An additionally 145 are awaiting review, which Murphy said would be done shortly as most school openings are set in the coming weeks.

The state updated that each of the six regions in the state is safe for school reopenings, with the two North regions COVID-19 activity level classified as low.

“We recognize the tremendous differences between and within our school districts that make a one-size-fits-all solution impractical,” said Murphy. “We have provided the communities the flexibility they need to make the right decision that works best for them.”

Non-public and public schools must file a certification with the NJDOE that they can meet the state’s health and safety rules, on the first day of in-person classes.

To that end, districts are to fill out a checklist on the NJDOE website to see if they can meet nearly 50 guidelines for in-person classes, including social distancing, safe school entry points, a contact tracing plan, and safe ways for students to eat meals.

If a school is unable to meet one or more of the guidelines, the district can request to start the year with all-remote learning. Those approved will then need to file a plan of what adjustment the district will need make and a date to start in-person classes.

The daily rate of infections from those tested as of Aug. 20 was 1.3%. The state is no longer using serology tests as health officials explained those results show a past presence of the disease as well as a current one. By region, the north tested at 1.2%, the central at 1.1% and the south 2.0%.

As for the rate of transmission, it decreased to 0.85 from 0.90 the day before. Officials have continually cited transmission rate and positivity rate as health data they rely on to track how the coronavirus is being contained in New Jersey, guiding them in determining when restrictions have to be tightened or lifted.

Officials reported 446 patients are hospitalized, with 227 confirmed cases and 219 patients under investigation for having coronavirus. The north tier had 194 patients hospitalized, the central 99 and the south 153.

Of those hospitalized, 66 are in intensive care units and 27 on ventilators, while 26 patients were discharged.

Another 319 cases are still under investigation to determine where the person resides.

State officials are tracking cases of Multisystem Inflammatory Syndrome in children who in turn  test positive for COVID-19. One new case was reported Aug. 24, bringing the total to 55 cumulative cases for children ranging in age from 1-18. All have tested positive for COVID-19 or have antibodies in their blood. No children are currently hospitalized. No deaths have been reported from the disease.

Persichilli stated “Black and Hispanic children account for a disproportionately high number” on a national scale. While only a small sample, Persichilli reported the racial breakdown in New Jersey was 40% Hispanic, 36% Black, 14% White, 6% Asian and 4% other.

Health officials noted 189 long-term care facilities are currently reporting at least one case of COVID-19, accounting for a total of 12,670 of the cases, broken down between 8,042 residents and 4,628 staff.

The state’s official death total will now be reported as those that are lab confirmed, sits at 7,048 on Aug. 24. The facilities are reporting to the state 6,703 residents deaths and 121 staff deaths.