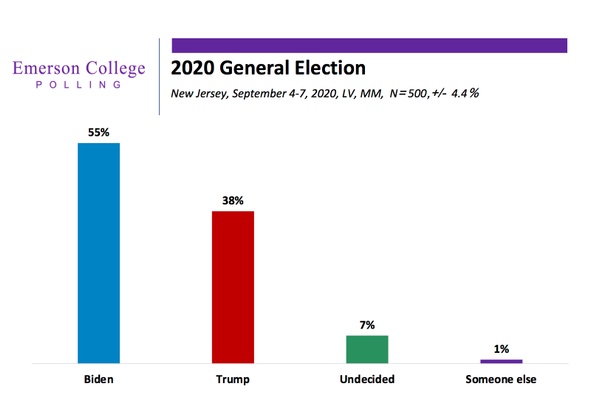 A new poll shows New Jersey is on track to remain blue this year.

In the Senate race, Booker leads Republican challenger Rik Mehta 52% to 28%, 16% were undecided while 5% plan to vote for someone else.

“Biden is performing a few points better than (Hillary) Clinton did in 2016 which is a similar trend we have seen in other states around the country,” said Spencer Kimball, Director of Emerson College Polling, which conducted the survey between Sept. 4-7.

President Trump’s popularity in New Jersey is about 10 points below his national numbers with the majority of New Jersey voters (56%) disapproving of the job Trump is doing as President, whereas 38% approve, and 7% were neutral.

The Emerson Poll follows the results of a July Monmouth University Poll which found Biden with a 12 point lead. Additionally, Biden held a significant advantage among the one in five who did not have a favorable opinion of either candidate.

Biden had the support of 53% of registered voters in July, compared to the 41% aligned for Trump. In June, Monmouth reported a 52% to 41% split.

The trend line continues gravitating towards Biden, who led 50% to 41% in May, 48% to 44% in April, and 48% to 45% in March. While half of the nation’s electorate ruled out voting for Donald Trump, four in ten say the same thing about Joe Biden.

The way voters will cast their ballot show significant differences along party lines. Of those planning to vote for President Trump, 53% plan to vote in-person on election day and 25% intend to vote early in-person.

GOP voters lead amongst those who reported they will have no confidence in the election results, with 11% compared to 8% of Independents and 2% of Democrats.