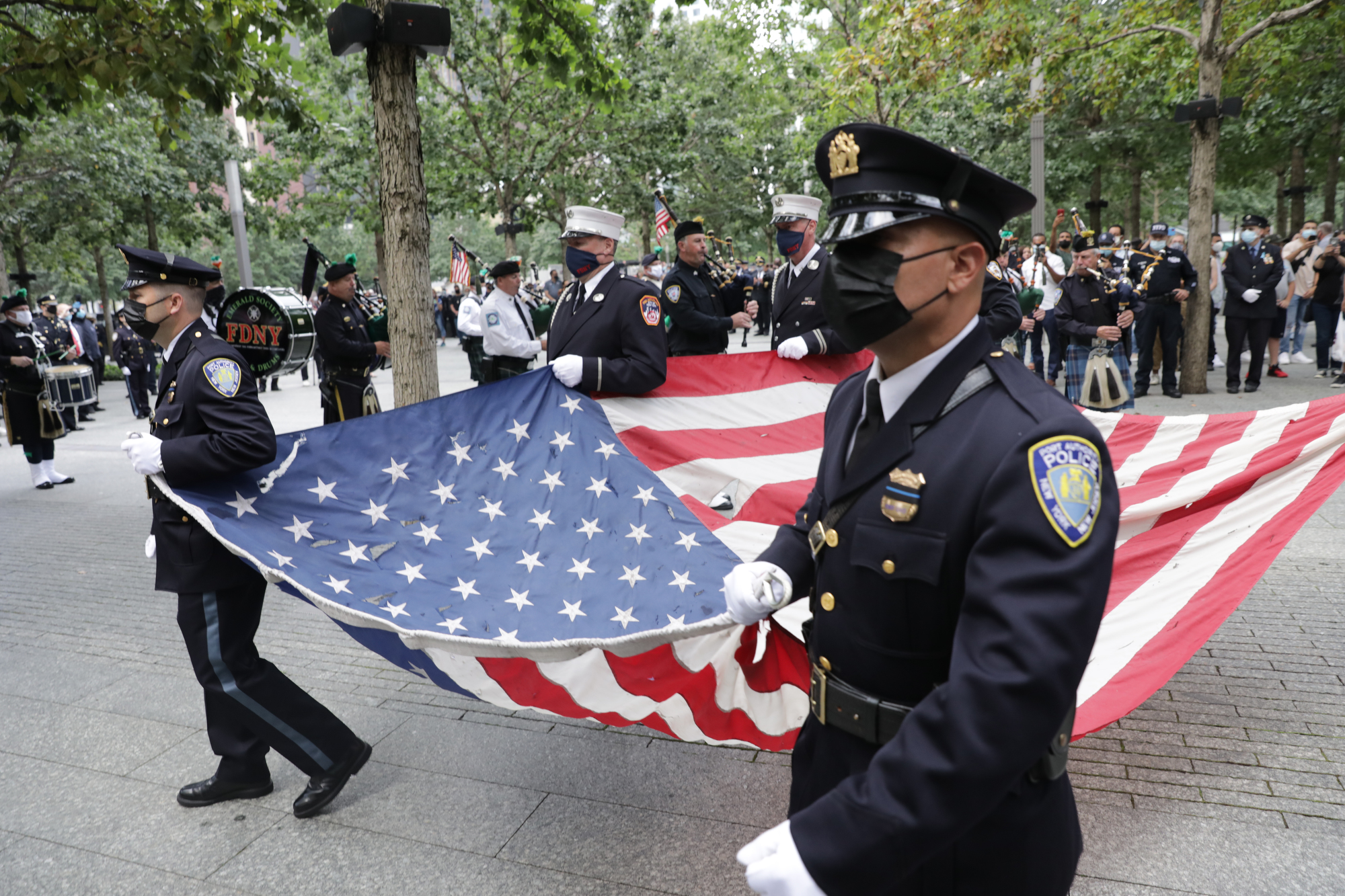 New Jersey mourns 19 years after two commercial planes were used to crash into the World Trade Center towers in New York City, another into the Pentagon in Washington, D.C and the final one taken down by passengers over a field in Pennsylvania. In all, nearly 3,000 innocent people, of whom almost 700 were New Jersey residents, that were killed in the 2001 terrorist attacks

Below are remembrance and photos from ceremonies held in our area in the own words of North Jersey politicians.

On the 19th anniversary of 9/11, we recommit to the values of liberty and community upon which this nation was built. We are a nation of individuals, but, as the first words of our Constitution notes, we are “We the People,” and we rise as fall as one. We were knocked low 19 years ago today. But we got back up & showed the world how our nation comes together.

With everything we’ve been facing over these past six months, this is the most pertinent of anniversaries, because we’re now forced to marshal that inner strength again.

9/11 reminded us of the value of our New Jersey family. We’re being reminded of that again, today. Let’s all take care of each other. It’s not just about one of us – it’s about all nine million of us.

Today, as we remember the events of September 11th, 2001, our nation is faced with enormous challenges. We remain in the midst of a deadly pandemic and unprecedented economic hardships. We continue to reckon with injustices that have plagued our nation since its founding. And our politics remain as divisive as ever.

Yet, September 11th reminds us that we are all Americans—and that we rise and fall together. We remember the 2,974 lives—including more than 700 New Jerseyans—who perished on that day, 19 years ago. We also honor the thousands of first responders, family, friends and neighbors who have since succumbed to 9/11-related illnesses.

And as we honor the memories of the loved ones so cruelly taken from this world, we must never forget the unity that brought us together in the wake of such evil. Let us remember the common threads that bind us together as a people—our love for family, drive for success, respect for diversity, commitment to community, and our belief in common decency.

These are the American values that kept us going in the days after September 11th.  These are the values that will give our nation the strength today to meet our toughest challenges and to resist any temptation to give into fear, no matter what. And these are the values that empower us to go on living while cherishing the memory of those lost. So let this be our solemn pledge—to unite behind our shared humanity, to keep those lost on 9/11 in our hearts forever, and to never forget.

Today we remember the beautiful souls lost on September 11, 2001. We also remember the extraordinary heroism of the brave first responders and all who stepped up to help their fellow Americans in the face of unspeakable violence and tragedy. Never forget.

With great loss, and in the face of great evil, one thing that those attacks did accomplish was to bring our nation together—especially here in North Jersey—but also countrywide, coming together past any lines that divide us, like party or region. We came together as one community—to love our neighbors and our nation—similar to what we’ve done throughout these past few months, doing everything we can to keep our neighbors safe. Just as we did then, we still stand together in unity today. On that morning, our brave first responders ran directly into danger when others ran out. I’m proud that this Congress, Members of both parties put politics aside and supported America’s patriots by passing the Never Forget the Heroes Act and getting it signed into law, so that we can fully get the backs of our 9/11 first responders, survivors, and their families—as they truly deserve.

It is hard to believe that it has been 19 years since the September 11th terrorist attacks. We mourn and remember the lives of those we lost that day and honor the first responders who heroically sacrificed their lives to save others.

Of the nearly 3,000 people that died on September 11th, 749 were New Jerseyans. Families and friends in our community lost beloved wives, husbands, mothers, fathers, daughters, sons, grandparents, aunts, and uncles. And for the families of first responders and residents of lower Manhattan that worked on or near the pile, the toxic soup of dust and chemicals caused lasting health problems. Last summer, after years of obstruction, we were finally able to pass a permanent reauthorization of the September 11th Victim Compensation Fund, to ensure survivors and families continue to receive the support they need and deserve.

America was forever changed that morning in September and we will never forget those who died, or the heroes who ran toward danger.

The pandemic has again tested our communities. We have lost too many friends and neighbors, and our first responders have again answered the call to serve others first. We have seen acts of heroism and kindness, both large and small. As we did after September 11th, we must remember that more unites us than divides us, and that we must take care of each other.

Today, we stand together in grief, united but not broken.

Nineteen years after the attacks that tore so many from us, we mourn the family, friends, neighbors, and over 700 New Jerseyans who lost their lives. We honor the first responders who ran towards a danger we could not have imagined the day before. In the dark days that followed, our communities rallied together, and found strength in one another as we grieved as one. When we look across the Hudson from the 8th District, we see an empty sky and remember the legacy left behind by those we lost. Let us remember that strength and common good now, and in the months ahead.

Nineteen years this morning. Despite all the trials and tribulations our nation has faced since that unreal morning, we must resolve NEVER to forget. We must ALWAYS keep up our resolve, and protect our citizens from the cowardly acts of terrorists who would destroy our way of life.

Nineteen years ago evil struck. We mourn its victims, console their survivors, and resolve to confront our enemies wherever and whenever we must so that our nation can live in freedom and peace.

Today we pay tribute to those who we’ve lost 19 years ago in an incorrigible act of terror against our great country. Those terrorists may have destroyed a symbol of American ingenuity and caused great pain for many, but no one will ever be able to crush our American spirit, for it is united, it is fierce and everlasting.

September 11th is a day of national mourning, when we remember those who were tragically lost in New York, DC and Pennsylvania. Nearly two decades have passed and our State is still scarred by that day. We will continue to work for a better America, that meets terror with love. We will never forget. We will always remember.

On the nineteenth anniversary of September 11, 2001, we remember and honor the thousands of innocent victims who tragically perished. ?9/11 is a day of reflection, a time to mark the sacrifices made by our first responders, servicemembers, and veterans in the wake of the attacks.? Today, we unite to honor those who made the ultimate sacrifice, and we recognize the resiliency of our great nation.

Life is indeed a precious and fleeting gift for which we should all be thankful. Take nothing for granted, and always keep in mind those who perished that day—and never forget those who have suffered in silence and continue to suffer today.

When thinking back to that sunny Tuesday morning, it’s difficult not to think about those who were unknowingly sharing one last family breakfast, one last ride to school, and one last “I love you.” Today we hold the ones closest to us just a little bit tighter, in honor of those who can no longer do the same. Now, more than ever, we must never forget those we lost and those who sacrificed. God bless all of our emergency personnel, the victims of that fateful day, and their families.