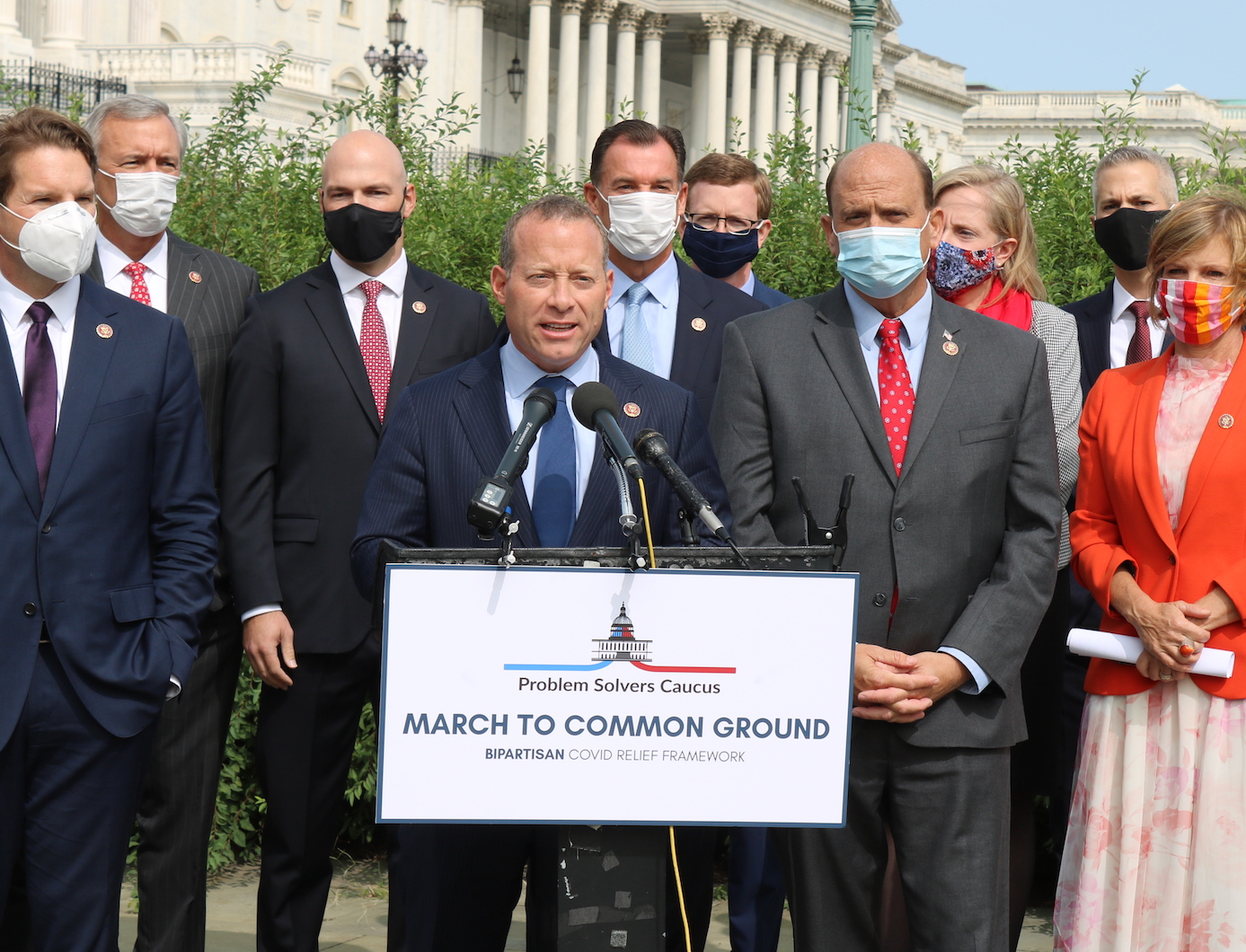 With no agreement in sight between the White House and Congressional leadership,  the bipartisan Problem Solvers Caucus is offering a plan to help break the gridlock on the latest COVID-19 relief package and encourage negotiators to get back to the table.

Entitled “March To Common Ground,” the caucus led by Co-Chairs Reps. Josh Gottheimer (D-NJ) and Tom Reed (R-NY), say they have developed a framework after listening to constituents and stakeholders over the past six weeks.

“What brings us together — 25 Democrats and 25 Republicans — is our shared goal of finding a pragmatic solution — a bipartisan path forward — to help get negotiators to return to the table,” said Josh Gottheimer. “Our March to Common Ground package does just that — it lays out a common sense framework to get help and resources out to American families and businesses.

The proposed legislation was designed by lawmakers for a duration of six months to reach through the next inauguration, except for state and local funding which extends for a full year.

The framework calls for both new stimulus money and the reallocation of previously appropriated CARES Act funding, and allocates resources to the following key categories:

Supporters of the proposed bill noted depending on the severity of the pandemic and if a successful vaccination program is adopted by March, 2021, a system of automatic “boosters” are designed to incrementally increase the amount of relief to individuals and families. Conversely, a system of “reducers” will decrease the total cost of the package.

While Democrats pushed a $3.4 trillion plan through the House in May, Senate Majority Leader Mitch McConnell (R-KY)  waited until late July to propose any. Members of his caucus, citing concerns about the national debt and unhappy with previous White House concessions made to Democrats, refused to take up the House bill.

In September, Republicans finally offered a scaled-back measure providing about $350 billion in new funding and repurposed hundreds of billions more from the original stimulus law. The measure included federal aid for unemployed workers, small businesses, schools and vaccine development, as well as reviving weekly federal jobless benefits that lapsed at the end of July at $300 — half the original amount. That bill was unable to win Democratic backing and failed to pass.

Reed said Americans deserve a functioning Congress that can rise to the challenge of the day.

“Our framework reflects months of bipartisan consensus-building on the actions the federal government can take to help working families and local communities across the country as they navigate the impacts of COVID-19,” said the Pennsylvania congressman. “We are hopeful this package will help bring lead negotiations back to the table as we try to solve this problem for the American people.”

State officials noted seven deaths occurred in the last 24 hours of reporting that have not yet been lab confirmed.

The daily rate of infections from those tested as of Sept. 11 was 1.9%. The state is no longer using serology tests as health officials explained those results show a past presence of the disease as well as a current one.

As for the rate of transmission, it remained unchanged from the day before at 1.06. Officials have continually cited transmission rate and positivity rate as health data they rely on to track how the coronavirus is being contained in New Jersey, guiding them in determining when restrictions have to be tightened or lifted.

Officials reported 406 patients are hospitalized. Of those hospitalized, 90 are in intensive care units and 35 on ventilators, while 17 patients were discharged.

Another 301 cases are still under investigation to determine where the person resides.

Health officials noted 159 long-term care facilities are currently reporting at least one case of COVID-19, accounting for a total of 7,756 of the cases, broken down between 4,846 residents and 2,910 staff.

The state’s official death total will now be reported as those that are lab confirmed, sits at 7,135 on Sept. 15. The facilities are reporting to the state 6,754 residents deaths and 121 staff deaths.