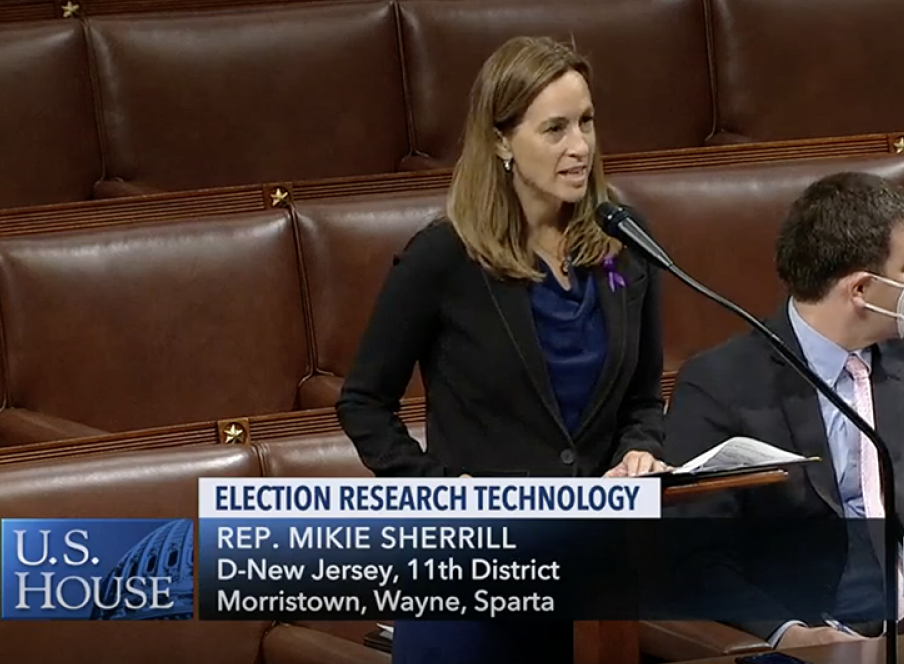 Rep. Mikie Sherrill applauded passage of the Election Technology Research Act by the House of Representatives Sept. 16, arguing the bipartisan bill was passed at a time when it is desperately needed.

“The security and sanctity of our elections is at the very core of our democracy,” said Sherrill.

The bill would allow the National Institutes of Standards and Technology (NIST) and the National Science Foundation (NSF) to investigate the security of U.S. voting systems, and how modernization efforts could take place.

Sherrill, who serves as Chairwoman of the House Science, Space, and Technology Subcommittee on the Environment, was joined by co-sponsors Rep. Anthony Gonzalez (R-OH), Rep. Eddie Bernice Johnson (D-TX), and Frank Lucas (R-OK).

The act would give NIST and NSF new mandates to research cybersecurity, privacy, auditing, and other areas related to the integrity of U.S. elections.

“I’m proud to see the House of Representatives come together to support this core American value,” the Congresswoman said.

The bill would establish an Elections Systems Center of Excellence at NIST designed to foster collaborations among stakeholders, both government and private, while NSF would be given research grants to look into the current state of affairs.

NIST would be tasked with supporting secure elections, while the Government Accountability Office would track NIST’s activities. Technically, it would also amend the Help America Vote Act definition of “voting systems” to include electronic poll books and voter registration systems in addition to voting machines.

The bill comes as New Jersey goes to a hybrid model for the November general election. The state will be primarily conducting the 2020 election by mail-in ballot, a plan announced in mid-August by Gov. Phil Murphy.

All registered voters in New Jersey will receive a ballot in the mail, which they can mail back. Alternatively, they can deposit it in a secure drop box, or, hand it directly to a poll worker at a polling place on Election Day to allow for in-person voting.

New Jersey GOP members have attacked the plan, saying an in-person election should be prioritized.