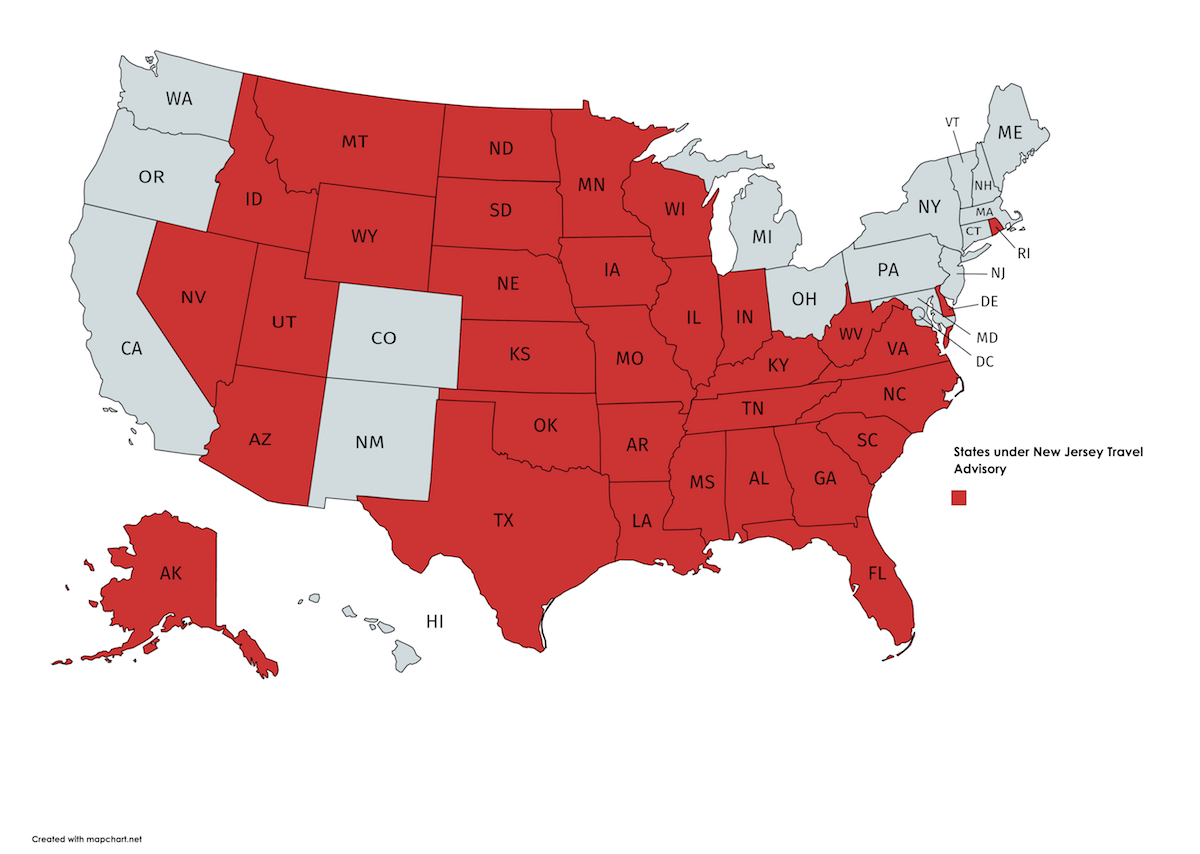 New Jersey in its weekly update added five states to its COVID-19 travel advisory list as new infection cases were over 400 for the 11th time in the last 14 days and all 21 counties now have at least a 1,000 cases cumulatively.

The updated advisory includes five additional states—Arizona, Minnesota, Nevada, Rhode Island, and Wyoming—bringing the total to 35 states and territories. The travel advisory applies to any person arriving from a state or territory with a positive test rate higher than 10 per 100,000 residents or a state with a 10% or higher positivity rate over a seven-day rolling average.

“To maintain our steady progress on the road back, we must continue to be vigilant and practice personal responsibility to reduce the potential for outbreaks,” said Gov. Phil Murphy in a press statement. “It remains critically important for anyone arriving to New Jersey from these 35 states and territories to get tested for COVID-19 and self-quarantine for 14 days.”

The advisory asks individuals traveling to New Jersey from states or territories with significant community spread of COVID-19 to quarantine for a 14-day period from the time of last contact within the identified state or territory.

Travelers and those residents who are returning from impacted states should self-quarantine at their home, hotel, or other temporary lodging. Individuals should leave the place of self-quarantine only to seek medical care/treatment or to obtain food and other essential items.

State officials noted four deaths occurred in the last 24 hours of reporting that have not yet been lab confirmed.

The daily rate of infections from those tested as of Sept. 17 was 1.8%. By region, the north has a rate of 1.3%, central at 2.2% and the south at 2.5%. The state is no longer using serology tests as health officials explained those results show a past presence of the disease as well as a current one.

As for the rate of transmission, it increased to 1.13 from 1.12 the day before. Murphy has noted the increase is a result of the uptick in positive tests. Officials have continually cited transmission rate and positivity rate as health data they rely on to track how the coronavirus is being contained in New Jersey, guiding them in determining when restrictions have to be tightened or lifted.

Officials reported 417 patients are hospitalized, with 80 in intensive care units and 34 on ventilators, while 15 patients were discharged.

Another 326 cases are still under investigation to determine where the person resides.

Health officials noted 158 long-term care facilities are currently reporting at least one case of COVID-19, accounting for a total of 7,027 of the cases, broken down between 4,346 residents and 2,681 staff.

The state’s official death total will now be reported as those that are lab confirmed, sits at 7,146 on Sept. 22. The facilities are reporting to the state 6,760 residents deaths and 121 staff deaths.