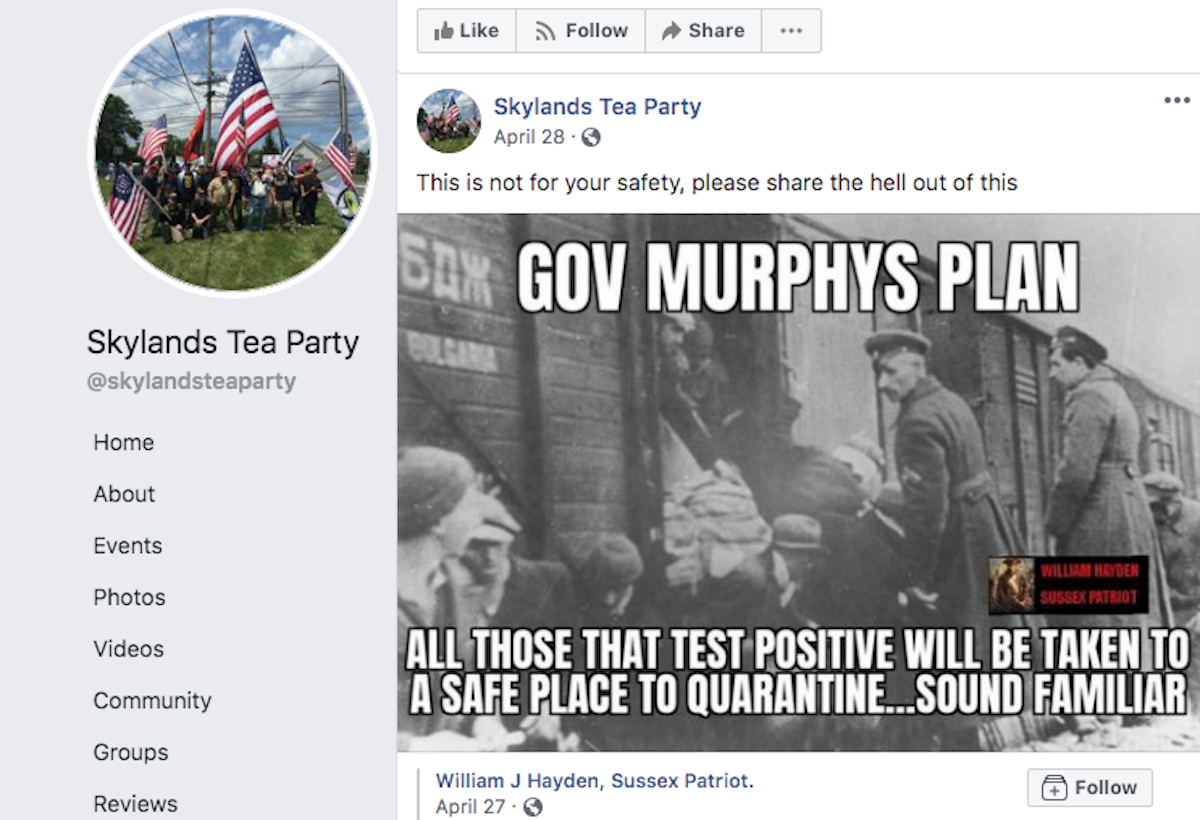 For members of the Frank Pallotta campaign, the leaders of the Skylands Tea Party are conservative Republicans looking to hold elected officials accountable.

But a view of Skyland’s social media activity showcases a disturbing record that includes comparing wearing masks to the yellow stars Jews were forced to wear during the Holocaust.

The Sussex County-based Skylands Tea Party president is William J. Hayden, who has been outspoken in his support of Pallotta in his bid to unseat Rep. Josh Gottheimer in the 5th Congressional District. Hayden has promoted Pallotta on the organization’s page and the campaign sees him as a supporter looking to advance Republican policies.

Kelly Ann Hart, campaign manager for Pallotta, said that Hayden has no official role with the campaign.

Asked about the images on the Skylands Tea Party Facebook page, Hart stated “Frank doesn’t follow the social media pages of everyone he interacts with or everyone who supports him. Who could possibly have that much free time?”

The posts in question include an April 28 post, in which Hayden writes in response to Gov. Phil Murphy hiring companies to help New Jersey implement a technological tracing program “you and everyone else who has been found to be positive, will be brought to a “safe isolation place” where you will have to stay….for how long he did not say! NJ IS THE NEW NAZI GERMANY! Not long before the rest of the country will follow IF people don’t wake up and aggressively fight this!!!”

That was followed up in a July 17 post where Hayden states that “Masks are a clear violation of your first amendment rights” below a meme that compares masks to yellow stars the Nazis made Jews wear with the words “They were forced to wear a star, we are forced to wear a mask.”

Campaign officials for Pallotta said he had not seen the images and suggested the context may have been used as satire or a metaphor.

Hart complemented Hayden and the Skylands Tea Party for the work done in support of the family members of those affected by COVID-19 in nursing homes in Sussex County.

“Hayden and Skylands have organized to push county government and the Legislature to hold independent investigations into why COVID-19 patients were sent into nursing and veterans’ homes, resulting in the deaths of thousands statewide,” said Hart in an email.

“We welcome the support of everyone in holding Governor Murphy and his administration to account, and would sincerely welcome Congressman Gottheimer’s efforts in this regard,” stated the campaign manager.

Additionally, Hart suggested if “guilty by association” is a campaign measure, voters should question Gottheimer’s clients list when he worked for the global public relations and communications firm Burston-Martseller’s as a high-ranking executive.