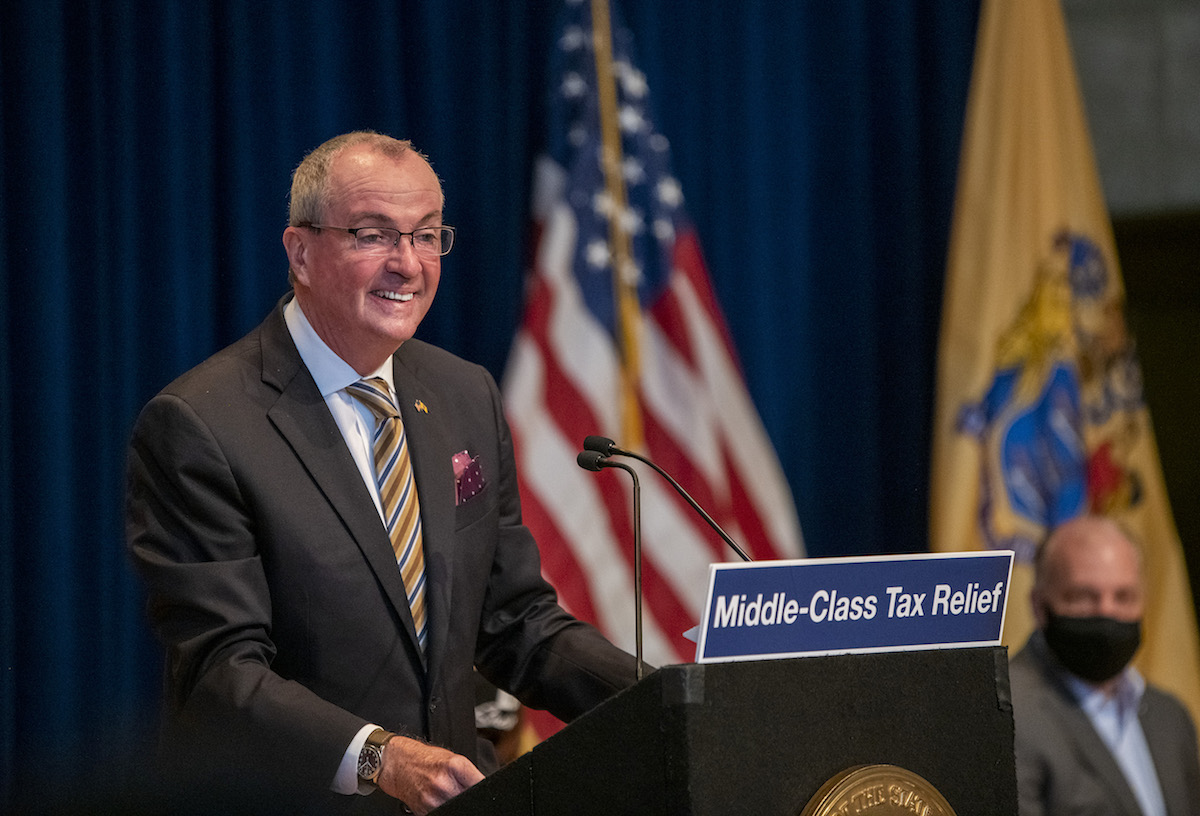 As both houses of the New Jersey legislature prepare to cast their votes on a nine-month 2021 budget Sept. 24, Gov. Phil Murphy believes it is one that best helps the state now and in the future.

“All-in-all, I am proud of the budget that we have agreed upon,” said Murphy at a press briefing Sept. 23. “This budget lives up to our most-important objective: preparing our state for a stronger, fairer, more resilient future.”

The $32.7 billion, nine-month budget centerpiece is an agreement between Murphy, Senate President Steve Sweeney, and Assembly Speaker Craig Coughlin to raise the tax rate on income more than $1 million to 10.75% from 8.97 %, matching the tax rate paid on income of more than $5 million.

The deal fulfills a major campaign promise of Murphy’s while providing a $500 rebate to middle- and lower class state residents in the summer of 2021.

“I’m especially proud that our budget will include meaningful tax fairness by reinstating the millionaire’s tax and providing direct tax relief to hundreds of thousands of middle-class and working families with children,” said Murphy.

“This budget will further our ongoing work to restore fiscal responsibility and accountability, live up to our obligations and ensure the strong surplus we need for the unknowns ahead.”

The budget includes an increase in taxes on corporations, boosts the state’s surplus to more than $2.5 billion and calls for $4.5 billion in borrowing to help close a revenue shortfall caused by the coronavirus pandemic.

When questioned about borrowing, Murphy said it was one lever that the state is using due to the historic nature of revenues lost in the last six months, one he wished the state did not have to use.

“While our revenues are a little better then when we first submitted, it is still off dramatically,” said Murphy. “Federal cash is one lever we have not pulled…and at the top of that list we would use it for debt reduction.”

What’s In, What’s Out

The legislature spending plan restored a number of programs, including funding for school-based mental health services and subsidies paid to New Jersey’s hospitals for providing care to the uninsured.

“Not everything I proposed or that the Legislature wanted is included in this final budget,” said Murphy. “But I will keep advocating for the programs and causes I believe in. That’s the way the budget process works.”

The first-term Democratic governor specifically cited his baby bonds proposal as one that he believes in and will keep fighting for.

The governor ticked off other budget priorities that are included, including increased investments in our public education system, such as pre-K, tuition assistance, and job-training programs, invests in key infrastructure to provide cleaner air and water, and better mass transportation.

“This budget safeguards key programs that our families and residents are relying upon to see themselves through the pandemic, especially our most-vulnerable residents, and doesn’t pull the rug out from under them,” said Murphy.

The daily rate of infections from those tested as of Sept. 19 was 1.9%. By region, the north has a rate of 1.9%, central at 1.9% and the south at 2.1%. The state is no longer using serology tests as health officials explained those results show a past presence of the disease as well as a current one.

As for the rate of transmission, it increased 1.15 from 1.13 the day before. Murphy noted while preferring it lower, health officials expect the rate to hover above 1.0 for a while due to the increase of COVID-19 cases. Officials have continually cited transmission rate and positivity rate as health data they rely on to track how the coronavirus is being contained in New Jersey, guiding them in determining when restrictions have to be tightened or lifted.

Officials reported 430 patients are hospitalized, with 231 confirmed and 228 awaiting confirmation. Of those hospitalized, 90 are in intensive care units and 31 on ventilators, while 32 patients were discharged.

Another 346 cases are still under investigation to determine where the person resides.

Health officials noted 159 long-term care facilities are currently reporting at least one case of COVID-19, accounting for a total of 6,897 of the cases, broken down between 4,260 residents and 2,637 staff.

The state’s official death total will now be reported as those that are lab confirmed, sits at 7,149 on Sept. 23. The facilities are reporting to the state 6,761 residents deaths and 121 staff deaths.