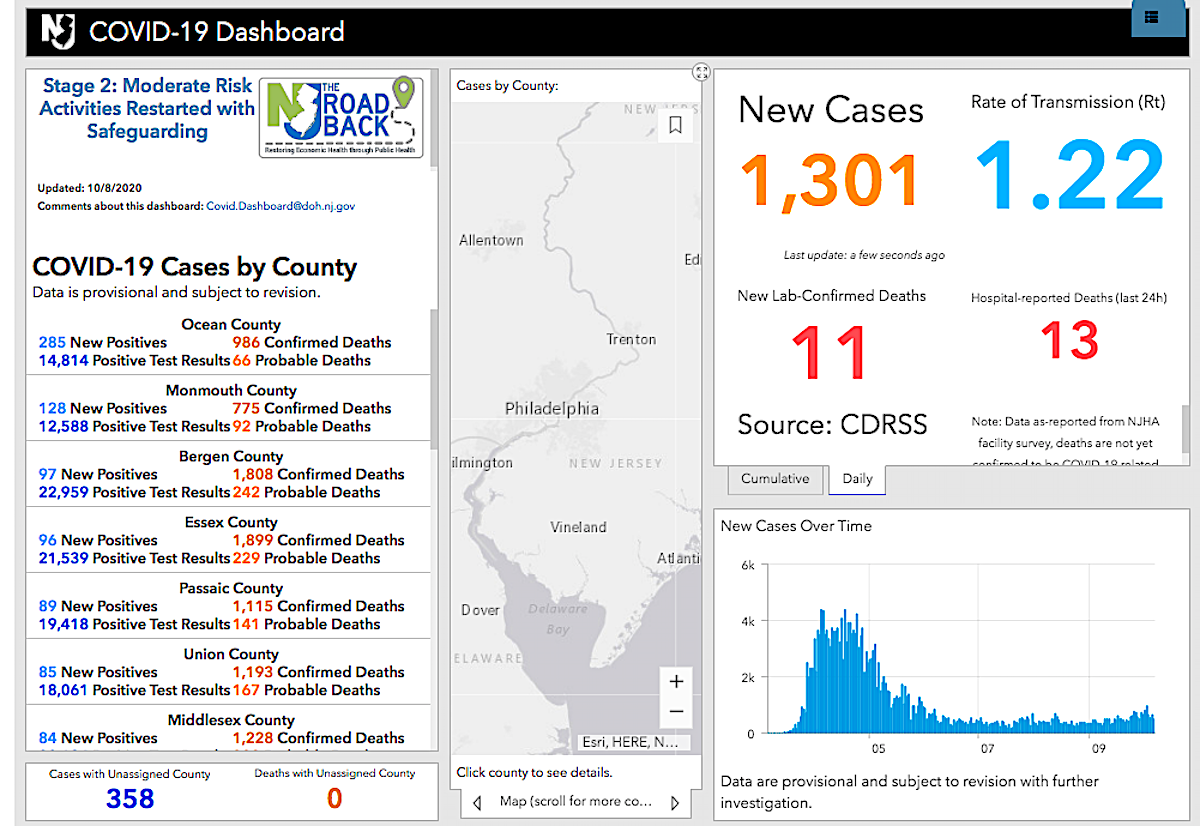 New Jersey reported over 1,300 new COVID-19 cases on Oct. 8, the first time it has reached that number since May according to worried state officials.

“Certainly it is a concern that we’re seeing what we’re seeing…that number is so high,” stated Department of Health Communicable Disease Service Medical Director Dr. Edward Lifshitz at a press briefing.

Murphy noted that in his travels across the state, an overwhelming majority of residents are wearing masks in order to contain the spread of the coronavirus. But he is bewildered by those that “still don’t get it.”

“For those of you who haven’t (taken this seriously), wake up,” said Murphy. “To say that it can not take your life is completely false.”

State officials noted that without therapeutics or a vaccine, New Jersey residents are left with very few but easy ways to contain the spread of the coronavirus.

“What we have is not advanced calculus,” said Murophy. “What we have is basic stuff—social distancing, wearing (masks), its washing your hands with soap and water, its taken yourself off the field whether you have traveled to a hotspot, known that you have been exposed to somebody with COVID or if you got symptoms….And lastly get tested but get tested at the right point.”

The first-term Democratic governor was aghast at the actions and comments of President Donald Trump after leaving Water Reed Medical Center earlier in the week.

“I was extremely disappointed to hear the President’s words when he got out of the hospital. But when you see the mask coming off and when you hear the words like ‘don’t let the virus dominate your life,’ ‘be strong,’ said Murphy, shaking his head in bewilderment.

The governor said in his experience when speaking with with survivors who have lost loved ones, they have two things in common

“No. 1, they fought this virus tooth and nail, in some cases for weeks, in other cases for months,” commented Murphy. “They fought it, they didn’t give an inch. They fought it as hard as they could in every way they could and that is a common trait among all those lives we lost.”

The hotspot in the state continues to be Lakewood in Ocean County. Of the 285 cases in the county, 206 were residents of Lakewood. The next closest county was Monmouth with 128 new cases.

Murphy noted the two Shore countries were not the only areas of concern, mentioning Bergen County with 97 new infections, Passaic with 89, and Essex with 96.

Murphy directed his ire as well at those he believed COVID-19 is being overblown in comparison to the seasonal flu.

“For those of you you who are under the misguide thinking that this is just like the flu, it’s well past time for a wakeup call,” said Murphy, noting that in seven months the number of New Jersey that have died from COVID-19 is 11 times the amount who passed during the 2018-19 flue season.

The daily rate of infections from those tested as of Oct. 4 was 3.7%. By region, the North has a rate of 3.0%, Central at 4.3% and the South at 4.1%. The state is no longer using serology tests as health officials explained those results show a past presence of the disease as well as a current one.

As for the rate of transmission, rising to 1.22 from 1.24 the day before. Officials have continually cited transmission rate and positivity rate as health data they rely on to track how the coronavirus is being contained in New Jersey, guiding them in determining when restrictions have to be tightened or lifted.

Officials reported 652 patients are hospitalized, with 422 confirmed and 230 under investigation. by region, there were 287 in the North, 192 in the Central and 173 in the South.

Of those hospitalized, 148 are in intensive care units and 52 on ventilators, while 50 patients were discharged.

Another 358 cases are still under investigation to determine where the person resides.

Health officials noted 149 long-term care facilities are currently reporting at least one case of COVID-19, accounting for a total of 5,776 of the cases, broken down between 3,462 residents and 2,314 staff.

The state’s official death total will now be reported as those that are lab confirmed, sits at 7,172 on Oct. 8. The facilities are reporting to the state 6,793 residents deaths and 121 staff deaths.