OPINION: Vote Yes for Marijuana, Veterans, No to Redistricting Delays 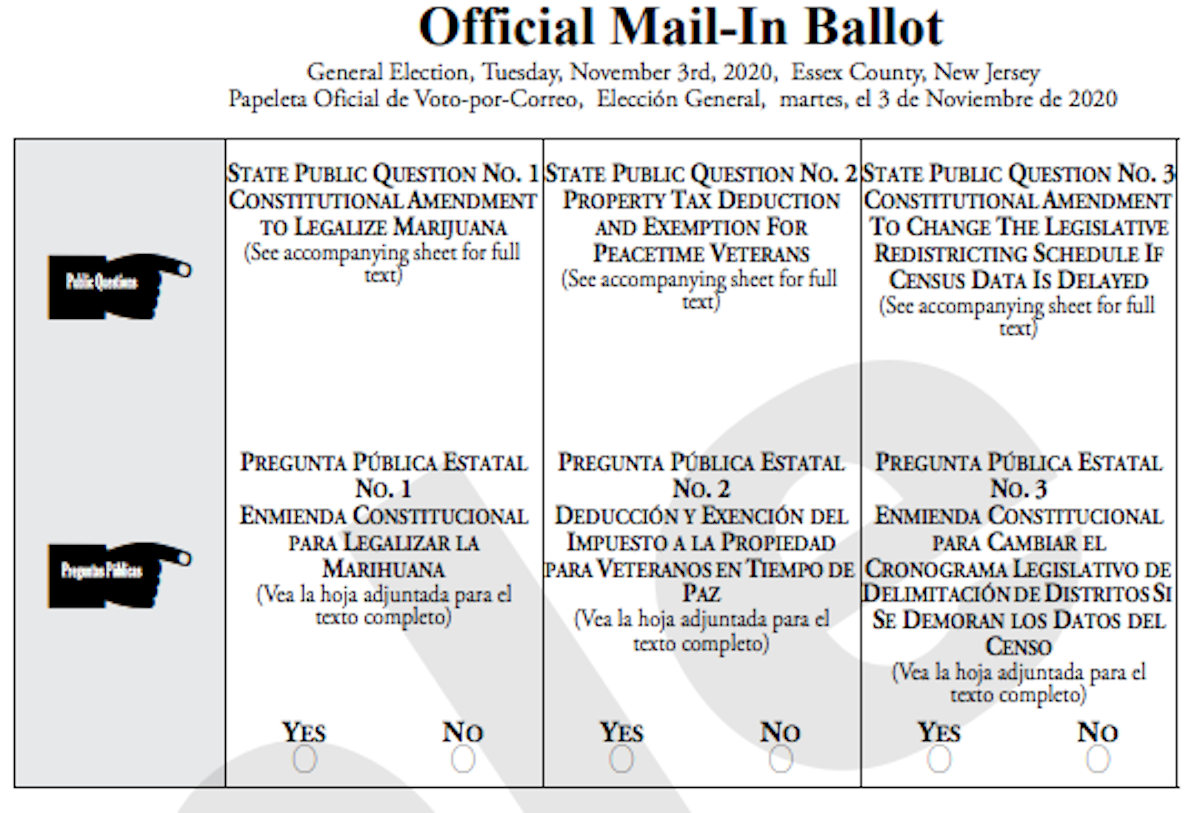 Of the three ballot questions New Jersey voters are being asked to consider this year, North-JerseyNews.com is endorsing yes on two of the measures and a no vote to the third.

The “yes” endorsements are for the legalization of marijuana and the allowing of veterans to receive property tax deductions. The “no” vote would not allow for the delay in redistricting of New Jersey legislative districts.

When it comes to allowing recreational use of marijuana by people age 21 and up, the approval comes down to economics, social justice and common sense.

For the economy, the state and local municipalities need new revenue sources in order to continue services at levels we have become accustomed to. Marijuana would be taxed and regulated by the same state commission that currently runs New Jersey’s medical cannabis program.

Additionally, the state Legislature could authorize municipalities to enact individual ordinances to place an additional local tax on cannabis products on top of a state sales tax. A 2019 legislative fiscal analysis, taxes on sales of recreational-use marijuana could generate around $126 million annually based on the state sales tax of 6.625%, with the potential to be much higher as municipalities would be allowed to charge cannabis businesses an additional 2% tax.

Legalizing marijuana we believe will help end racial disparities in the enforcement of drug laws as well. Gov. Phil Murphy, who is supportive of the ballot measure, recently stated that it costs the state $150 million to processing marijuana arrests in New Jersey every year, “arrests that disproportionately impact young people of color and make it harder for them to get a job, a place to live, even a credit card.”

As for common sense, we believe it is analogous to sports betting in New Jersey: everybody has a “guy” if they want to do it. The time has come for the state to be the “guy” to go to and receive its cut.

With the approval, those who served during peacetime—as well as their widows—would receive a $250 tax deduction. Veterans who became permanently disabled during peacetime military service would get a 100% exemption.

As a society, there is never enough we can do to help our Veterans when they return home. This is a small measure that helps those who defend our freedoms at home and abroad.

Finally, North-JerseyNews.com believes you should cast a “no” vote to delay the redrawing of New Jersey’s legislative districts if population data collected during this year’s U.S. Census is delayed.

The need for a ballot measure is a result of the Census Bureau asking Congress to extend the deadline to July 31, 2021 due to the COVID-19 pandemic. Due to the off year elections unique to New Jersey, this only affects the state races. Congressional districts would not be affected by the delay.

If approved, New Jersey would delay redistricting—which is done every decade following the Census count—for two years, until after the 2021 election if New Jersey receives its census data after Feb. 15, 2021. This would allow state legislators to run for two-year terms in their existing districts.

But the actions by the governor and legislative leaders since March have revealed deadlines and hard dates can be worked around. The state has moved back and consolidated voting days—most notably delaying the primary a month to July 7—and budget deadlines.

Those are options that should be explored more extensively than delaying the drawing of new legislative maps. We urge you to vote “no” on this ballot question.