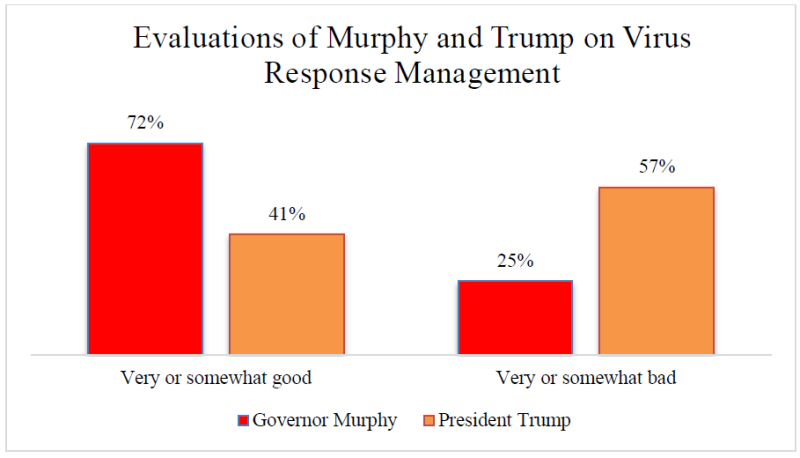 A recent poll by Fairleigh Dickinson University (FDU) found when it comes to the handling of the coronavirus pandemic, the approval numbers for Gov. Phil Murphy and President Donald Trump are going in opposite directions.

Seventy-two percent of Garden State residents say Gov. Murphy is doing a good job managing the state’s response, with 33% who say he’s doing a very good job, and 39% who rate his performance as somewhat good.

Murphy’s handling of the pandemic has improved his job approval rating as well, with 60% voicing approval as compared to 31% disapproving. The last time the same question was asked back in February, Murphy approval was underwater at 42%.

As with his handling of the pandemic, Murphy has a broad-base of support including among independents (53%), men (56%), non-Hispanic whites (52%) and the less educated (60%). His lowest support comes from Republicans at 31%.

Politically speaking, this is all good news as the governor gears up for re-election in 2021.

“Despite what can only be described as an unprecedented health and economic crisis facing the state, his leadership is appreciated by large majorities across New Jersey,” said Krista Jenkins, director of the FDU poll and a professor of politics and government at the university. “More than half still regard the state as heading in the right direction, despite the sizable obstacles that exist for the foreseeable future.”

The polling outfit noted when the question about handling the COVID-19 crisis was asked in June, 67% of residents approved of Murphy’s performance.

In contrast, New Jerseyans are not satisfied with the actions of President Trump, with 56% disapproving of the federal government’s handling of the pandemic and 41% rating the response under Trump’s leadership as very bad.

Those responding to the poll found President Trump has the support of a majority of Republicans but no other demographic group.

By a more than two-to-one ratio, New Jersey adults say they have a great deal of trust in the accuracy of the information that they receive from Murphy (33%) relative to what they get from the President (15%).

When combined with those who say they have some trust, those numbers are doubled—69% trust Murphy versus 34% for Trump. Again, only Republicans give President Trump high marks for his trustworthiness in delivering accurate information to the public.

Beyond state and federal leaders, respondents gave high marks to the credibility of information that comes from government run websites, such as those from the Center for Disease Control and Prevention (70%), and from doctors and scientists (89%).

“For the most part, it looks like New Jersey residents are rejecting challenges to scientific experts when it comes to whom to trust for information about the coronavirus,” said Jenkins. “Their embrace of information from medical professionals and websites run by scientific experts shows how hollow the attacks on science are in the Garden State.”

The survey was conducted by live callers on both landlines and cellular phones between Sept. 30 through Oct. 5 with a scientifically selected random sample of 846 New Jersey adults.