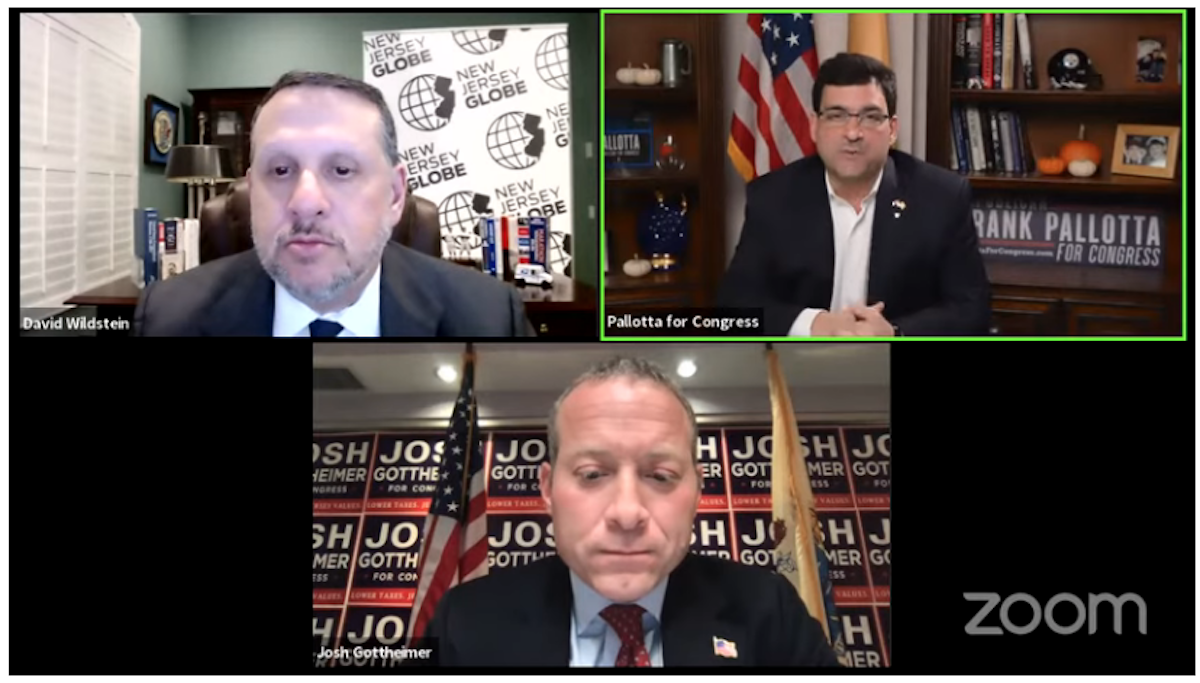 In their last debate before the Nov. 3 election, Rep. Josh Gottheimer and GOP challenger Frank Pallotta squared off on issues that have defined the bitter race between the two.

The candidates on Oct. 25 clashed on such issues as the ongoing response to the COVID-19 crisis, their experience in the private sector, healthcare and federal aid in New Jersey.

The sharpest exchange came after Gottheimer called for Pallotta to denounce supporters who have been linked to the Oath Keepers, an organization designated by the New Jersey Office of Homeland Security and Preparedness as domestic terrorists, as well as other right wing extremists groups.

“We should all standup to denounce violence and hate for key components for who they are, especially when there is a growing threat in New Jersey,” said Gottheimer.

Pallotta denied the assertion that the Oath Keepers are a right wing terrorist group.

Pallotta said the focus should be on left-wing groups such as Antifa and the Black Lives Matter organization, which he alleged Gottheimer had failed to denounce.

“My supporters are my supporters. They’re not racist, they’re not xenophobes. They’re not homegrown terrorists,” said  Pallotta. “That is your deplorables moment, Josh. You can’t do that to people in your district.”

Gottheimer believes it does, saying “hate is up to the highest level in many, many years. You go on social media and see the problem in two seconds…we are seeing in groups like the Oath Keepers virulent racism and we need to keep working to combat it.”

Throughout the debate, Pallotta painted Gottheimer as being out of touch with the district. Pallotta charged that the two-term congressman is more beholden to those whom he has received donations from, out of the district organization such as hedge funds and private equity firms from Wall Street, than residents of the 5th district.

Gottheimer attempted to use the GOP challenger’s background in the private sector against him. The congressman continued his campaign charge that Pallotta, who is running a self-funded campaign, made his money off the subprime mortgage industry that ripped of veterans and seniors while working at Morgan Stanley. It is a charge that Pallotta has vigorously denied.

In regards to the issues, there was a sharp divide on how to handle the coronavirus and well as how much federal aid the 5th district has received since Gottheimer was elected.

Gottheimer labeled Pallotta as a “a COVID denier,” chiding him for his lack of mask wearing in public while campaigning. The congressman said we should be following the science in order to get a handle on the spread so that the country could reopen the economy.

“There is a reason our numbers in New Jersey are so much lower than other states,” said Gottheimer. “We must follow the science.”

Pallotta cited Gottheimer for a lack of leadership in the early days of the crisis, specifically in not visiting the New Jersey Veterans Home in Paramus to offer support to frontline workers. The GOP nominee said mental health and economic need to be weighed equally with the science, pointing to the state’s low virus case numbers as justification for a larger reopening, despite New Jersey’s average daily caseload and positivity rate doubling since mid-September.

The issue of healthcare was another area of disagreement. Gottheimer argued that the Affordable Care Act must be strengthened and fixed where needed, including in areas such as prescription drug prices. Pallotta asserted that the only ones benefiting from Obamacare are insures in expressing support for the Trump administration’s lawsuit seeking to strike down the Affordable Care Act by the U.S. Supreme Court after the election.

Each candidate attempted to link the other to the congressional leaders in Washington. Pallotta wondered how Gottheimer could consider himself bipartisan after voting with Speaker of the House Nancy Pelosi over 90% of the time and only 6% of the time with President Donald Trump.

Gottheimer, who did not commit to backing Pelosi for Speaker in the next Congress, noted that his work with the bipartisan Problem Solvers Caucus he co-chairs has resulted in “my leadership doesn’t alway love my work with the other side…that’s ok because I work for the 5th district.”

The congressman promoted his record in the ability to clawback federal money to help towns in Bergen, Passaic, Sussex and Warren counties keep down taxes. Gottheimer noted when he first went to Congress, the district only received back 33 cents from every federal tax dollar went to Washington; he calculates that number now stands at $1.08.

Pallotta disputed that figure and said the congressman has failed in keeping his promise to lower taxes for North Jersey residents.

Gottheimer said he would keep fighting moocher states like Kentucky, where Senate Majority Leader Mitch McConnell in a recent debate celebrated his ability to secure funds for his home state at the expense of New Jersey.

“Time and again, the moocher states—these red states—they rip us off. We’re their piggy bank,” Gottheimer said, pointing to Republican opposition during New Jersey’s time of need, including the aftermath of Superstorm Sandy and McConnell’s calling coronavirus aid as  as a “blue state bailout.”

“I think the whole thing is a joke. We should be getting far more back here in New Jersey and getting our taxes down instead of sending these dollars to the moocher states who keep ripping us off and robbing us blind,” said the Democratic congressman.

Pallotta defended McConnell and federal aid distribution, saying “The money that goes back and forth to Washington, back and forth to the states is a function of GDP and the wealth of the states. New Jersey (does) pay more….and Mississippi and Kentucky and the others do get it—it’s fair.”