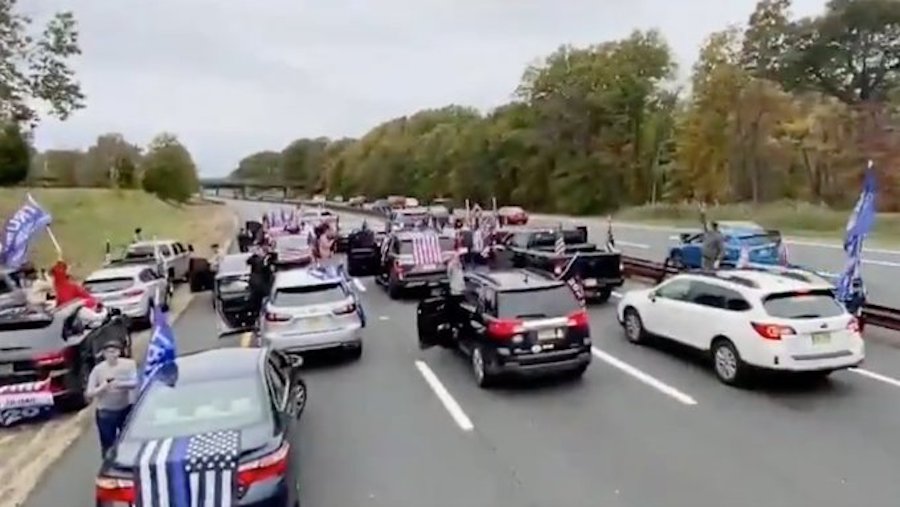 As a total of 3.5 million voters in New Jersey returned their ballots before Election Day, state officials said an investigation is underway in regards to the caravan of President Donald Trump supporters that disrupted traffic on the Garden State Parkway Nov. 1.

Gov. Phil Murphy and the head of the New Jersey State Police both labeled the actions of Trump supporters as “dangerous” when they blocked off the Garden State Parkway on Nov. 1. Troopers are looking at videos of the incident for possible motor vehicle violations.

“I just want to be clear that the situation on the Parkway was incredibly irresponsible and dangerous,” said Acting Superintendent of the New Jersey State Police Col. Pat Callahan at a press briefing Nov. 2. “There are plenty of ways for people to have their voices heard but when they endanger the lives of those out there traveling our highways, there really is no excuse for it.”

Callahan noted State Police on the scene did not issue any citations to any of the participants as their objective was to get that traffic moving.

“To start issuing citations and summonses out there probably would have hindered getting Parkway flowing north,” he said.

Murphy echoed the sentiments of Callahan, labeling the actions “dangerous and silly,” the latter due to the fact he did not understand what it accomplished.

“But a lot more weight on the dangerous side,” said Murphy. “Folks are welcome to protest…folks have generally done a good job. But they didn’t suck in other folks who were a part of it, put other people in harm’s way. What happened (Sunday) put innocent people not part of it in harm’s way.”

Murphy warned that law enforcement officials are on alert for any similar taking place around polling places on Election Day.

The 2020 election is the first time vote-by-mail has been used in New Jersey, offered to all voters in the Garden State as a way to avoid the spread of the coronavirus.

The governor said the vote total is 90% of those who voted in the 2016 Presidential election, when a total of 3.7 million votes were cast. The largest state total was the approximately 3.8 million votes recorded in 2008, when then Sen. Barack Obama received 2.2 million votes compared with Sen. John McCain’s 1.6 million.

“It is safe to say this election will be an all time record,” stated Murphy. “More ballots are arriving and being processed, so the turnout will go up.”

“It just proves that when you open up access to the ballot, and welcome every eligible voter and don’t try to disenfranchise voters, our democracy is made stronger,” said the first term Democratic governor.

Murphy did warn voters not to cast their ballots in the mail, instead he urged the use of a dropbox or handing in ballots to poll workers at voting sites.

The governor reiterated that provisional paper ballots will be available to those who choose to vote that way on Election Day, while calling out those trying to spread disinformation.

“Contrary to what some irresponsible officials have said, you can vote in person at a polling place in your community,” stated Murphy. “To be clear, anyone telling you that you can’t vote in person is just wrong, they are not telling the truth.”

“Your vote will be counted,” he said.

As for the rate of transmission, it decreased to 1.28 from 1.29 the day before. Officials have continually cited transmission rate and positivity rate as health data they rely on to track how the coronavirus is being contained in New Jersey, guiding them in determining when restrictions have to be tightened or lifted.

Of those hospitalized, 212 are in intensive care units and 100 on ventilators, while 103 patients were discharged.

Another 624 cases are still under investigation to determine where the person resides.

Health officials noted 188 long-term care facilities are currently reporting at least one case of COVID-19, accounting for a total of 4,705 of the cases, broken down between 2,610 residents and 2,095 staff.

The state’s official death total will now be reported as those that are lab confirmed, sits at 7,226 on Nov. 2. The facilities are reporting to the state 6,853 residents deaths and 121 staff deaths.