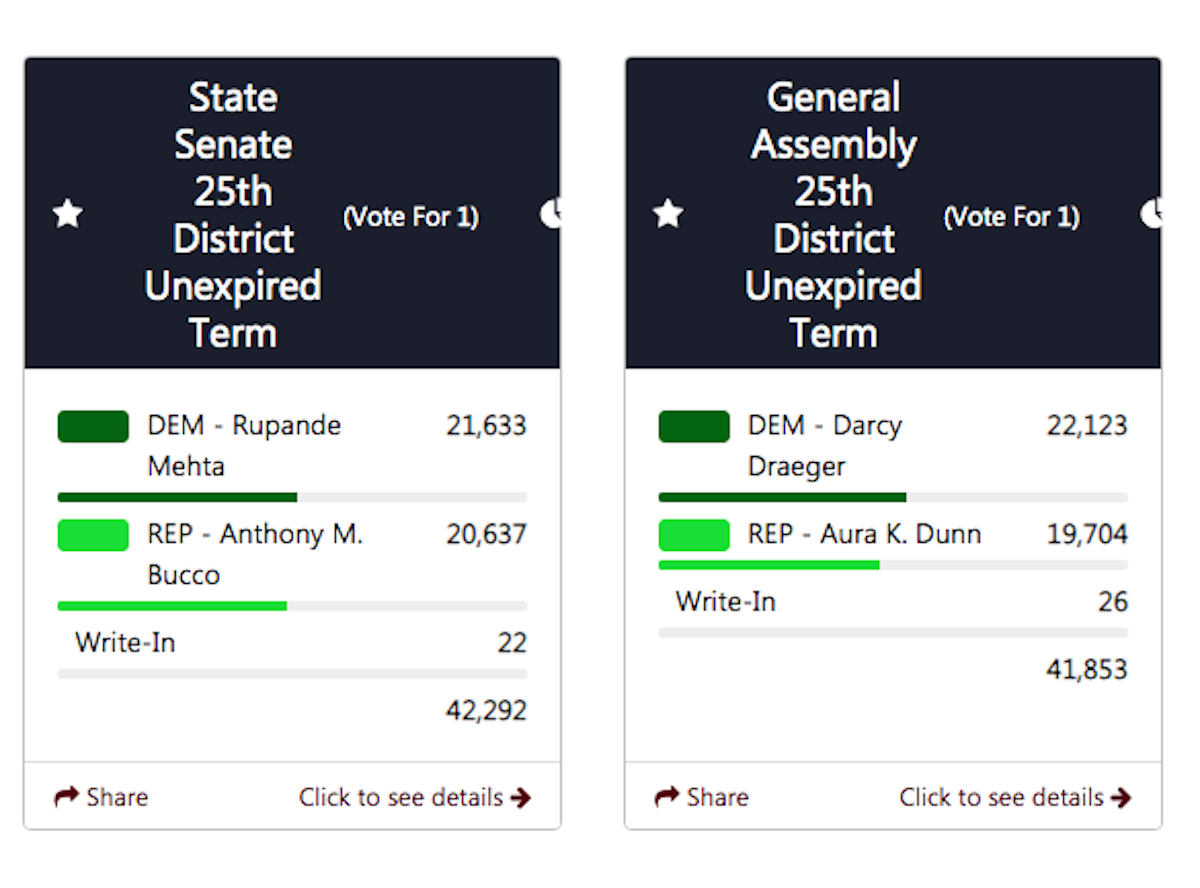 Besides electing a President, a Senator and Congressional Representatives, voters got their say on if New Jersey should legalize marijuana, offer property tax relief to veterans and delay the redrawing of New Jersey’s legislative districts.

With this year’s election primarily done through vote-by-mail due to the COVID-19 pandemic, ballots that are postmarked on Nov. 3 can be received by county clerk’s offices through Nov. 10. Then, the county clerk has until Nov. 23 to certify the results.

But the biggest story in North Jersey politics could be developing where two Democrats lead in the 25th Legislative District special election.

With just under 50% of ballots counted in Morris County, Democrat Rupande Mehta currently leads incumbent State Sen. Anthony M. Bucco (R-25) by 855 votes for the remainder of late State Sen. Anthony R. Bucco, the incumbent’s father as of 3 p.m. Nov. 4. In the race for the unexpired Assembly term created by Bucco going to the Senate, Darcy Draeger leads Assemblywoman Aura Dunn (R-25) by 2,289.

On the races decided on Nov. 3, voters approved all three ballot measures, giving the state Legislature the go-ahead to amend New Jersey’s constitution.

Nearly 67% of voters (1,735,733) said yes to allowing recreational use of marijuana by people age 21 and up. The approval gives the green light for marijuana to be taxed and regulated by the same state commission that runs New Jersey’s medical cannabis program.

In an Election Night tweet, Democratic Gov. Phil Murphy called the referendum’s passage “a huge step for racial and social justice and our economy.”

Although New Jersey seemed poised last year to legalize recreational marijuana use—a proposal that had support from Murphy and several Democratic lawmakers—it failed to pass and legislators agreed to put the issue before voters.

New Jerseyans gave the OK to the state extending property tax deductions to veterans who did not serve in wartime.

Voters gave the state permission to postpone redrawing New Jersey’s legislative districts until after the 2021 election if this year’s census data is delayed past Feburary 2021. Nearly 60% of voters (1,461,238) voted in favor.

The need for approval is unique to New Jersey due to it having off-year elections, The approval allows legislators to run for two-year terms in their existing districts next Fall. It does not affect the redistricting of House seats, which will take place in 2021 as well.

Under the current state law, New Jersey is required to adopt a legislative redistricting plan within a month of getting its census data.

Following the election, no significant power shifts will occur to freeholder boards in North Jersey.

On many boards, voters kept incumbents in office for another term. However, in Morris County, Democrat Cary Amaro currently leads Republican incumbent freeholder Tayfun Selen in an attempt to grab a seat on the GOP-controlled board.

Following is the results of the last Freeholder elections to be held in the Garden State. Starting Jan. 1, 2021, Freeholders will be known as County Commissioners going forward. An “*” denotes an incumbent.