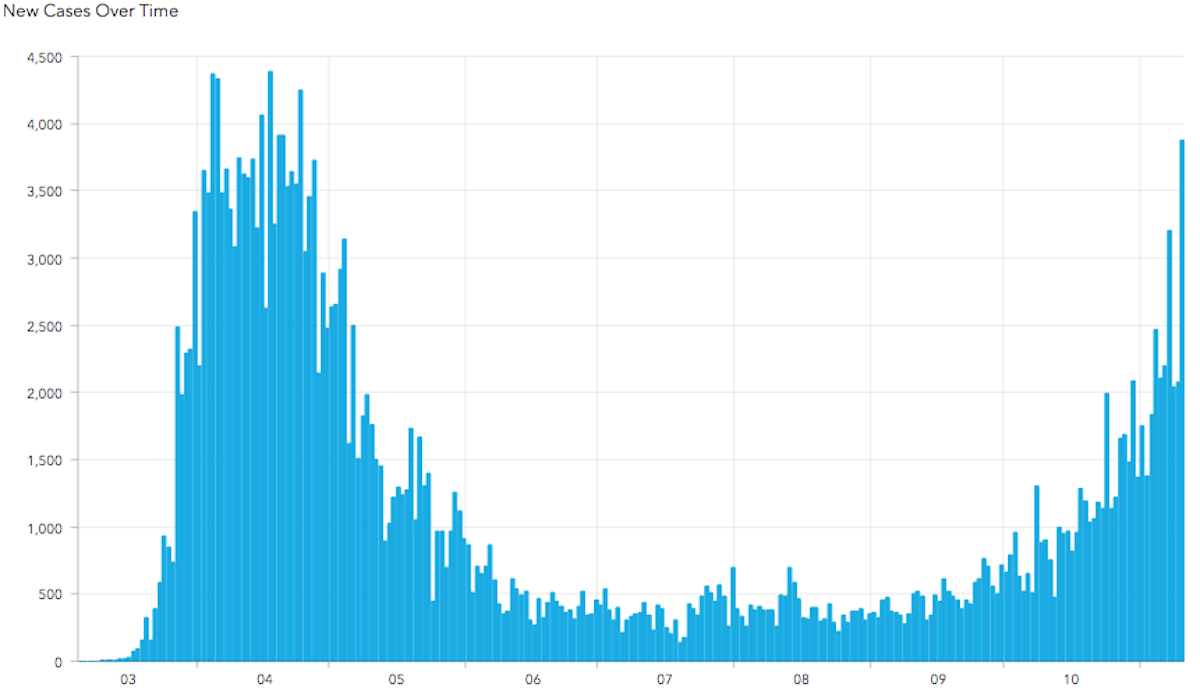 Gov. Phil Murphy called the new COVID-19 cases announced Nov. 10 “devastating” as the state’s health commissioner expects the daily New Jersey count in the thousands to be the new norm for the foreseeable future.

State officials reported today a six-month high of 3,877 of positive coronavirus test. While New Jersey Department of Health (NJDOH) Commissioner Judith Persichilli had warned an inflated number would be coming the previous day due to a reporting issue, the seven-day rolling average for new cases has increased 55% over a week’s time and 233% in a month to 2,568.

“I think our reality is that we will have between 2,000 and 3,000 cases a day going forward,” said Persichilli at a press briefing Nov. 9.

“Again, the numbers are proving that the second wave is here,” stated Murphy. “This is our reality. If we can get through these next…five to six months, we will be in a strong position to finally beat this virus with a vaccine.”

Murphy said he talked recently with Dr. Anthony Fauci, director of the National Institute of Allergy and Infectious Diseases, who was “unequivocal” that a vaccine would be ready by April or May, 2021.

“The good news is that a vaccine is on the horizon,” said Murphy. “I’m going to choose to be glass half-full here. This is not forever and always. We basically have a six-month window to beat the fatigue back and beat the virus into the ground. Let’s get through the remainder of the Fall and the Winter together. Let’s work harder knowing that if we can beat back this pandemic today, we can ultimately defeat it for good in the Spring.”

The statements came on the same day Pfizer released positive results about a vaccine they are working on and an antibody drug from Eli Lilly, similar to a treatment President Donald Trump received after contracting the virus, was granted emergency use authorization by the Food and Drug Administration.

“The news that we got …about the vaccine, if it holds at 90%, would be tremendous news,” said NJDOH’s Communicable Disease Service Medical Director Dr. Ed Lifshitz. “Virus vaccines for things like influenza, 40% to 60% is where it’s typically estimated its efficacy is. The FDA has said that they would approve any CVOID vaccine that was above 50% effectiveness, so 90% would exceed expectations.”

Persichilli said a key area of work to do is boosting confidence in this vaccine among the healthcare workforce. In a survey developed by the NJDOH’s educators and shared with the Medical Society of New Jersey, the New Jersey Hospital Association, and the State Nurses Association, 66% of the doctors would definitely or probably take the COVID-19 vaccine; 47% of nurses answered that they would take the vaccine.

Respondents who said science and vaccine safety were the top concerns, indicated they would be willing to get the vaccine at a later date when more data is available on the effectiveness and the safety of the vaccine.

“We need our healthcare heroes, who have been identified as the priority population, to get vaccinated to protect their patients, their families, and to help contain the spread of the virus in our state,” said Persichilli. “Given the level of vaccine hesitancy, the department knows that an important part of our job is to share the science and the data with healthcare professionals. We want them to feel more comfortable with getting the vaccine and recommending the vaccine to their patients once it is generally available.“

The daily rate of infections from those tested as of Nov. 5 was 7.5%. By region, the North has a rate of 8.5%, Central at 6.0 and the South at 8.0%. The state is no longer using serology tests as health officials explained those results show a past presence of the disease as well as a current one.

As for the rate of transmission, it increased to 1.25 from 1.24 the day before. Officials have continually cited transmission rate and positivity rate as health data they rely on to track how the coronavirus is being contained in New Jersey, guiding them in determining when restrictions have to be tightened or lifted.

Of those hospitalized, 327 are in intensive care units and 98 on ventilators, while 112 patients were discharged.

Another 598 cases are still under investigation to determine where the person resides.

Health officials noted 206 long-term care facilities are currently reporting at least one case of COVID-19, accounting for a total of 4,588 of the cases, broken down between 2,491 residents and 2,097 staff.

The state’s official death total will now be reported as those that are lab confirmed, sits at 7,244 on Nov. 10. The facilities are reporting to the state 6,871 residents deaths and 122 staff deaths.