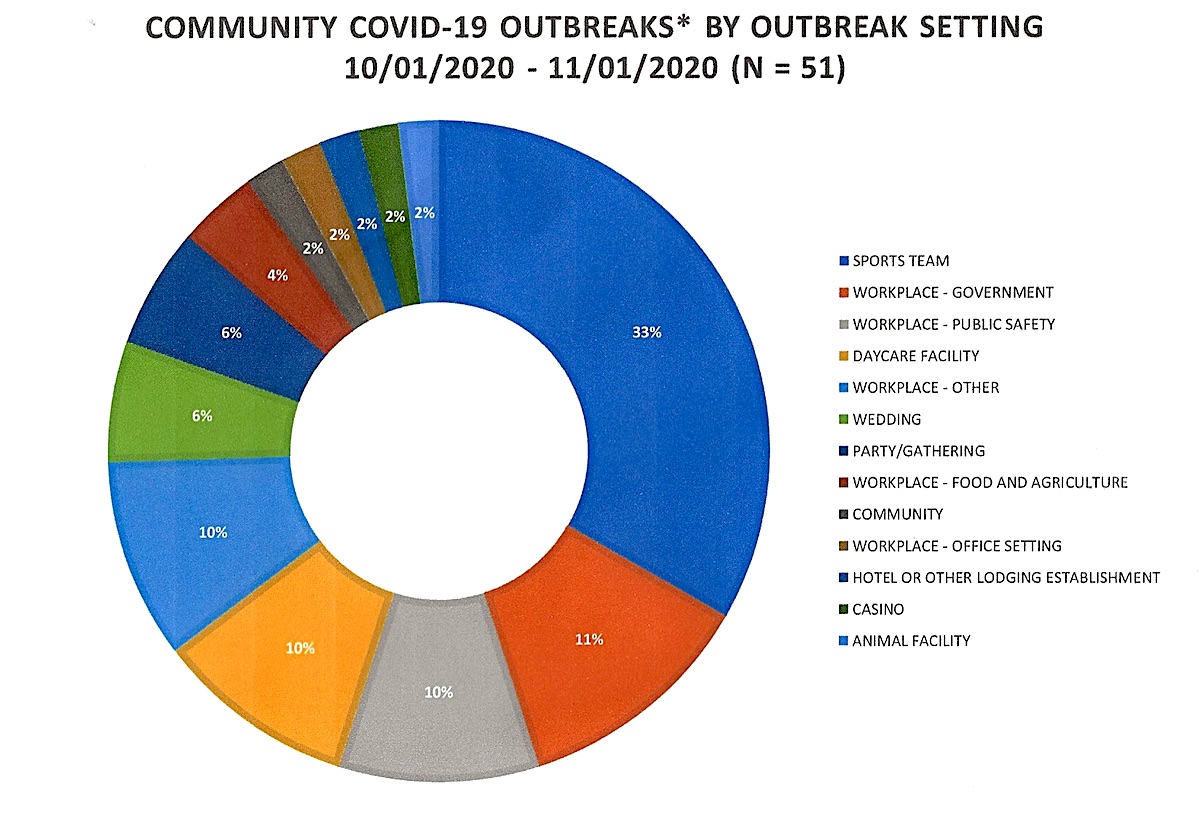 State officials gave their most detailed look behind the reasons they placed restrictions on youth sports and indoor dining in the last week.

Commissioner of Health Judith Persichilli said since the beginning of October, the state was able to trace 14 outbreaks among hockey teams in seven counties—including Bergen, Morris and Passaic counties—leading to more than 70 positive cases.

“Youth sports continue to be a challenge,” said Persichilli at a press briefing Nov. 12 where Gov. Phil Murphy announced an agreement with six other Northeastern states banning interstate tournaments. “The goal of these revisions is to slow the spread of the virus among our youth participating in these activities.“

Besiden sports teams, Persichilli detailed that recent gatherings, many linked to Halloween parties, have led to nearly 70 cases, including one in Union County reporting 30 cases and another in Gloucester to 22 cases.

In 164 outbreaks from March 20 to Nov. 1 that excludied long-term care and healthcare facilities as well as schools, contact tracing revealed 17% were among sports teams, 13% were party and gatherings, 12% were daycares, 10% were other workplaces, 9% were farms, 14% in the public safety workplaces, 7% were food and agriculture workplaces, 5% were weddings, 5% in government workplaces, 3% were warehouse workplaces, 3% were faith-based organizations, 2% were workplace office settings, 2% were the general community, 2% were camps and 1% each at animal facilities, hotel or other lodging and casinos.

A deeper dive showed 51 outbreaks occurred during the month of October, with 33% among sports teams, 11% in government workplaces, 10% each attributed to workplaces, public safety, daycare facilities and other types, 6% at weddings, 6% at party and gatherings, 4% at food and agriculture workplaces and 2% attributed to the community office setting, hotel lodging, casinos and animal facilities.

Murphy stressed that health experts do not believe the spread is not from the playing of games but activities surround the contests.

“We aren’t sure that it’s actually coming from the sports activity, it’s more likely it’s an adjacent activity, but in any event, it is unquestionably coming,” stated the governor.

“(But) we know that there has been transmission linked to youth hockey team activities and with numbers rising across our region, this is an important step to mitigate further community spread and protect public health,” said Murphy, who earlier in the week signed an executive order prohibits indoor interstate sports competitions in the state, youth leagues through high schools, and using a out-of-state neutral site for a game between two New Jersey-based teams.

State officials noted 24 deaths occurred in the last 24 hours of reporting that have not yet been lab confirmed.

The daily rate of infections from those tested as of Nov. 8 was 12.2%. By region, the North has a rate of 13.0%, Central at 12.0 and the South at 10.8%. The state is no longer using serology tests as health officials explained those results show a past presence of the disease as well as a current one.

As for the rate of transmission, it increased to 1.32 from 1.30 the day before. Officials have continually cited transmission rate and positivity rate as health data they rely on to track how the coronavirus is being contained in New Jersey, guiding them in determining when restrictions have to be tightened or lifted.

Of those hospitalized, 359 are in intensive care units and 129 on ventilators, while 243 patients were discharged.

Another 639 cases are still under investigation to determine where the person resides.

Health officials noted 216 long-term care facilities are currently reporting at least one case of COVID-19, accounting for a total of 4,552 of the cases, broken down between 2,408 residents and 2,144 staff.

The state’s official death total will now be reported as those that are lab confirmed, sits at 7,247 on Nov. 12. The facilities are reporting to the state 6,875 residents deaths and 122 staff deaths.