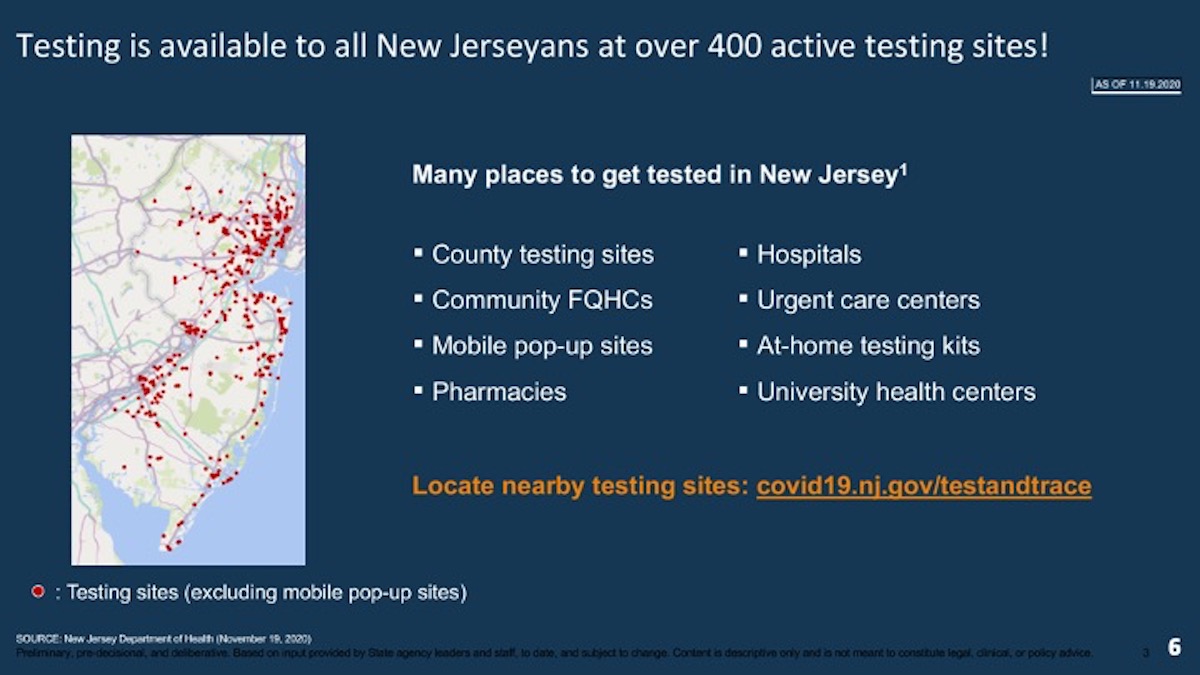 New Jersey is in a better place in its ability to report and track down the coronavirus as cases begin to rival those seen last Spring, according to Gov. Phil Murphy.

“We are in a far, far different place than we were at the early stages of this pandemic,” said Murphy at a press briefing Nov. 20. “We have the resources to continue to not only ensure a full testing regime across the state, but to ramp up testing when hotspots emerge.”

The governor outlined the state recently hit a one-day high of 70,000 tests and for the month of November is averaging 45,000 PCR tests per day. That total does not include Binax NOW rapid antigen tests, which Murphy noted does not report its results into any central healthcare databases.

“We have the testing program in place, and it is working overtime,” said Murphy. “We have the resources to continue to not only ensure a full testing regime across the state, but to ramp up testing when hotspots emerge.

With reports of long lines to get tested in the Garden State growing as the second wave hits the U.S., Murphy encouraged residents to get tested on a weekend as you “may encounter shorter lines and shorter waits at our testing facilities.”

Additionally, the first-term Democratic governor announced the state’s Department of Health is opening, collaborating with local leaders to stand up multiple sites in several hotspot areas. Among the municipalities hosting these pop-ups include Jersey City, Totowa and Union City.

“We encourage you, please, to get tested especially if you’ve been in a crowded indoor group setting where others have not been social distancing or taking proper precautions,” said Murphy.

But these workers continue to meet resistance from New Jerseyans that pick up the call.

“We continue to see a lack of cooperation with our contact tracers,” said Murphy. “The percentage of cases in which people refuse to provide any contacts for follow-up tracing continues to hover at about 60%.”

The governor reiterated the task of contact tracers is health only.

“Our contact tracers have a clear job. They’re not on a witch hunt,” stated Murphy. “(Their job is to make) sure you have the resources you need to safely self-quarantine and notify those who you may have exposed, so they can take steps to protect themselves and slow the spread of this virus throughout the community.”

As of Nov. 22, the cumulative number of coronavirus cases in New Jersey reached 306,007 with 8,677 total new cases reported over the weeknd and 49 new deaths during that time period, bringing that total to 14,949. The state listed probable deaths at 1,812, bringing the overall total to 16,761.

State officials noted 58 deaths occurred in the last 24 hours of reporting that have not yet been lab confirmed.

The daily rate of infections from those tested as of Nov. 16 was 8.0%. By region, the North has a rate of 8.2%, Central at 7.5% and the South at 8.8%. The state is no longer using serology tests as health officials explained those results show a past presence of the disease as well as a current one.

As for the rate of transmission, it decreased to 1.35 from 1.38 the day before. Officials have continually cited transmission rate and positivity rate as health data they rely on to track how the coronavirus is being contained in New Jersey, guiding them in determining when restrictions have to be tightened or lifted.

Of those hospitalized, 466 are in intensive care units and 237 on ventilators, while 297 patients were discharged.

Another 697 cases are still under investigation to determine where the person resides.

Health officials noted 285 long-term care facilities are currently reporting at least one case of COVID-19, accounting for a total of 5,242 of the cases, broken down between 2,615 residents and 2,627 staff.

The state’s official death total will now be reported as those that are lab confirmed, sits at 7,274 on Nov. 20. The facilities are reporting to the state 6,901 residents deaths and 123 staff deaths.

OPINION: Without Evidence, Time for President Trump to Allow Transition Process to Begin