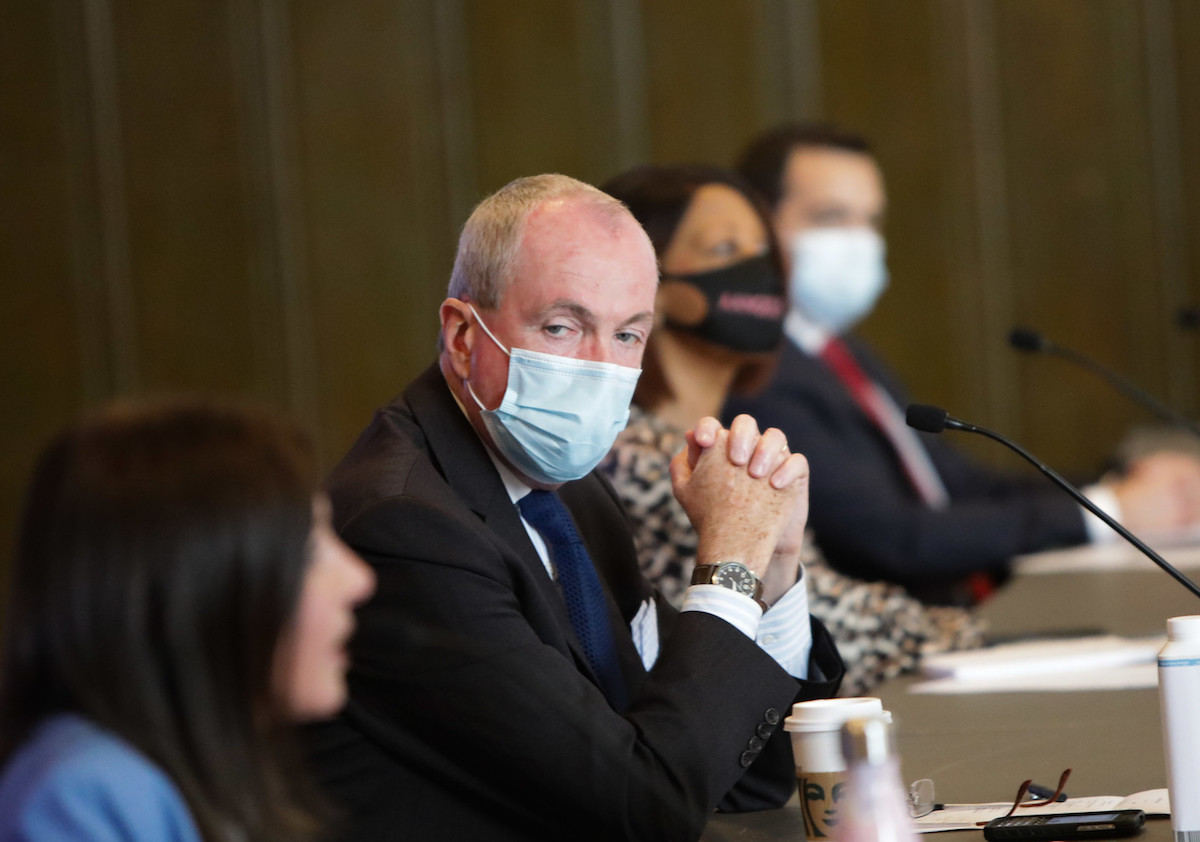 In his first comments since a viral video showed Gov. Phil Murphy being verbally abused by two women while dining out with his family, the governor sought to diffuse the incident.

“Let’s all keep each other in our prayers right now, because this is an extraordinarily stressful period that we’re in,” said Murphy at a press briefing Nov. 23. “Please God, like we always have as a country and as a state, there’s no more quintessential American state than New Jersey that we all come together, (let’s) find common ground and get to a better place sooner than later.”

Murphy confirmed he was dining outdoors in Red Bank on Nov. 21 when two women approached his table, which included his wife Tammy and his children. The six members of the Murphy party had their masks off as they were in the middle of eating their meal as per state coronavirus protocols. Towards the end of the video, the governor is shown putting on his mask.

Murphy remained calm during the 36-second confrontation filmed on a phone and shared on social media. The two women, not seen in the video, repeatedly cursed out the governor, with only Murphy’s son exchanging words with the women.

After pointing out the woman’s phone has a case designed related to President Donald Trump, the younger Murphy stated “Guess who Trump likes? He likes my dad.”

Murphy recounted that nothing happened preceding the incident and a third friend removed the women away. While declining to comment on the actions provided by the New Jersey State Police on the night in question, the governor expressed confidence in the work of his security detail.

The governor appreciated the support he had received from both Democrats and Republicans after the incident, but expressed apprehension about the incident in regards to the public arena.

“I’m a big boy (with) thick skin. That doesn’t impact me at all and I think I could say the same thing for my wife,” stated Murphy. “But let’s leave my family out of this.”

The first-term Democratic governor chalked up the incident as an outgrowth of the stress levels  overwhelming residents in the state on a level not seen since the attacks on Pearl Harbor.

“There are too many people out of work, too much economic hardship,” said Murphy. “I mentioned 16,500 families will have Thanksgiving…without a family member that was with them last year. Let’s all keep each other in our prayers right now, because this is an extraordinarily stressful period that we’re in.”

Murphy was later questioned about his message for progressive activists who harassed diners in Pittsburgh and Washington, DC over the summer or might be tempted to treat Trump administration officials such as Stephen Miller, Steve Bannon or New Jersey resident Jared Kushner in the same way.

“I don’t think this is the time we should be teeing off on people, and that goes for both sides,” Murphy replied. “You can imagine what I think of at least a couple of those folks that you mentioned. I understand the frustration, both from my beliefs and folks who are on my side of the aisle and I see it on the other side, even though I don’t agree with a lot of the policy pieces. That cannot be what we’re about right now.”

With the holiday season starting this week, Murphy is of the opinion now is the time to find common ground to get to a better place after an eventful year.

“This is a nation that’s been ravaged, torn in two. We’re going through a once-in-a-century pandemic, economic hardship unlike anything we’ve faced—again, 1930s, 1860s. Those are the two comparisons. Those are not good periods to be comparing yourself to,” said Murphy.

“On top of that, we haven’t talked as much about this lately, the national moment of reckoning, coming face to face with the stain of racism,” he added. “There’s a lot of moving parts right now and I think we should err on the side of giving each other the benefit of the doubt.”