At State of the State, Gov. Phil Murphy Offers His Vision to Move New Jersey Forward 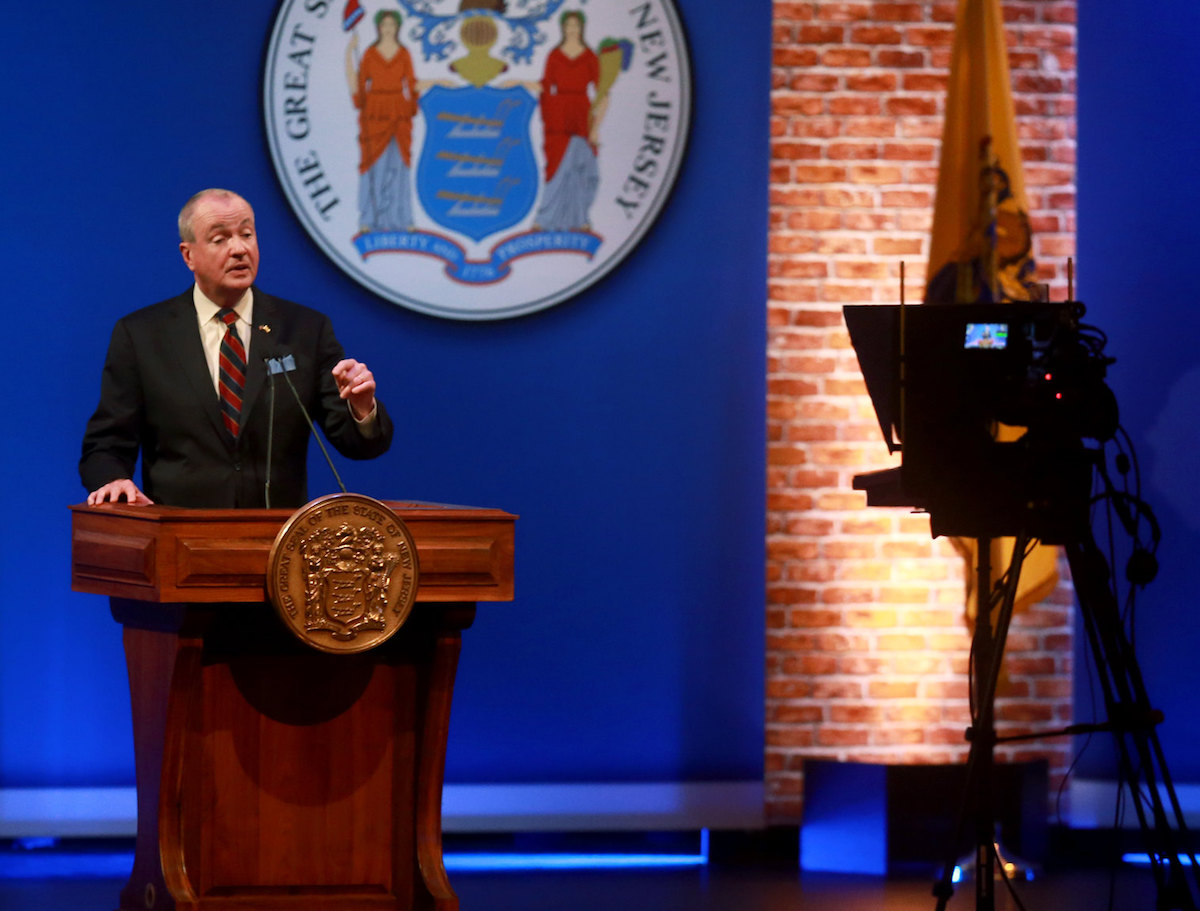 Gov. Phil Murphy delivered a virtual State of the State on Jan. 12, featuring a mix of accomplishments of his administration over the last three years as well as goals left undone as he prepares to campaign for a second term this year.

“Although wounded deeply, we enter 2021 tougher than ever, wiser than before, and ready to move forward together,” said Murphy in an address taped at an empty Patriots Theater at the Trenton War Memorial. “We are making the fight against COVID-19 one that engages every New Jerseyan.”

The governor later added “Everything, together, shows the promise of the new, post-COVID day that is just beginning to dawn. It’s a day we will enter not fearing what’s next, but knowing where we’re heading. And that direction is forward.”

For 40 minutes, Murphy extolled his vision, framed through his legislative victories since being elected in 2017 that he believes is enabling those that live and work in New Jersey to survive the pandemic and position it to grow on the other side.

“Three years ago, I took office with a pledge to rebuild New Jersey from the middle out and from the bottom up—to change the way Trenton works not simply for the sake of change but for the sake of people—to put working and middle-class families first,” stated Murphy. “That mission is now even more urgent.”

The governor rattled off new laws that have passed under his watch—raising the minimum wage, passing earned sick leave, expanding paid family and medical leave, making childcare more affordable, the millionaire’s tax increase, education and healthcare reforms—that he characterized as “real accomplishments that helped people across our state.”

“Together, we will continue moving forward, grounded in our shared everyday reality yet propelled by our optimism about tomorrow,” said Murphy.

The address, much like the last year, was dominated by the effects on coronavirus on the state. Murphy touted the COVID-19 vaccine program as leading the push toward a new normal.

“As our statewide vaccination program continues to grow, we will begin to see the light on the horizon get a little brighter,” he said. “Be assured, we will get back to being able to gather and celebrate with our families and friends. We will be able to see all our children back in the schools they love. We will see our economy recover and flourish.”

Murphy brought back one of his slogans from Spring—”Public Health Creates Economic Health”—to pivot to his economic agenda.

“Our small business community is the backbone not only of our local economies, but of our state’s economy,” he said. “The current economic emergency is something we haven’t faced since the great depression, 90 years ago, and the old ways of doing business weren’t going to build us back stronger or more resilient.”

“We set out to create a new system that is transparent and fair, which focuses not on huge corporations, but on job-creating small businesses and innovative startups,” stated the governor. “A system that, most of all, promotes good-paying, future-focused jobs.”

He then rattled off the initiatives of the bill, including a first-in-the-nation venture fund encouraging public-private investments, the state’s first historic preservation tax credit and incentives with strong protections for union workers.

Investment in infrastructure is key to rebuilding the economy in the next few years according to Murphy—and the change in Washington will help facilitate that in his eyes.

“When President-elect Joe Biden takes office next week, we’re going to begin working alongside him and his team to see the full Gateway program fulfilled—including the new tunnels under the Hudson River,” detailed the governor. “We are making historic investments in our roads and bridges…reimagining our airports and seaports.”

“Put together, we are embarking on the largest infrastructure investment program in the history of our state,” declared Murphy. “These transformative investments will reap tremendous returns for our economy, create good-paying New Jersey jobs, and attract new and innovative companies to the state that want a world-class infrastructure system.”

Part of that future includes clean energy, which Murphy believes the state is positioned to lead in.

A theme through the address was to ensure opportunities to those previously underserved, especially in colors of community and women, are at the forefront moving forward. He signaled out the funding women’s health care and family-planning services and police reforms as promoting these priorities.

“New Jersey is one that ensures and protects justice for all. A fairer New Jersey recognizes the powerful truth of the words Black Lives Matter,” he said. “We are attacking and ripping up the root causes of centuries of systemic racism. Given the national moment, we can—and must—choose to make our state a model for moving forward.”

The governor again committed to eliminating mandatory minimum sentences for nonviolent drug and property crimes as well as passing laws to reform “our historically unjust” approach to marijuana. While state voters approved the legalization in November 2020, disagreements between Murphy and lawmakers on udnerage penalties has delayed the bill from being signed into law.

“Two months ago, you voted overwhelmingly to legalize adult-use marijuana, and begin the process of ending the racial imbalance that disproportionately penalizes black and brown people arrested for marijuana offenses,” said Murphy. “This hasn’t been an easy fight, nor has it happened as quickly as I would have liked, but we are in a better place, a smarter place, and a more just place than ever before.”

Among the most partisan debated moves during the pandemic was the governor’s push for vote-by-mail during the 2020 elections. The governor revealed he will press further this year to expand the way New Jerseyans vote.

“Now, it’s time to take the next step, and I am already working with the legislature to enact a true, in-person early voting law, among other measures, to further open up our democracy,” said Murphy. “Regardless of your party affiliation, your vote is your voice and this country is better off when more of us are heard.”

The other hotly debated subject was education, where a digital divide slowed the progress of students especially in urban areas.

“I wish I could tell you that no child is falling behind in this disruptive year. But I can’t,” the governor stated. “That is why our focus must turn to ensuring our students have the academic and social-emotional support needed as they rebound from the stresses of the pandemic. We have already begun to direct funding to school districts that need the most help in getting students back on track.”

Murphy said as the pandemic has touched and challenged every corner of the state, his administration told ”the hard truths, made the hard choices, and never played partisan politics with people’s lives.”

The first-term Democratic governor warned the state can not afford to make the same mistakes prior officials made when facing economic uncertainty.

“Some in New Jersey are suggesting the same old failed policies of decades past. They forget that, after the last economic downturn, the prior administration cut taxes for millionaires, cut vital programs, left middle and working-class residents behind,” he said.

“As a result, we had the slowest recovery of any state in the nation. To blunt them, we must accept the fact that we can’t grow and strengthen the middle class by pulling the rug out from under it…we can’t cut and slash our way to growth and opportunity.”

Emerging from the Pandemic

Murphy finished by proclaiming that New Jersey has “always fought because we’ve always been the underdog. We’ve been counted out over and over again. But we’ve never been bowed, and we’ve never, ever failed.”

The governor noted all of the sacrifices residents in the state have shared will lead to a year and a future where dreams are once again possible.

“When we emerge from the darkness of the pandemic, together, we will be stronger, fairer, and more resilient than before, and we will be prepared to move forward as one state and one family,” he said.