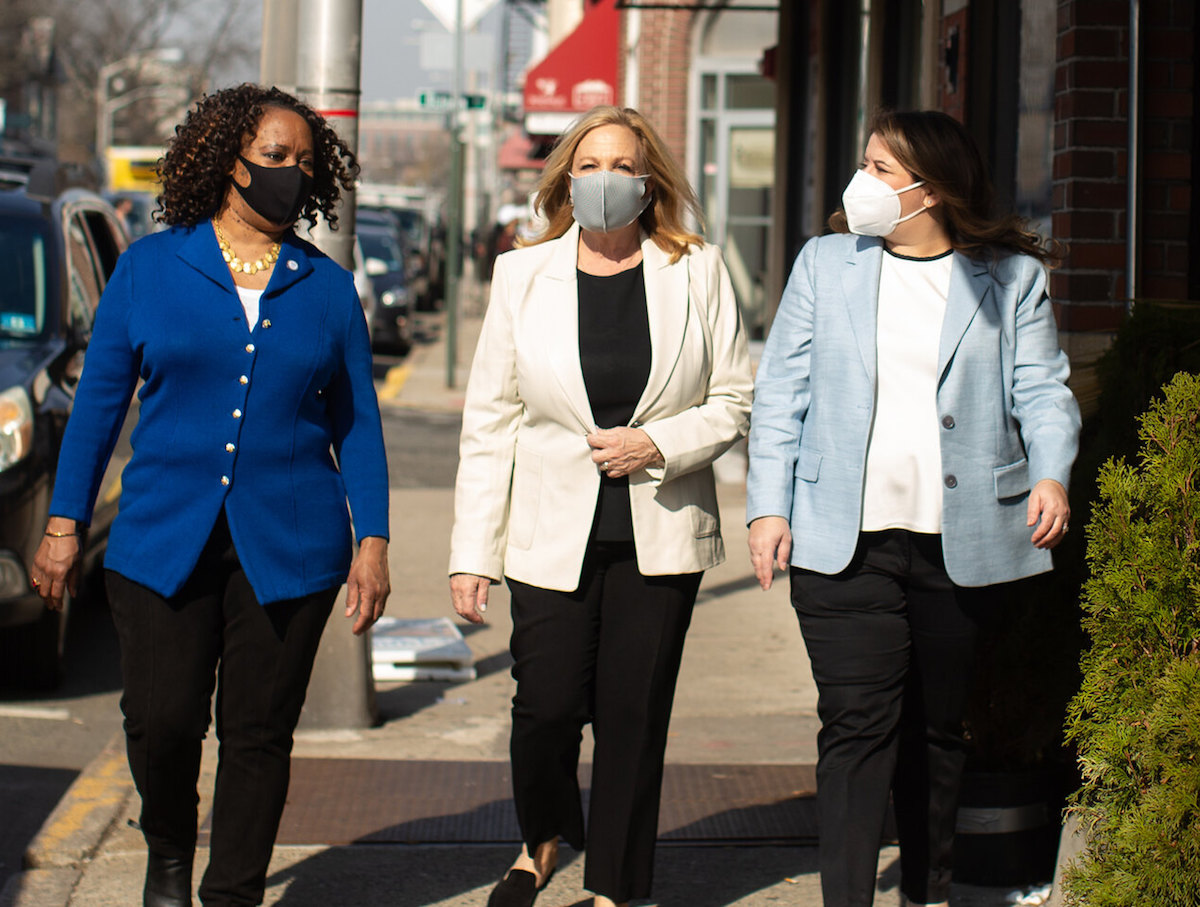 The choice to be the Democratic nominee for the 37th Legislative District is cut and dry for Valerie Vainieri Huttle’s running mates Gervonn Romney Rice and Lauren Kohn Dayton.

In an exclusive interview with North-JerseyNews.com, both candidates stressed their ticket continues to be active on the front lines fighting for important issues in the 37th Legislative District such as affordable housing, response to the coronavirus pandemic, healthcare issues and the rights of vulnerable populations.

“This is not a popularity contest, it’s about the people who have proven that they are willing to do the work and will continue to,” said Romney Rice. “We are not just in it for the sake of wearing a title…Our proven track record is what sets us apart. When you look at all the legislation that has been passed, Valerie has been in the forefront doing the work.”

Kohn Dayton added, “Gordon Johnson and Valerie Vainieri Huttle would vote “yes” on most of the same bills, but there is a big difference between just showing up to vote and then being the person behind the scenes doing the work, collecting the data, analyzing the policy, drafting the bill, to make sure it has a funding source, and that is Val. She is doing the work…Gordon just shows up to vote.”

Both candidates have stated there were overtures from country leaders to join Johnson’s ticket between the time after Teaneck Democratic Municipal Chair Alexandra Soriano-Taveras dropped out of the race due to anti-Semitic remarks and Palisades Park Mayor Christopher Chung decide not to seek an Assembly seat after a scathing state report on his town’s finances and former Tenafly Councilwoman Shama Haider and former Englewood Cliffs Councilwoman Ellen Park were elected at the Bergen County Democrats Committee convention this Spring.

“I began to hear more that I wasn’t the only one who was told to ‘Stay in your lane’,” said Romney Rice. “Realizing all the accomplishments that Val had, the bills and laws that she had sponsored and liking that to my own experience, why are we being told to wait? When the opportunity became available when the other ticket started falling apart, I still felt that the representation that Valerie had for our community was the right ticket.”

Kohn Dayton alleged as soon as she endorsed Vainieri Huttle in January, she was ruled out by the political boss for the county line because Johnson would be the candidate.

“There was no inquiry for my candidacy,” said Kohn Dayton. “New Jersey needs open elections with greater voter participation and informed voters. As we know, New Jersey ballots are uniquely and intentionally designed favoring one candidate over another. It gives and unfair advantage to the party line.”

“We need, as a community, to hold our elected officials accountable for the positions at our local, state and federal levels,” added Kohn Dayton. “But when people decide which candidates should be on the line before the voters do, that does not have transparent accountability. The voters need a fair choice.“

Romney Rice and Kohn Dayton’s pitch to Dem voters considering them for the Assembly is they are active members of government compared to their opponents. Kohn Dayton serves as council president in Tenafly and Romney Rice is in her fourth year as a councilwoman in Tenafly, after serving nine years on the borough’s board of education.

To that end, both recounted their town’s handling of the coronavirus pandemic in two of the hardest hit towns in the U.S., including setting up testing and vaccine locations to working with small businesses to ensure their survival.

“Tenafly got hit very early with a significant amount of death, really shaking me to my core,” said Kohn Dayton. “We lost our borough attorney early on, so it hit home personally and professional on every level.”

Kohn Dayton strived to bring leadership and give correct communication to her community, especially fighting misinformation in the early days of the pandemic and continues to this day.

“I can tell you it has reestablished my belief for the need for good government at every level. It matters who you elect on the local level, your state level, and your federal level,” said Kohn Dayton. “We saw very early on in Tenafly with our council focused on our needs—we got our senior center calling our residents, our homebound residents, ADA residents that could not get to testing.”

The Tenafly councilwoman added “ Throughout the year, we have focused on food insecurity, we created a program where our local downtown business once a week were fundraising and giving funds to those businesses, who in turn supply meals that we would deliver to the door to so many households here.”

For Romney Rice, the pandemic highlighted inequities for communities of color, with the top two being the digital divide and access to healthcare.

“Early on in our township, we held education forums to make sure our residents were informed that we were making good decisions,” stated the Teaneck councilwoman. “That was based on national data, as we saw communities of colors that were disproportionately impacted by the virus. Therefore we made sure that we provided education opportunities, doctors and experts to answer all questions could be answered for the Blacks and Spanish communities disproportionately impacted.”

“Here we are a year later, not just trying to make sure business survives but thrive post COVID in our new normal,” Romney Rice continued. “We are making sure vulnerable populations, the elderly, language barriers are met, to ensure herd immunity is a reality in our community.”

Kohn Dayton and Romney Rice said their legislative agenda would include issues they have dealt with at the local level, especially affordable housing.

“We live in communities in Tenafly and Teaneck where we have adopted our affordable housing plan,” said Romney Rice. “We are actively pursuing this because we feel it builds equality and social opportunities, delivering economic and educational opportunities for all.”

“As for the two Assembly candidates, I can tell you my community in Tenafly we reached an agreement on affordable housing. In Englewood Cliffs where Ellen Parks was, they did not and as a result they are mired in very expensive litigation because they did not make affordable housing a priority,” said Kohn Dayton.

Kohn Dayton went on to link affordable housing with the issue of environmental justice.

“We can’t just build houses on newly declared non-contaminated sites. We need to build affordable housing within the state that makes sense, that is ADA compliant for seniors,” said the Teafly resident. “We need to allow families to move in for access to our wonderful, quality schools here throughout New Jersey. Our residents should have the opportunity to move to homes to choose that education.”

Romney Rice said making sure the rights of vulnerable populations, promoted by Vainieri Huttle through her career, would be a priority in Trenton.

“Our communities are currently dealing with rises in hate crimes and intolerance—because we have such a diverse community, we really need to take a strong stand,” said Romney Rice. “Using the platform to fight racial injustice, as well as hate crimes against LBGTQ communities, to make them feel safe…we are very passionate about that. This is an area I will continue to advocate for.”

Kohn Dayton spoke passionately about the need to pass the Reproductive Freedom Act to ensure that women’s access to healthcare, maternal care equality, and reproductive rights remain a choice.

“Right now, healthcare has to be the number one issue. Both of us have done enormous work during the pandemic in our communities for vaccines and testing where we see the disparities,” stated Kohn Dayton. “The Reproduction Freedom Act helps reduce those disparities for healthcare. That is the best way to get our economy back, our communities back, our working families back…it’s a support system that just touches everybody.”

Despite the challenge of trying to win a primary off line during an off year election, Kohn Dayton and Romney Rice are confident they will be able to win over voters that they and Vainieri Huttle are the better choice for the district.

“Now more than ever, we need that strong, compassionate leadership representing all—not just those motivated by big businesses or legislative powers that want to push their agenda. We need those who are really committed to the constituents they serve and serving the people and their agenda,” said Romney Rice. “I believe there is no better time than now to serve my community in a larger capacity as an Assemblywoman for LD37. Valerie Vainieri Huttle has set things in motion for families and I feel a need to continue that legacy and the great work.”

“Val has earned the seat in the Senate for her many years of focusing on vulnerable populations,” stated Kohn Dayton. “Her legislative history and her sponsoring of bills for the elderly, survivors of domestic and sexual assault, mental health, LGBTQ, human trafficking, children, anti-bullying, her health initiative on opioids—there are so much that she has done for our communities. There is no better leader and consummate legislator that better deserves the Senate Seat.”

“Her leadership is what this state needs as we heal and try to open this economy up again,” said Kohn Dayton. “I think we are ready to be the leaders in the Senate and Assembly that our state needs.”