Rep. Tom Malinowski: More Important Than Ever to Attempt to Work With Willing Congressional Republicans 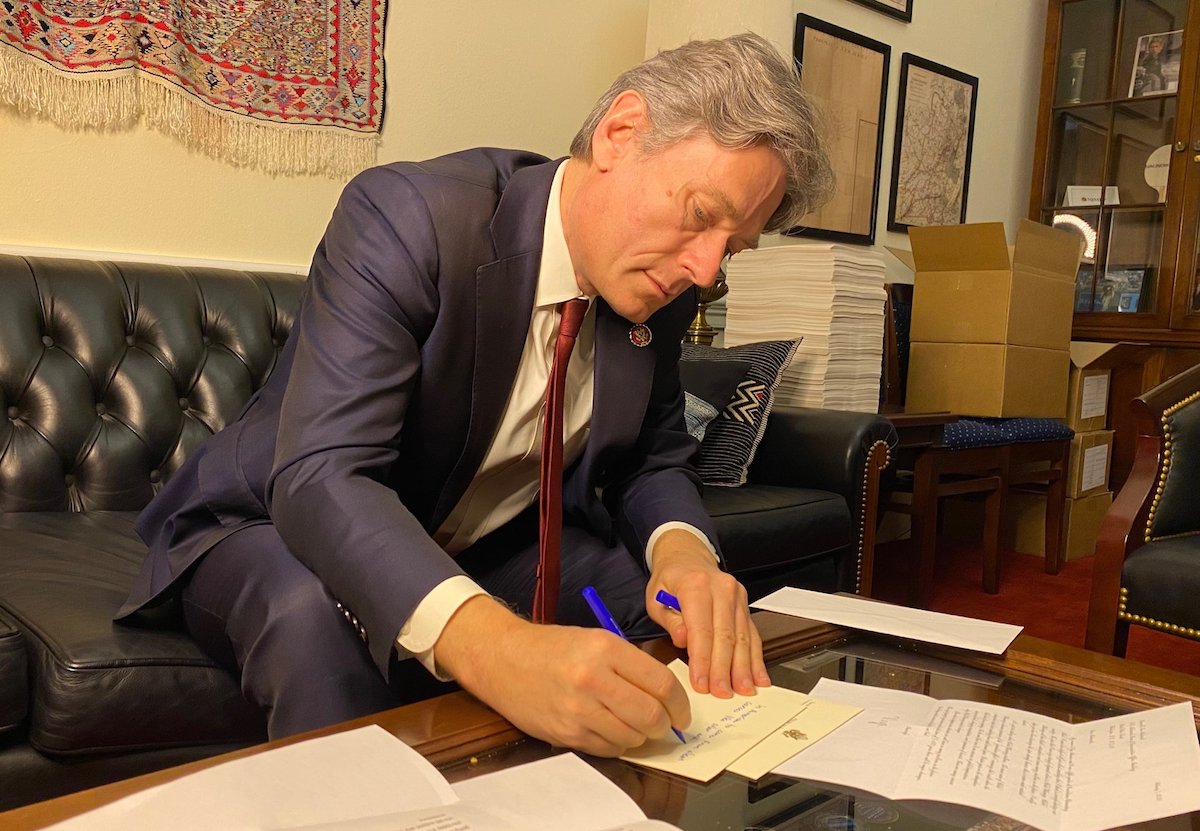 As he watched Republicans in the House remove Rep. Liz Cheney from a leadership position from her party, Rep. Tom Malinowski believes more than ever that Democrats should work toward bipartisan solutions with their colleagues across the aisle.

“We have to show the Republicans that still want to put their county first that there is good to be done in partnership with us,” Malinowski told North-JerseyNews.com in an exclusive interview this week. “I can’t work with a party but I can work with individuals…Democrats have to keep the lines of communication open.”

The Congressman continued, “There are many individuals in the House and Senate that I not only can work with but I feel I have an even greater obligation to work with them now precisely because of what is happening in (the Republican) party.”

After winning a second term in Congress and being a continued target by national Republicans for a seat they feel they must win to regain the majority, Malinowski said GOP House leadership actions this past week show the continued influence Donald Trump maintains.

“The party right now is purging and punishing anyone within it who has dared to stand up to Trump,” stated Malinowski. “What they are doing to Liz Cheney this week is totally emblematic to what their party has become. She is one of the most conservative Republicans in the House but that is not good enough for them because she refuses to lie about the election.”

Malinowski is realistic as he knows Republican votes will be needed to pass an infrastructure bill that contains both money for the Gateway project as well as eliminates the state and local tax (SALT) deduction he has pledged to do as part of the SALT caucus.

The congressman said besides Gateway, the American Jobs Plan proposed by President Joe Biden would be a wise investment to fixing the thousand other bridges and roads in disrepair, the needed update of water and electrification infrastructure, and the broadband access needed for the Garden State as well as the other 49 states in the nation.

“Much of this which will be made possible by this bill,” stated Malinowski, who joined the bipartisan Problem Solvers Caucus this year. “I would like to do infrastructure and transit bill in a way that accelerates the country’s transition from fossil fuels to clean energy. It’s a really important feature to what President Biden has proposed.”

For the former State Department appointee by President Barack Obama, he sees the U.S. investment as a way to regain its standing as a world leader.

“I think for our economic competitiveness not to mention the health of our planet, we need America leading the global transition to clean energy. I want to spend this money in a way that does that,” stated Malinowski. “It is 2021, I don’t want to spend all of this money just to rebuild the Eisenhower interstate highway system for the 28th time.”

Malinowski highlighted the investment in electric charging stations and upgrading the national electrical grid to deliver electricity generated by wind and solar to cars and homes as a job creator that is both good for the economy and the planet.

“We are going to have tons of people working doing those things… as the U.S. leads in the incredibly important global transition to clean energy,” he stated.

But even though he is part of the 20-plus SALT Caucus that has the ability to thwart any deal that does not include tax relief to residents of North Jersey, the congressman said there are a number of ways an infrastructure bill that funds Gateway and repeals the SALT cap can be accomplished.

“What a number of us have said, we can’t support legislation that would have a meaningful tax impact on our constituents unless it also addresses SALT,” said Malinowski. “We have made it absolutely clear—me, Reps. Gottheimer, Sherrill, Pascrell—to our leadership that we can not have a bill that raises our constituents’ individual taxes unless we address SALT.”

“We love and want an infrastructure bill great for New Jersey. But when it comes to pay fors, and we want to pay for this, we got to have SALT as part of the conversation,” he stated.

Congress is working on two parallel processes right now when it comes to infrastructure—one is considering the framework that President Biden proposed through the committees and conversations with congressional members to see if there is a bipartisan version that can pass with 60 votes in the U.S. Senate.

“If there is a bipartisan way forward, then I think a lot of us would support it,” said the congressman. “I think it would be good for the country if we could do this in a bipartisan way and that is why I joined the Problem Solvers Caucus this year.”

But Malinowski is keeping the option open of having Democrats going it alone to get their legislative priorities passed.

“There is a path through budget reconciliation to get some of the other key priorities like childcare, easing the student loan burdens for our constituents through the process,” he said. If a bipartisan bill can not garner 60 votes, “we are more likely to end up with a very large bill that would get passed by the majority.”

“I just want to get things passed. I really don’t care how and I don’t think my constituents care how. I just want to get good bills to the President,” added the Hunterdon County resident. “So whatever works, works for me. I want to deliver for New Jersey and the country.”

Malinowski cited other key priorities this year include taking a step forward on voting rights and getting meaningful gun violence legislation passed.

But one issue that the congreemans is personally pushing is an effort to address extremism through social media. The bill is borne from the death threats that Malinowski faced during the campaign last year after the National Republican Congressional Committee aired ads accusing him of lobbying to protect sexual predators when he worked for Human Rights Watch.

The Protecting Americans from Dangerous Algorithms Act is designed to hold social media platforms with more than 10 million used accountable for their algorithmic amplification of harmful, radicalizing content that leads to offline violence. The bill narrowly amends Section 230 of the Communications Decency Act to remove liability immunity for a platform if its algorithm is used to amplify or recommend content directly relevant to a case involving interference with civil rights; neglect to prevent interference with civil rights; and in cases involving acts of international terrorism.

“The bill addresses how social media algorithms are designed to amplify extreme content because these companies just want more eyes to the screen to sell more ads,” said Malinowski. “The way to do this is to promote content that we are already angry about. In the narrow circumstances when their algorithms amplify content that leads to serious violence, that is what we are trying to do.”

The congressman pushed back on the notion that the bill is an attack on free speech and the First Amendment.

Malinowski noted there is no expectation under the 1st Amendment that promises “Random House will take my crazy ideas and publish them in a book, or that Fox or CNN will give me a primetime show or Facebook will use their algorithms to promote my thoughts to millions of people.”

“I am concerned about how the biggest companies of the world have designed a system that takes those most hateful words to deliver it to the largest number of people,” he said.

Delivering for the 8th

The congressman knows that he faces another bruising campaign in 2022, with expectations of a rematch with State Sen. Tom Kean, Jr. whom he defeated by a margin of 5,000 votes. He is confident that his record of accomplishment in the two plus years in Washington will keep swing voters casting their ballots for him again.

“They have been with me twice in a row. I told them in 2018 and 2020 that I was going to fight for Jersey first, and that means delivering on things that the Republcian-led Congress failed us on, beginning on infrastructure, healthcare costs and taxes,” he said. “We are going to deliver on infrastructure in a big way, we delivered on healthcares costs in the American Rescue Plan that will help  the middle class in New Jersey. And on taxes, we are fighting to get something solved.”

“I feel in less than two full terms I have helped to deliver more to my constituents than my predecessor in 10 years,” stated Malinowski. “We are at two out of three right now of things I promised and are hoping to get three out of three.”