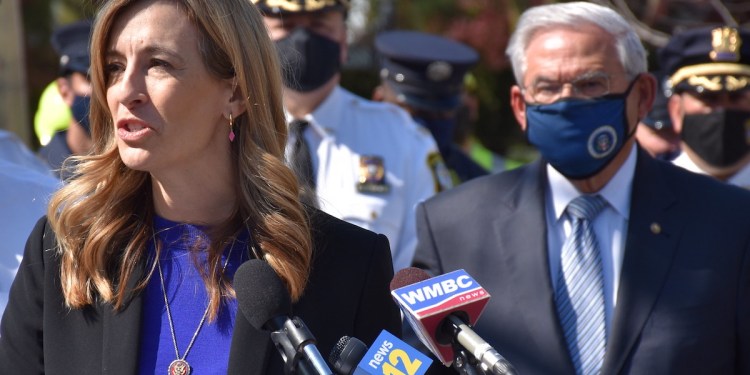 Sen. Bob Menendez and Rep. Mikie Sherrill both commended President Biden for delivering a message that the Russian President will be held accountable for his and his country’s actions on the world stage by the U.S.

“Today, Americans collectively sighed in relief knowing we have a President that understands the importance of standing up for our friends, defending human rights, and bluntly speaking truth to those who seek to do us harm,” said Menendez. “President Biden did his job and stood up for the American people by making clear that the United States will respond to Kremlin aggression where and when it happens.”

“This was a necessary reality check for Putin and a welcome departure from the past four years of (former President Donald) Trump’s coddling,” stated Menendez.

Sherrill proclaimed President Biden delivered “a crucial message to Vladimir Putin: the United States’ posture is very different than it was under the last administration. The President has made clear that the United States is willing to cooperate where our interests align, but will no longer allow Putin to act with impunity.”

“From human rights to cybersecurity and cyberwarfare, President Biden stood strong and declared that there will be consequences when Putin disregards international norms or human rights.”

Presidents Putin and Biden met in Switzerland on June 16 for three hours of talks. In separate press conferences, both expressed a desire for a better relationship without any significant actions to improve tensions seen to be at their lowest since the Cold War.

The two presidents committed to the creation of working groups to deal with urgent issues, starting with arms control and the proliferation of cyberattacks, agreed to send ambassadors back to each other’s capitals, and expressed interest in working in some areas of mutual interest, from the Arctic to Afghanistan.

President Biden revealed he handed the Russian leader a list of 16 examples of “critical infrastructure,” and had made clear that if they were attacked, “we have significant cyber capabilities” and would respond “in a cyber way.”

Putin denied that Russia had been responsible for the range of attacks on the United States and asserted the American government was responsible for a far larger number of malicious cyber campaigns than Russia.

Additionally, the Russian President refused to take any responsibility for human rights violations or the invasion of parts of Ukraine, and compared the imprisonment of political rivals to the killing of George Floyd by a Minneapolis police officer and prisoners being held at Guantánamo.

After the Russian leader’s comments, Menendez said it is time for the U.S. to be proactive in holding Russia in check.

“The onus is now on Vladimir Putin to shift course on a host of malign activities in Ukraine and Syria as well as cyber attacks against the U.S., and human rights abuses at home,” stated the U.S. Senator. “In the likely event that Putin does not change his behavior, I fully expect President Biden to take assertive, but appropriate measures in response.”

Menendez welcomed the establishment of the Strategic Stability Dialogue and hoped substantive progress can be made to reduce the risk of armed conflict.

“President Biden made clear his administration understands the critical principle that we have to engage with Russia on arms control issues to ensure a nuclear war never happens,” he said. “The Senate Foreign Relations Committee will continue to conduct rigorous oversight of Russia policy to ensure that the administration’s rhetoric matches its actions.”

Return to Leading the World

Sherrill said as a former Russian policy officer in the Navy, she knows that the only thing that Putin understands is power-politics. The Congresswoman was reassured there is “finally an American president with the ability and the willingness to hold Putin accountable.”

“President Biden is right—it will be months before we know if the message works and will rein in Putin’s nefarious actions. But after four long years, it is clear that America’s leadership in the world is back on track,” said Sherrill.

“This past week of meetings with our allies at the G7 and NATO, and with Russia, amounted to a clear message to the world that the United States is resuming its standing as a leader in the world.”